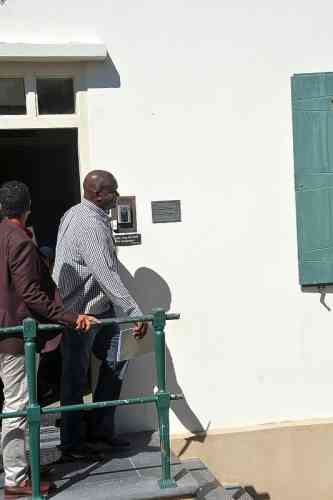 PHILIPSBURG–In its efforts to make an end to vote buying during election campaigns in St. Maarten, the Prosecutor’s Office on Wednesday called for a prison sentence of two years and a five-year disqualification from the right to run as an election candidate for Member of Parliament (MP) Silvio Matser (51).

Matser and Pointe Blanche Prison Director Edward Rohan, who is facing nine months, three of which are to be suspended, on three years’ probation, and a third suspect will all learn their fates on February 21, when the Judge will pronounce the verdicts.
Matser did not appear in Court to answer to allegations of vote-buying fraud during the 2014 parliamentary election. His lawyer Cor Merx left the courtroom after the Court rejected his pleadings to annul his client’s summons, as these were not handed to him in person. Merx left the room as he was not authorised to speak on Matser’s behalf, who was then tried in absentia.

According to the Prosecutor’s Office, Matser and his campaign team, largely consisting of former detainees and members of the Inmates Association, had recruited votes during the election campaign among the prison population in exchange of payment of US $100 in canteen money on the Association’s bank account.
In two other cases inmates were promised taxi and beach licences in exchange for a vote on the then United People’s (UP) party candidate.

‘Octopus’ and ‘Grastelchi’
According to the Prosecutor, the campaign team should be considered a criminal organisation, but Matser had told the police the team primarily consisted of family members.

“Octopus” is the code name for the investigation into the alleged vote-buying in which main suspect Matser was arrested on March 2, 2016, after which he was held for 10 days.
Matser is accused of having made phone calls to prison Director Rohan to obtain information about the procedures at the House of Detention during elections and about the number of eligible voters with Dutch nationality among the prison population.
Rohan (52), who is suspended from his job since February 20, 2017, also appeared in front of a Judge in the Court of First Instance on Wednesday. He answered to allegations he had provided Matser with the requested information, which included a list of eligible inmates in the prison.

Rohan confirmed that such telephone conversations had taken place, but said several candidates had requested a list, as the Civil Registry had declined to provide the information.

In the so-called “Grastelchi” investigation, the Prosecutor’s Office found Rohan guilty of complicity in election fraud and of violation of the pledge of secrecy.
Rohan claimed he had not been aware that he was not allowed to divulge information of that nature, or that he was bound by a pledge of secrecy.
He said it was common practice during election time to provide political parties with voters’ lists, not just of eligible inmates, but of the entire population.

(Former) prison inmates Franklin Ash (47) and Edeson Fleming (37) are both suspected of having cooperated with the scheme in recruiting voters for UP or for Matser in exchange for payment of US $100 in prison canteen money, or the handing out of beach and market stall licences, or assistance in obtaining a chauffeur’s job.

In this way, some 13 prison inmates were approached with requests to cast their votes for UP, according to the Prosecutor’s Office.
Ash will be tried at a later date as he was not properly summoned, but Fleming was heard via a video-conference connection with the Netherlands, where he is currently detained. In his case, the Prosecutor called for six months.

Warned man
The Prosecutor said that Prison Director Rohan should have kept the voters’ list a secret and added that he should have known that vote buying is not allowed.
In the “Masbangu case” involving the buying and selling of votes on behalf of UP party in the September 17, 2010, parliamentary election the Joint Court had stated that vote buying in St. Maarten was “common practice.” Rohan, should, therefore, have been a warned man, the Prosecutor said.

According to the Prosecutor, campaigning is not allowed in prison, and Rohan “should have thought twice” before handing the voters’ list to his “old friend” Matser.
He said it was “remarkable” that the campaign leaders of several parties had apparently obtained Rohan’s permission to speak with the Inmates Association, and that the Association had provided them with the names of eligible inmates and with the prison’s bank account number.

Three other main suspects in this case were not indicted, the Prosecutor said. Rogelio Koeiman is sitting out a lengthy prison sentence in the United States. Then Chairman of the Inmates Association Robelto Gumbs and then inmate Franky Brunache were killed in 2015 and 2016, respectively.

The Prosecutor said it was irrelevant whether the inmates involved in the scheme had actually voted for the then building contractor Matser, or not.

Second chance
According to the MP, Fleming and Brunache were lying, he told the Police. Matser had said in a statement that he had wanted to give ex-convicts a second chance by giving them a job in his company.

“In fact, however, he wanted to give himself a chance and let down the people who helped him obtaining a seat in Parliament, albeit by committing crimes,” the Prosecutor said.
On January 11, 2017, Matser and his now defunct company Energizer NV were convicted of tax evasion by the Joint Court of Justice. For these crimes, committed between January 2006 and October 2010, Matser was sentenced to 22 months, 18 of which were suspended, on three years’ probation. An appeal is still pending with the High Court of the Netherlands.
Rohan denied he had played any role in vote buying. “I know for 1,000 per cent that I have nothing to do with this,” he told the Court. “I am unjustly dragged into a case in which I am not involved.”

His attorney, Brenda Brooks, pleaded for her client’s acquittal, who she said was a victim of the Prosecutor’s Office’s “tunnel vision.”
She said it was “common practice and nothing out of the ordinary within the establishment to provide voters’ lists to campaigning politicians.”

Brooks claimed that the voters’ list had never been found, and said it was not established that Matser had received substantially more votes among the prison population. She said there were no rules against making lists of eligible detainees available.
She said Rohan, who “had no relation with Matser or the UP organisation,” had never made the canteen money account available.

‘Dragged through the mud’
“My client is being dragged through the mud and his reputation is tarnished. He is no politician and never favoured any particular politician. The inmates campaigned heavily and very successfully for Matser. It cannot be legally and convincingly proven that Rohan played any role in election fraud,” said Brooks.

Via a video-conference link from Curaçao, attorney Marije Vaders claimed that Fleming’s rights were violated, as she did not have the opportunity to discuss the case with her client, who is currently detained in the Netherlands.
She said Fleming may have been a member of Matser’s campaign team, but he had not promised to vote for him. In fact, her client had voted for National Alliance’s candidate Silveria Jacobs instead.

Vaders claimed her client could not be linked to any payment or favour in exchange for votes and pleaded for her client’s full acquittal, including membership in a criminal organisation.

“I never gave money to anyone. I needed money, so it would not have made any sense for me to pay money. I campaigned for a politician with good intentions and a good heart, and not for a criminal organisation,” said Fleming.