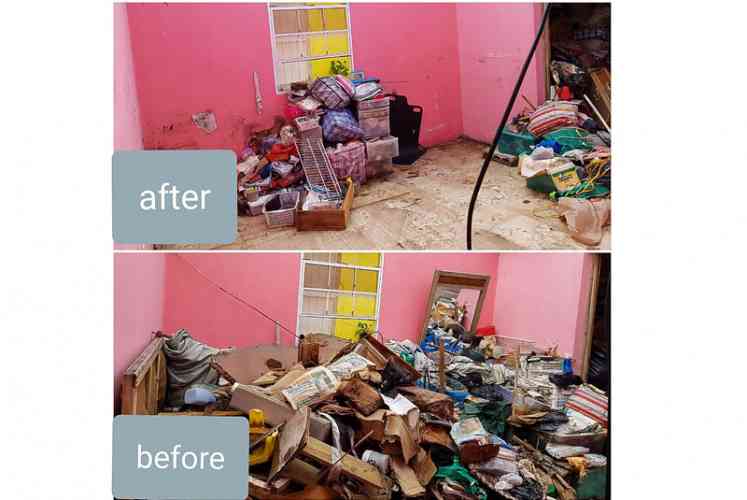 Before and after photos of one of the areas in the home.

Before and after photos of another section of the home.

A before and after photo.

The group of volunteers who assisted in the clean-up with family members.

ST. PETERS–Tzu Chi Foundation St. Maarten volunteers rolled up their sleeves in September to clean mountains of debris left in the home of 79-year-old St. Peters senior Cherrie Hanna, during the passage of Hurricane Irma more than a year ago.

The woman’s home was not cleaned since the hurricane, which ripped away her concrete roof and wreaked havoc in her Grapefruit Road #5 home, destroying more than 90 per cent of her household belongings and lifelong possessions.

Hanna resided with her 58-year-old daughter Ursula Isidora, who had two brain injuries– one before Hurricane Irma (in the Netherlands) and one shortly after the storm in St. Maarten. Due to the severity of her injuries during the second attack, Isidora was transported to the St. Elisabeth Hospital in Curaçao after Irma. She was accompanied by her mother.

The two recently returned to the country and faced another challenge as their home remained in the same, if not worst, condition as it had been immediately after the hurricane. Due to medical challenges of the daughter and the advanced age of the mother, major cleaning was a challenge for the family. The stress of the situation was taking a toll on the mother and daughter.

Tzu Chi learnt about the situation of the family after its volunteer Regina Janga went to deliver “love rice” to the homes of persons in need in the St. Peters area. The volunteer was saddened by the situation of the family, whose home had become infested with rodents, due to the accumulation of debris for such an extended period. The volunteer reported the situation to the foundation and many volunteers responded to calls to assist in an emergency clean up, including the group of Chinese contractors working on the reconstruction project of the Sonesta Maho Beach Resort and Casino. Tzu Chi considered the clean up an emergency exercise.

A total of 25 volunteers participated in the exercise including 13 Chinese contractors from the Maho project; nine Tzu Chi volunteers and three Hanna family members, who worked straight for about four hours to clean up the premises.

A grateful Hanna was pleasantly surprised that the volunteers showed up to assist. Volunteers cleaned all areas in the home including the living room; storage room, two bedrooms and other areas of the home. Hanna and her daughter also assisted.

Although it was necessary, it was painful and emotional for the family to see many of their cherished memories from over the years, that had been completely destroyed during the hurricane, having to be carted off for disposal. At the end, two and a half truckloads of garbage including destroyed beds, televisions, closets, wall units amongst many other large items, had to be disposed of.

Following the clean-up, volunteers enjoyed a family lunch with the Hannah family, compliments of the Tzu Chi foundation and its volunteers. Hanna said she was very grateful and happy to Tzu Chi for the assistance. She said, she usually consumes a small meal, but she was happy to eat generously during the lunch, as she felt very good with the progress that had been made.

Tzu Chi volunteers were contented to see the look of relief on the faces of members of the Hanna family after the clean-up exercise. The volunteers expressed optimism that their support will give the family a sense of hope and wishes them the best as they continue to stand St. Maarten Strong to continue living their lives in the wake of the destruction caused on their family as a result of the September 2017 hurricane.

Before leaving, one of the engineers for the Maho project shook the hands of the homeowner and thanked her for the opportunity to help, on behalf of the group of volunteers.

Tzu Chi thanked all volunteers for coming out to assist in the exercise and thanked the Hanna family for accommodating the volunteers.