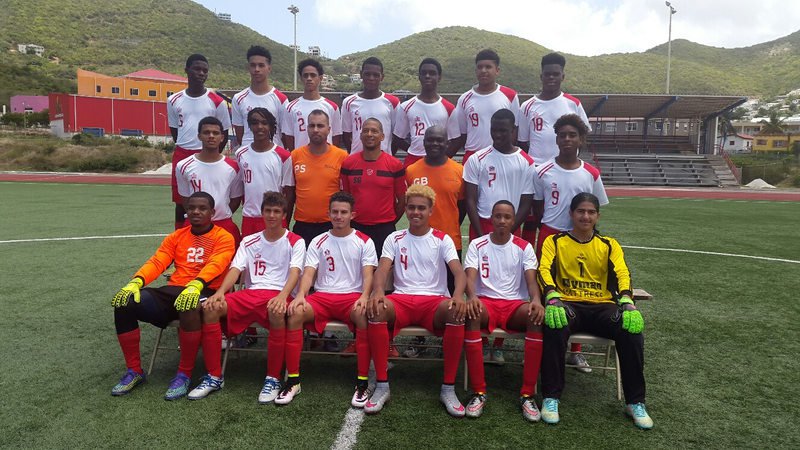 CAY HILL–St. Maarten U20 coach Sandro Garcia is upbeat about St. Maarten chances in qualifying for the next round after the 2016 Caribbean Football Union (CFU) U20 qualifiers which will be held on June 15, 17 and 19 at the Raoul Illidge Sport Complex in Cay Hill.

St. Maarten is drawn in Group One against some Caribbean footballing giants in Cuba, Puerto Rico and Antigua and Barbuda. But when asked about playing against these more established footballing nations, the coach responded, “Looking at the upcoming opponents and the size of their nations and sport culture, we are off course the underdogs but rest a sure that this team is ready to compete and will go to their utmost for Country St. Maarten.”
Coach Garcia who has been a certified coach/trainer since 2008 with a UEFA B/C License has been also working with the St. Maarten U13, U15 and Futsal teams.
According to the coach, the U20 team was assembled in April 22 this year. At that meeting, the following topics were discussed: selection process, house rules (discipline), the U20 tournament and goals and objectives of the team.
There were a total of 30 players who trained for about three weeks together and then finally cut to 19 players.
Concerning the actual physical and mental fitness of the team, the coach told The Daily Herald, “We organized practice games against senior teams aiming at increasing their experience and making them a physically strong and tactically smart team.” He gave further insight into training sessions by stating, “Focus during preparation was largely physical fitness. Players must be able to play three games in five days at top Caribbean level. We believe that they are fit and ready to play the coming games, with a short recovery period at an acceptable pace.”
Asked about the youngest and most experienced players on the team, the coach told this newspaper that “Our youngest player, Kerese Basil is yet to become 15 years and our most experienced player, Captain Djai Essed (18 years) was also part of the senior selection that competed in the Caribbean Cup in March this year.”
“Together with my fellow coaches
Peter and Guillaume we have been pushing this team to the max and could count on the support of the parents and guardians.” coach Garcia said.
The members of the squad had to balance preparation for exams and football practice which the coach is convinced is possible although some parents struggle to believe it could happen.
He was in high praise for the local soccer association in particular its president Sudesh Singh who was instrumental in having St. Maarten host another high profile football tournament in this year.
The schedule for the matches over the three days shows that on June 15 Cuba match skills with Antigua and Barbuda from 6:00pm and then the home team take on Puerto Rico from 8:30pm.
On June 17, Cuba will play Puerto Rico from 6:00pm and then the lads from the Friendly Island will take on Antigua and Barbuda from 8:00pm.
On the final day of the qualifiers, June 19, Antigua and Barbuda come up against Puerto Rico from 5:00pm and then St. Maarten clash against Cuba from 7:30pm.
The entrance fee is US$5.00 for each day.