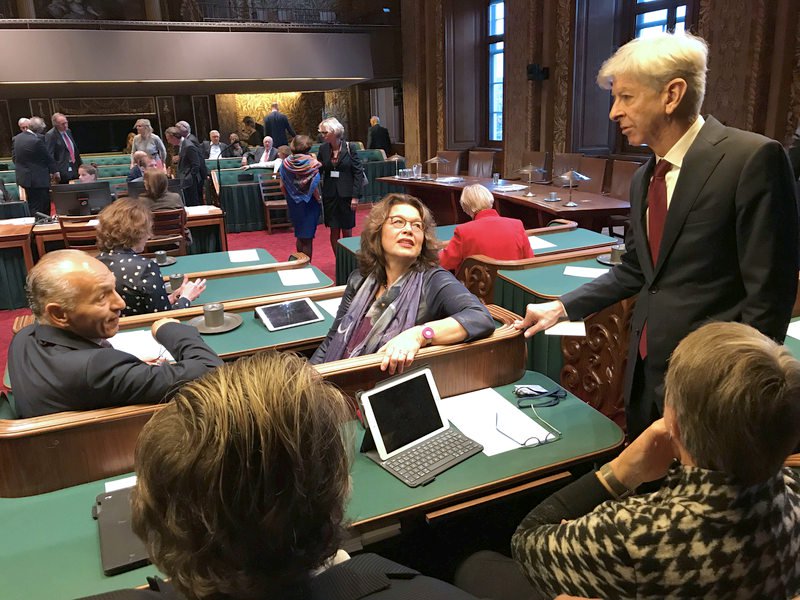 THE HAGUE–It seems that the law proposal to amend the Dutch Constitution to create a constitutional basis for Bonaire, Eustatius and Saba will receive a unanimous “yes” in the First Chamber of the Dutch Parliament.

The only party that was initially against, the Party for Freedom PVV, has also given its consent, it became clear during the handling of the law proposal in the First Chamber, the Senate, on Tuesday.

The Senate handled the law proposal in the second reading on Tuesday and is expected to unanimously vote in favour next week Tuesday. This is the final step in the lengthy process of changing the Constitution to secure the islands’ constitutional position and to secure the voting rights of Dutch residents for the Senate via a so-called Electoral College.

The embedding of Bonaire, St. Eustatius and Saba in the Constitution is an important recognition of the new constitutional relations and of the lasting connection with the Caribbean Netherlands, while at the same time leaving room for island-specific issues, Senator Ruard Ganzevoort of the green left party GroenLinks said during the plenary meeting on Tuesday.

Senator Sophie van Bijsterveld of the Christian Democratic Party CDA pointed out that an important consequence of this law proposal to amend the Constitution was that eligible Dutch voters on the islands would finally be able to have a say in the next elections of the First Chamber. This has not been the case since the islands became Dutch public entities on October 10, 2010.

Calling the law proposal “substantial, worthy and good,” Van Bijsterveld said that through the institution of an Electoral College (“Kiescollege”) in the Constitution, the influence of only persons with Dutch nationality on the composition of the Senate would be guaranteed.

Senator Meta Meijer of the Socialist Party (SP) pointed out that the manner in which the election of the Electoral College would take place still had to be fine-tuned. “We have the assurance that people don’t have to go to the voting ballot twice – the election of representatives in the Netherlands is not that popular to be asking this of the people.”

PVV Senator Alexander van Hattem expressed support even though his party’s point of departure remained “saying farewell” to all Dutch Caribbean islands. And even though his party did not feel the need to change the Constitution to accommodate a constitutional issue, the PVV did support the part of the law proposal to establish an Electoral College to ensure that only persons with the Dutch nationality residing in Bonaire, St. Eustatius and Saba could exercise an influence in the First Chamber elections.

Senator Thom de Graaf of the Democratic Party D66 remarked that this law proposal did not define the final constitutional position of Bonaire, St. Eustatius and Saba. The islands can still opt for another model – for example, becoming a municipality, although De Graaf didn’t expect this to happen.

During Tuesday’s meeting, the last one attended by Minister of Home Affairs and Kingdom Relations Ronald Plasterk, there was a lot of attention for the differentiation clause for the islands in the amended Constitution, which the Senate linked to the issue of having an acceptable level of provisions.

The including of the differentiation clause in the Constitution will not end the discussion on the dilemma of what exactly defines an acceptable level of facilities, said Senator Frank van Kappen of the liberal democratic VVD party. “There is broad support for the principle that deviating regulations for the islands are needed, but the discussion focuses on the question when the differences are justified and when there is a case of randomness,” he said.

Senator Mohamed Sini of the Labour Party PvdA called on the Dutch Government to keep in mind the equality of all citizens, including of those residing in the Caribbean Netherlands. He expressed hope that the embedding of the constitutional status of the islands in the Constitution would improve social-economic development and would lead to a better level of facilities, the eradication of poverty, more employment and better education. He reminded the Minister that poverty remained a problem on the islands and that this had an adverse effect on the children.

He called on the Minister to assure the people that they could count on an acceptable level of provisions and that these would be the criteria for the interpretation of the differentiation clause.

Senator Peter Ester of the ChristianUnion said the government had “made too little progress” on creating an acceptable level of facilities in the Caribbean Netherlands.

Henk ten Heave of the independent Senate party OSF said the differentiation clause was used “too little to provide space for the islands’ own circumstances and that it was used too much to save money in the social area and to treat the residents as second-class Dutch citizens.”

Senator Meijer pointed out that for many people in the Caribbean Netherlands the standard of living and the minimum wage were still way too low. She said it was all fine to secure the people’s voting rights for the Senate, but the government also had to ensure that their “elementary social rights” were the same as in the Netherlands.

“We ask these people to execute their voting right, but at the same time we don’t allow them to claim a social minimum,” said Meijer. She said she found it painful that “the people who were unable make ends meet, who sent their kids to bed hungry and who couldn’t pay their electricity bill” had to wait until next year for the results of the social minimum assessment. She hoped the next State Secretary would not tolerate this situation continuing.

Plasterk said the differentiation clause was “nothing new” and that it was also stated in the Kingdom Charter. He said that as departing Minister he did not find it fitting to make promises about the differentiation and the social minimum. He did say that it has always been government’s intention to make things better for the people of the Caribbean Netherlands.

He emphasised that the islands’ right to self-determination remained in place and that while the current proposal to amend the Constitution created a context for the constitutional position, this did not mean that the current status was etched in stone.  “The change to the Constitution does not impede another status,” he said.

All Senators thanked Plasterk for his input in the portfolio of Kingdom Relations, which they acknowledged has not been an easy task. The Senators also commended Plasterk for providing prompt and extensive assistance to the Windward Islands, especially St. Maarten, after Hurricane Irma.