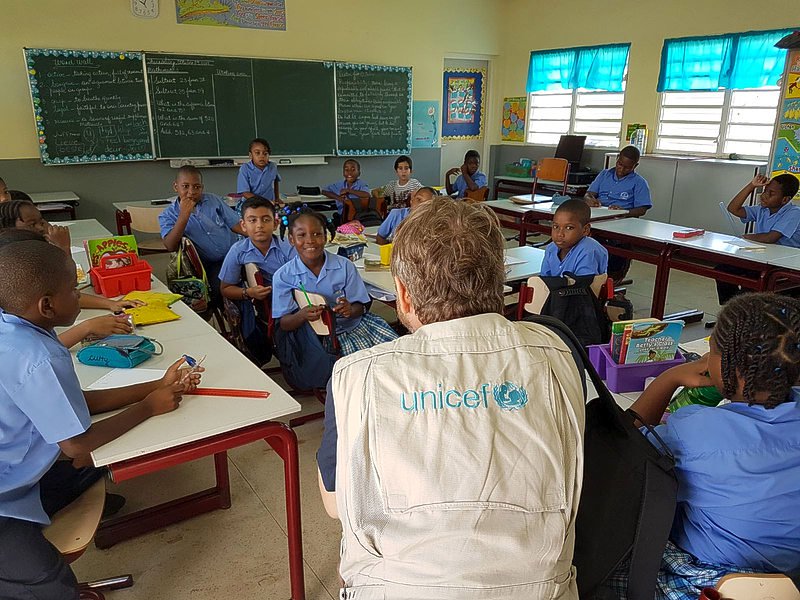 THE HAGUE–A team of the United Nations Children’s Fund UNICEF has been providing psychological assistance to teachers, pupils and students at a large number of recently re-opened schools in St. Maarten. More assistance of this kind is needed.

Victims of Hurricane Irma were able to share their stories about the disaster in classical talk sessions. Experts agree that aside from material aid, victims of a disaster of this magnitude also need psychosocial assistance. UNICEF is committed to provide this form of assistance.

“Most of the children respond very openly to the question how they experienced. One boy explained that he and his family had to wait in their bathroom for the storm to pass while everything in their house was smashed to pieces,” said UNICEF representative Bart Vrolijk in a press release issued by UNICEF Nederland.

Vrolijk, who worked in Syria for UNICEF in the past years and has been detached to the Caribbean, said every child with whom he spoke had indicated that he or she was happy to be in school again. “It gives them something to hold on to in the chaos that Irma left at home,” he said.

The UNICEF team visited many schools on the island this week. Vrolijk noted that many school buildings had been professionally repaired, mostly by the Dutch Army Engineers and other Defence personnel. “A lot of work has been done to fix everything so the children could resume classes,” he said. The schools that were completely destroyed by Irma and looted by criminals afterwards reminded him of the schools in Syria that were razed by bullets and bombs.

Vrolijk saw that many teachers in St. Maarten showed great resilience, but he also encountered mental strain. “Especially those teachers who also have been through the previous destructive Hurricane Luis in 1995 are especially anxious. It is a good thing that the opportunity is created to talk about this at school,” he said.

More assistance is needed after these initial psychosocial sessions, especially for the children. Some of them require more guidance and it is important that the teachers provide this extra attention to children in mental need as a result of the hurricane. The teachers themselves need additional support as well.

Children should learn more about the phenomenon “hurricane” so they are better prepared next time. Disaster preparation is something that should easily fit within the school curriculum. UNICEF is assisting the St. Maarten Ministry of Education to get this started. UNICEF is also part of the Government team that has been drafting the national recovery plan.

The need for psychosocial counseling was brought up during the visit of Dutch caretaker Minister of Home Affairs and Kingdom Relations Ronald Plasterk to St. Maarten earlier this month. A lot of emphasis was put on the social-emotional aspect of the aftermath of Irma during the Minister’s conversations with teachers and pupils at Oranje School.