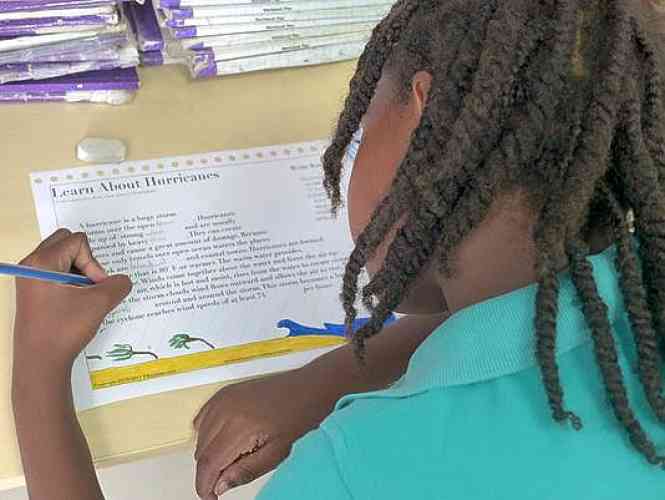 THE HAGUE–Three months after the devastating Hurricane Irma, the situation remains far from normal in St. Maarten, according to the Netherlands chapter of the United Nations Children Fund UNICEF. The organisation is particularly concerned about vulnerable families with children.

“Safe, child-friendly spaces are needed for children while their parents are working toward restoring their homes and income, and psychosocial support remains a need to deal with the impact of the disaster,” UNICEF Netherlands stated in a press release on Thursday.
“We are concerned about the vulnerable families with children; for example; the families who lost their income after the hurricane. Due to the stress we see an increase of aggression on the island, people now have a shorter fuse and children can become the victim of that,” said UNICEF Netherlands representative La-Toya Charles, who led the UNICEF mission on the island shortly after the storm.
“We emphasise the need for investments in education, afterschool care, sports and childcare so that there are enough places where children are in good hands and keeping busy with positive activities while their parents have time to work on the recovery of their home and income.”
The UNICEF team noticed after the hurricane that many schools and other centres for children could be better prepared for future disasters. For this reason, schools, day-care centres and foster-care institutions will be supported by UNICEF and the Red Cross in the development of emergency plans.
Psychosocial help is very important, according to UNICEF Netherlands. “After a disaster, help is needed for children and those who work with children to process the events. UNICEF will start with courses in the field of psychosocial support so that there is more capacity for now and in future disasters.”
UNICEF Netherlands commended the “enormous resilience” of the people and their Government. “It is an achievement that schools already reopened already early October and that all children were given the opportunity to resume their education so shortly after the hurricane.”
The Dutch Government and civil society organisations contributed to the reopening of the schools as well. On other islands that were hardly hit by the hurricane, such as Dominica, 35 per cent of children do not have access to education as yet, UNICEF Netherlands noted.
UNICEF has assessed the situation of children, teachers and staff in primary and secondary schools, day-care centres as well as residential homes, in close cooperation with the St. Maarten Ministry of Education and the Ministry of Justice. UNICEF advised the school principals and the Ministry of Education on how to resume education after the disaster. UNICEF participated in the team that developed the reconstruction plans for the education sector as part of the national plan.
According to UNICEF, it is important that schools and centres for children are built back better so that they are hurricane-resistant. Also, teachers, pupils and parents need to be prepared for future disasters. UNICEF will also continue to assist the St. Maarten Government to protect children against violence, abuse and exploitation.