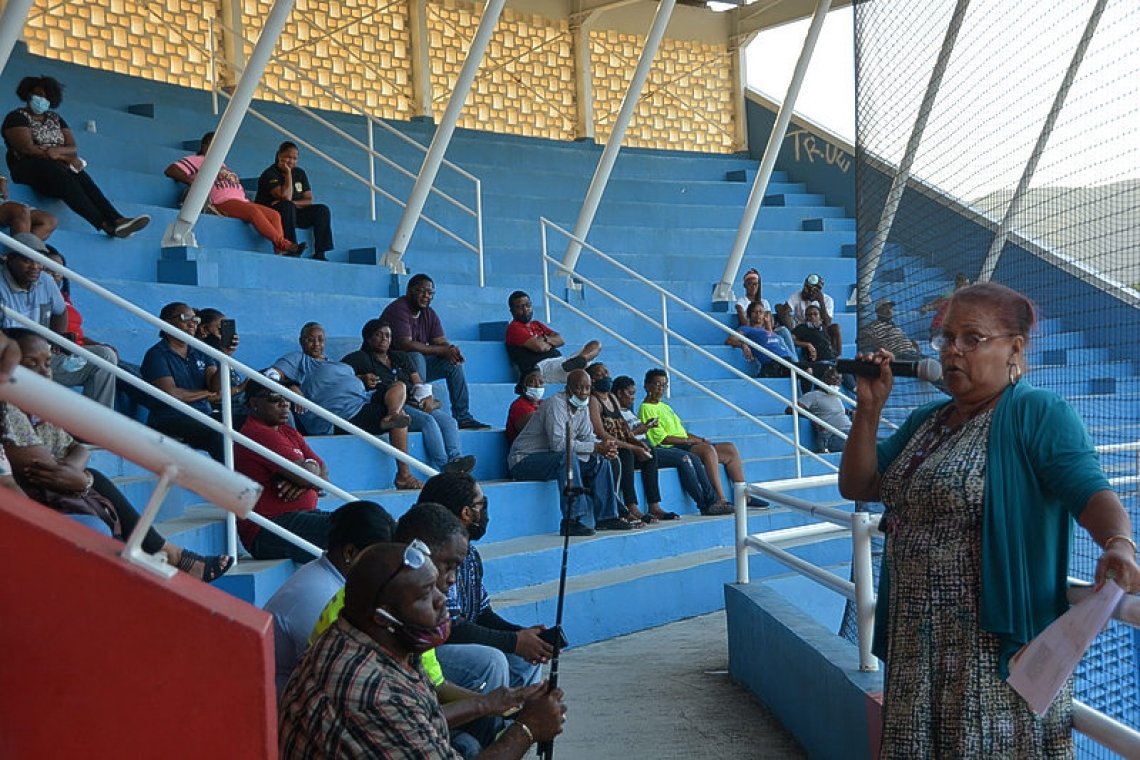 The Unified Labour Unions gathered at the Little League Stadium once again on Friday to discuss and finally accept Government’s proposal regarding their vacation allowance for 2020 and the years to follow. In photo: Windward Islands Chamber of Labour Unions president Claire Elshot speaks to representatives of the unified unions during Thursday’s meeting. Story on page .

PHILIPSBURG–The Unified Labour Unions gathered at the Little League Stadium once again on Friday to discuss and decide on their vacation allowance for 2020 and the years to follow.

After standing firm at the entrance of the Government Building on Thursday, May 28, leaders and representatives were invited by the Council of Ministers to a meeting.

During the meeting at the stadium, the labour unions shared with their members some of the proposals that had been presented by the Council of Ministers.

Windward Islands Chamber of Labour Unions (WICLU) President Claire Elshot read from a summary provided to the unions from their meeting held on Thursday. The document read, “In addition to the overview of cost-cutting measures in the personnel cost, several points were also agreed upon.”

One of these points includes accelerating the placement process of police officers. She said Minister of Justice Anna Richardson had confirmed in that meeting that the ministry is working on the processes, but the timeline allotted has been a problem.

“The counter-proposal that was mentioned in the letter dated May 14 will be further reviewed to determine whether the proposals are feasible and realistic for the future. The Council of Ministers is open for future discussion on these matters,” read another proposal in the summary.

Elshot said in addressing the member audience, “It means that a number of discussions and negotiations will continue to take place with the unions on the legal position of the workers and also on your benefit.”

These payments will take place until the total amount of the vacation allowance which [will not be – Ed.] paid in 2020 and 2021 is fully compensated. The amount of the annual compensation is subject to the future financial development and liquidity position of government.

This proposal was put forth for the members to vote on whether they were in agreement with it or not.

According to the unions, it was imperative that the proposal was decided on that evening, as they had been informed that if there was no agreement received from the unions a final decision would be taken by the Prime Minister.

As this decision would affect civil servants within the representing unions, only members who were civil servants could place a vote towards the motion.

After much back and forth with the audience members who liberally shared their opinions and views on the proposal, by voting time a total of three motions were presented to be voted on.

The third motion was a full payment of all vacation allowance for 2020 and further discussions moving forward for the year 2021.

All motions were shared by union leaders and representatives who in turn asked the member audience to cast their votes with a show of hands on which motion they were in favour of. The first motion ultimately received the majority vote.

With this motion, in addition to what was proposed by government, a member of the audience suggested that with the acceptance of that proposal, union representatives would ensure that the Council of Ministers will issue a formal written agreement with set dates on the documents presented.

The agreed-on motion will be presented to the Council of Ministers by Monday, June 1.