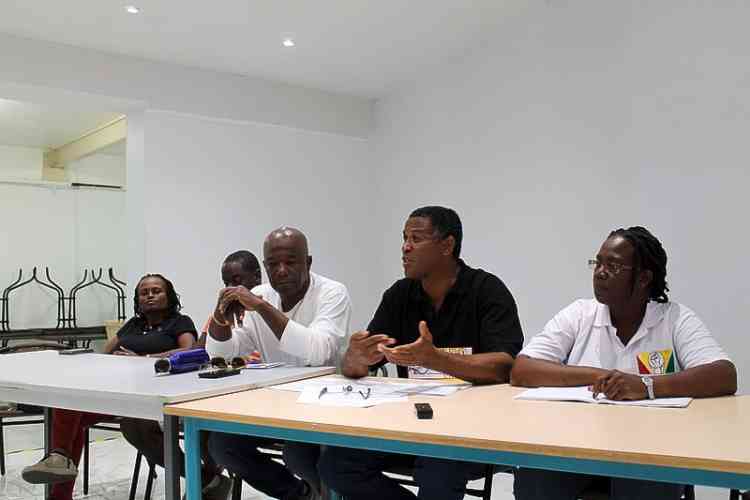 MARIGOT–Representatives of two unions and the collective Soualiga United held a press conference in Fantastic Hotel, Concordia, on Wednesday to reiterate the main reasons for calling the general strike on the French side today. A gathering on the Marigot waterfront of the population supporting the strike is expected from 6:00am.

The general strike has been called not only in support of still unresolved issues pertaining to the two-month-old Caisse Territorial des Oeuvres Scolaires (CTOS) strike, but also to address many other “injustices” in different domains in St. Martin, the representatives told reporters.

“We decided a few months ago that it is time to act against the many injustices going on in St. Martin,” said Mussington. “We have seen since the passing of Hurricane Irma how the French State in collaboration with the Collectivité have imposed a re-organisation of St. Martin without taking into account the cultural, historical and economic reality of the country. These policies have created many injustices against St. Martiners.

“We have seen how union leaders were summoned to court and threatened with charges, an act of intimidation by the Collectivité.

“In the face of all these injustices we are uniting to make the population aware of what is going on and the absolute necessity to fight for justice. We want a project for St. Martin for all, and which is respected.”

Paines explained grievances from other unions have not only been addressed to President of the Collectivité, but also to the Préfète, the head of postal services, and several other departments.

Mussington also drew attention to the situation at the Bethany Home for senior citizens where 20 out of the 40 bedrooms there have been condemned, meaning accommodation for those seniors affected has to be found and where a re-location to Guadeloupe has been suggested, or to the Dutch side.

“These seniors have worked all their lives to make St. Martin what it is today. The families don’t know what is going to happen to them, or to the workers of the home. This is of great concern to us. Our seniors deserve much better than this,” Mussington said.

Louisy from SPEG said regarding the schools that certain establishments have been repaired since Irma but, according to her, never underwent a control inspection by the Collectivité. She also cited problems obtaining teachers.

“Today there are classrooms that cannot be used because they don’t have a door, some don’t have electricity,” she said. “Some of new prefabricated classrooms have leaking air conditioners. Parents have been waiting a year for these repair works to be completed. Today students don’t have the normal conditions to work in.

“There are not enough computers and a lack of Internet at home. About 60 per cent of Sandy Ground doesn’t have Internet and French Quarter is the same. It’s unacceptable that companies have been paid [by the population – Ed.] to do the repair work in the schools and the Collectivité doesn’t inspect the work.”

It was understood the Union des Parents d’ Eleves de St. Martin (UPESM) has given its support to the strike today.

Javois said six points from the CTOS grievance list had been accepted and signed off on March 20 and four others still have to be renegotiated. Point one, the reintegration of 16 CTOS employees whose contracts were terminated, is still unresolved.

Asked to give an indication of what could be expected today, given concerns raised on both sides of the island of the negative image that could be portrayed, the question was not answered directly.

“We will be doing what is necessary to defend the rights of workers, to demand respect for our people, and to make sure there is a St. Martin for all, not for a few. We will make sure that it is either justice for all or justice for no one,” Mussington concluded.