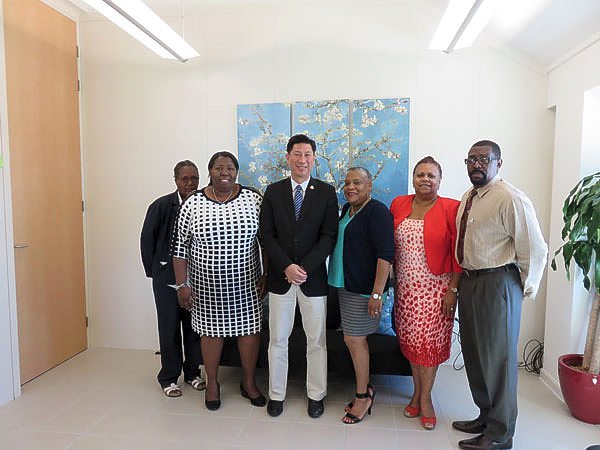 PHILIPSBURG–The Windward Island Chamber of Labour Unions (WICLU) will be hosting a Labour Day Honouring and Awards Celebration Ceremony on Monday, May 1. This year again, Minister of Public Health and Labour collaborated with the WICLU tri-partite committee to bring out the Spirit of Labour on the island.

The ceremony will take place at 8:00am at the new Government Building, where Robert Rawlins, Marguerite Priest-Simmon and Elvina Guy will be honoured.

Robert Leslie Rawlins was born on Aruba on October 10, 1950, and grew up in Aruba. After his secondary education he wanted to become a Chemical Engineer and began studies in the Netherlands many years ago.

His intention was to eventually work in the vibrant Oil Refinery in Aruba following his studies. But this was not to be. After a short while, Rawlins switched majors and took up studies in Natural Science at the Teachers Training College in Utrecht, the Netherlands. During his college days, he gained experience in the classroom teaching some ten hours weekly and he also gained a teaching degree in mathematics.

His history at MPC began in 1980 and during those years he obtained a Bachelor’s Degree in Law in 1986 from the Universiteit van de Nederlandse Antillen (UNA). On Saturdays in the late ’80s he flew weekly to teach Chemistry to then MAVO School on SABA. He also taught Physics to some Lands Radio Employees in order for them to obtain a Correspondence Course at MBO level from the Leidse Onderwijs Instelling.

He was approached in 1989 by Management from the Tax office in Curaçao to teach “Staatsrecht” to employees from the tax office in St. Maarten for them to become “Aanslag Regelaars.” In 1994 he become a Board member for Windward Island Teachers Union WITU and since 1998 he holds the position as Treasurer for WITU.

Marguerite Priest-Simmon was born on July 13, 1949, on the island of Curaçao. She followed her elementary and secondary education in Curaçao, and migrated to the Netherlands in 1968, where she graduated in 1972 as a Registered Nurse. She is married and has three children. She is also a grandmother.

She worked at the former Sint Rose Hospital from 1976 until 1991. While working she enriched her knowledge by receiving her Nursing Practical Instructor, and a Dialysis Nurse Certificate. She continued to enrich her knowledge by obtaining her Master’s Degree in the Science of Nursing, Middle Managing, and attending Symposiums and conferences abroad. She was the Supervisor of the Medical/Surgical Ward until 2011.

She is also a member of the Nursing Association, and as a pensioner of Meals on Wheels.

In 1979 she became a shop steward of the Windward Islands Federation of Labour (WIFOL). The President was Rene Richardson. This was the first Union at the Hospital.

Being a member of the WIFOL, the shop stewards were educated and followed several trainings locally and abroad on Unionism and Labour Laws.

Elvia Guy was born on October 4, 1949, in Quartier D’ Orleans, St. Martin. She is the first child of Violet E. Matthew and John U. Guy, his only child, but has three siblings.

Guy attended the St. Joseph School on Front Street and was raised on upper Back Street, the same level as the school. At the age of ten Miss Guy went to Curaçao to live with her father and his wife. She lived there from 1960 to 1973, and attended the St. Aloysius School and later went on to the St Joseph Mulo in Pietermaai.

After graduating from Mulo, Miss Guy entered the St. Elisabeth Hospital as a student nurse and completed her nursing courses in 1972 as a registered nurse. A year later she moved to the Netherlands to follow the extra mural health care course at the Sociale Academy Aemstelhorn in Amstelveen, Amsterdam.

Guy returned to Curaçao in April 1977 and shortly after came to St. Maarten where she was employed by Government in July of that year. Miss Guy worked for one year at the Health Department, which was then headed by Dr. de Jong. At that time the department was on Back Street where the Personnel Department was located.

In 1978 when the Government Administration moved from Front Street to Clem Labega Square, Guy was transferred to that building at the “Maatschappelijke Zorg Afdeling” headed by Elaine Gumbs-Vlaun. Guy became a member of the ABVO soon after she was employed. In Curaçao she was also a member of the union. After a year, Guy got more involved with the Union, which was part of the ABVO Bovenwinden. When there was a postulation for a new board she was a candidate for secretary, and held the position as assistant secretary/secretary. Guy worked with the late Edgar Lynch, Arnold Brown, Raphael Christian, Alphonso Cooper and others.

She travelled to Curaçao, Saba and St. Eustatius with some of the other board members of the Windward Islands Civil Servants Union in 1979. Edgar Lynch was the first president of WICSU and the persons mentioned above served as the first board. In 1979 there were also Island Council Elections and Guy was a candidate on the slate of the Windward Islands People’s Movement (WIPM) headed by the late Mervin Scot.

In 1980, Guy became a mother and gradually slowed down from active union participation, but remained a member and was always attentive to union matters through attending workshops, seminars and meetings.