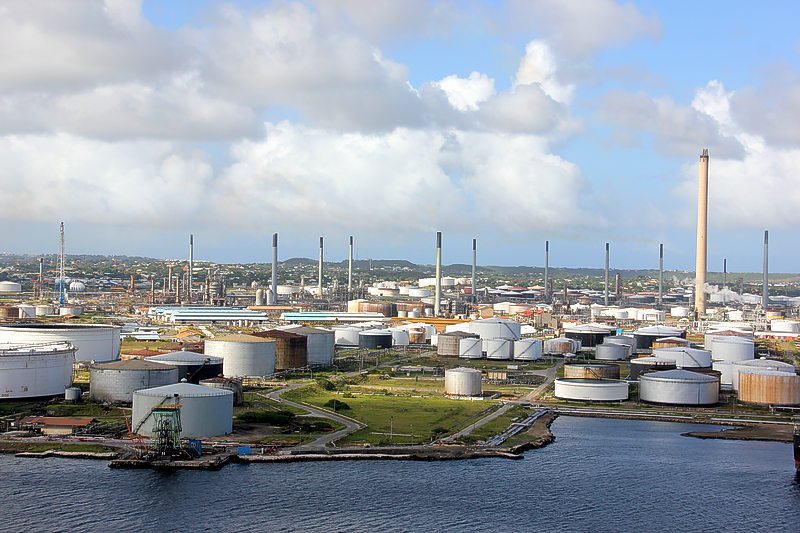 WILLEMSTAD–Unions backing the strike among employees of contractors working at Curaçao’s Isla oil refinery represented by SGTK will start preparing for a general strike today, Tuesday, after talks with contractors’ association AAV, Ministers Ruthmilda Larmonie-Cecilia of Labour and Nelson Navarro of Justice plus mediator Randolph Gijsbertha again broke down.

Monday’s last-ditch effort to prevent an escalation of the conflict failed to produce a solution and the local unions decided to mobilise via their centrals SSK and CGTC, together with the non-affiliated unions. AAV maintained there was no room for further compromise.

The union leaders and shop stewards were all to meet at SSK this morning to plan their strategies and industrial actions. However, a fire broke out Monday evening at the dilapidated, long-closed national theatre “Sentro Pro Arte” next to the SSK building, sparking speculation that protestors had committed arson.

The blaze was huge and caused several explosions as parts of the roof and walls caved in. There was also much concern about the heavy smoke due to the possible presence of old asbestos-containing materials.

Fire fighters arrived but could do little because the fire hydrant there was not working. Water trucks were brought in, but the flames were so intense that it appeared most of the complex slated for renovation would be lost.

The news sent shockwaves and spread fear throughout the community. People on the scene were said to be looking for an alleged drug addict referred to as “Michael Jackson” who reportedly lived in the empty structure.

Earlier, the Petroleum Workers Federation Curaçao (PWFC) representing Isla’s own personnel had spoken to the refinery’s management, which indicated they might be able to accelerate certain payments early to give the contractors financial space. Nevertheless, AAV insisted it could not commit to any more than already offered. Government then said it would come up with a proposal, but was unable to finalise such.

Negotiations over the weekend had not led to an end of the SGTK strike that entered its third week on Monday. Those talks were suspended when protesters disrupted the meeting.

According to former “Kamara Sindikal” chairman Errol Cova, who is assisting his brother SGTK president Alcides in the dispute, the AAV representatives did not feel secure anymore. The president of the contractors’ association was escorted by police for his own safety.

Several unions had called their members to union central SKK Monday afternoon to await word there on the latest developments.

Before that, when a deadline set at noon expired, demonstrators had voiced their anger on the nearby Don Martina Boulevard at Nieuwe Haven, where they threw rubbish, including building blocks, on the road obstructing traffic. These were soon removed when police showed up, but firecrackers had been set off.

The latter led to a large number of officers in patrol cars moving in to confront the crowd that had retreated to SSK. However, they later withdrew after union leaders promised to keep their people in check.

The two parties involved in the conflict have actually reached an understanding on a two-year collective labour agreement (CLA) effective 2017 with salary increases of six and three per cent, but SGTK also wants a one-time payment as compensation for the lack of a new CLA during 2015 and 2016. It demanded 3,000 Antillean guilders per person.

However, AAV says its member employers can give only NAf. 500 and attempts to persuade either the refinery leased by “Petróleos de Venezuela” PDVSA or Government via its energy sector companies to chip in with the remaining total amount of NAf. 1.5 million needed to bridge the gap proved fruitless.

Meanwhile, Isla claims it is losing 1,000,000 guilders per day due to the strike affecting the plant’s maintenance and operations. Two suspect fires also occurred in the bushes near different refinery entrances, but were quickly extinguished by fire-fighters.

Lines of motorists preparing for the worst could already be seen at gas stations on the island.