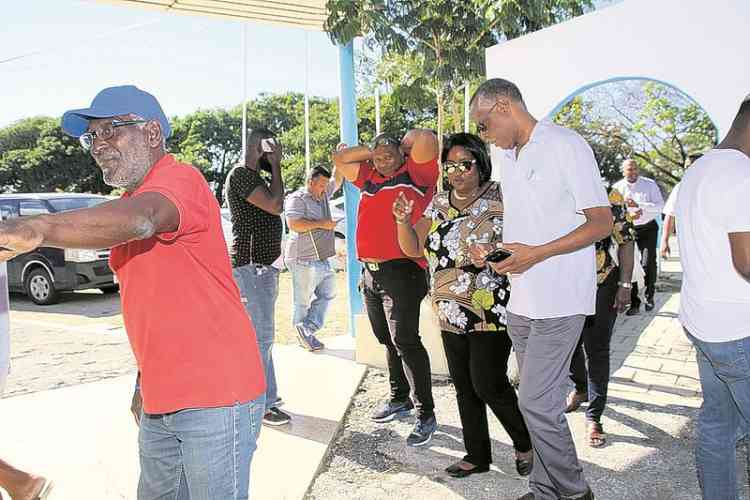 WILLEMSTAD–The public demonstrations by fifteen Curaçao unions are in the interest of more than 60 per cent of the population who must manage to live on a minimum wage, said spokesman Errol Cova. “Many of these people are oppressed and cannot stand up for themselves, we have to fight for them.”

What kind of protests could be expected the action committee chairman of “Solidaridat Sindikal” did not want to say. “A war whose strategy is known in advance is a lost war,” argued Molina.

Government and the group were not able to reach agreements on the minimum wage increase in talks for which the actions had been suspended by two days. The Eugene Rhuggenaath Cabinet already approved a hike of 17.5 Antillean guilder cents per hour effective January 1. Together with the usual cost of living indexation this would bring it from NAf 8.20 to NAf 9.

The unions want more to ultimately achieve a sustenance level. A compromise proposal of 26 cents by mediators Randolph “Dois” Gijsbertha and Yubi Evertsz has been turned down by Social Development, Labour and Wellbeing Minister Hensley Koeiman, saying it was not feasible and would have serious consequences.

One of the other issues, intended mass dismissals at United Telecommunication Services (UTS), is being discussed between the government-owned company and the union representing its employees Sitkom in the presence of Traffic, Transport and Spatial Planning Minister Zita Jesu-Leito. They agreed to have a committee of experts named one each by the Council of Ministers, Sitkom and UTS’ Supervisory Board evaluate the reorganisation trajectory including supporting documents such as the Business Process Redesign Plan and the Social Statute, to make recommendations to all three parties within six weeks.

Management and the union are also to continue their mediation that came out of a court case against plans to reduce personnel from 480 to 200 and complete such by December 20. They will not comment publicly on the negotiations, but once finished the company must inform its staff on a weekly or bi-weekly basis regarding the layoff process.

Meanwhile, a UTS meter cabinet in Koraal Specht caught fire and management suspects arson. Large parts of the district were left without telephone, fax and Internet service, as it will take a few days to replace the damaged equipment.

There was also a fire at the Malpais landfill last weekend that waste processor Selikor said had been lit. The recycling project was affected and will now be delayed, as containers with related materials such as plastic bottles burned out.