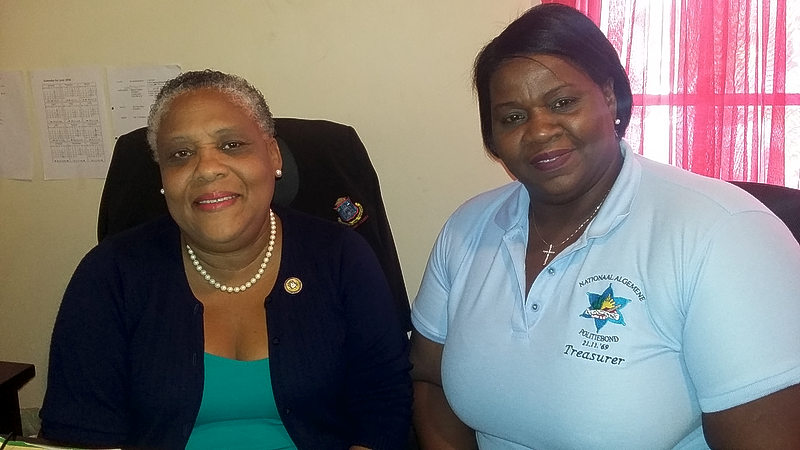 PHILIPSBURG–The unions representing workers at the Pointe Blanche Prison will be meeting with their members working at this facility this Friday to update them on Justice Minister Edson Kirindongo’s response to an ultimatum the union had given him to deal with certain critical issues at the detention facility.

The unions met with the minster twice over the past few days regarding concerns of its members at the prison, since the shooting of an inmate inside the facility on Wednesday, August 31.
Windward Islands Civil Servants Union/Private Sector Union (WICSU/PSU) President Julia Solognier and the Nationale Algemene Politie Bond (NAPB) St. Maarten police union representative Janice Philips told The Daily Herald on Wednesday, that the meetings with the minister had been fruitful and while there is a lack of funds to address certain things, the minister is trying to address some of the concerns that exist. Solognier and Philips were also speaking on behalf of the ABVO union, which was also involved in the process.
On Thursday, September 8, the unions delivered a letter to the minister giving him an ultimatum of Tuesday, September 13, to address three critical issues at the facility: safety, lack of personnel and lack of adequate tools.
The union also urged the minister, in their letter, to address certain issues in the long term including the infrastructure of the prison which is in need of urgent expansion and more cells; the accountability of the current prison director; evaluating the director; putting a competent management team in place with transparency, and involving the unions in the policy making process of the detention facility.
Solognier said the unions are cognizant that the long term goals will take time to achieve. She said, however, that the minister pledged to table these matters in the Council of Ministers meeting and taking whatever steps are needed so that whatever incoming government takes office after elections can continue to follow up on them.
Solognier said following the fatal shooting of the inmate, prison workers had been waiting to hear from prison management on the matter. When the workers did not hear from management, they became on edge and the union was contacted. WICSU/PSU responded by sending a letter to the workers inviting them to a meeting on September 8.
However, the workers felt that this was too long and on September 6, informed the union that they wanted to meet urgently. This led to a meeting with the union where the workers outlined their grievances with the situation at the prison.
The WICSU/PSU then decided to involve the other unions that had members at the prison and met with those unions on Wednesday, September 7. At this meeting WICSU/PSU conveyed the sentiments of the prison workers and the unions together discussed the matter and decided to write an urgent letter to the minister with the ultimatum to address the critical issues.
The unions then called their members to a meeting at the WICSU/PSU office on Thursday, September 8, to update them on the decision taken to give the minister an ultimatum in a letter. The union representatives said the meeting was not a strike or any form of industrial action. At the meeting the unions and workers decided to walk together to the Government Administration Building to deliver the letter and the workers were expected to immediately report back to work.
The letter to the minister led to the unions meeting with Kirindongo’s twice in recent days: on Friday, September 9, at Princess Juliana International Airport SXM as soon as the minister disembarked a flight, and again on Tuesday, September 13, the date of the ultimatum.
The Daily Herald understands also that the minister met with some department heads on the issues of concern on Monday, September 12, a day ahead of meeting with the unions. Both Solognier and Philips said the meeting with the minister had been fruitful.
“He has started to work on certain things. Finance is the biggest problem,” Solognier said. “But, he has started to take steps to handle the concerns of the workers and he agreed to do this with the input of the unions.”
Asked about concerns expressed in the community about the possibilities of the gun that shot the inmate getting into the prison via the prison guards, the union representatives said proof of this is needed before such a conclusion can be formed.
It was also noted that there are several security concerns at the prison. These include the prison scanner that has not been working for several months now, and the fact that some inmates, who are nearing their release dates, get to work in the prison kitchen for example, are the ones authorized to check incoming deliveries to the kitchen.
Philips said during the meeting with its members on Thursday, the unions emphasized to the workers that they also need to assume their responsibilities when it comes to their work. The workers were also given tips on how to effectively carry out their duties.
Both unions also said that they do not condone suspicious, long term sick leave. They both stated that if many workers are out on sick leave this puts tremendous pressure on the few workers who do show up for work and have to put in extra hours to help secure the facility.
The unions thanked the minister and his cabinet for accepting their letter and for meeting the unions’ deadline on short notice.