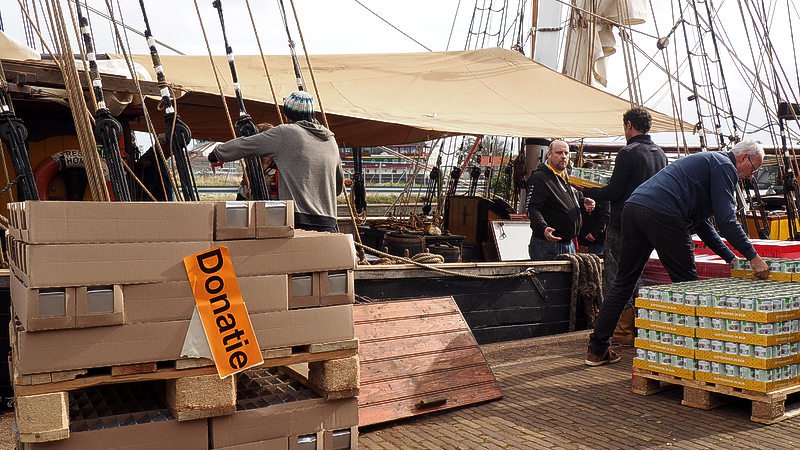 DEN HELDER–A very special ship is on its way to St. Maarten with twenty tons of relief goods for an important, but often forgotten group: the animals in need.

The Tres Hombres, an engineless sailing cargo ship of the emission-free shipping company Fairtransport, left the Netherlands 10 days ago and should arrive about a month afterwards with food for homeless pets and livestock, and other much needed items.
The relief goods were donated by the Dutch animal welfare organisation Animal in Need and its Second Chance Foundation, which traditionally focuses on the wellbeing of stray animals in Spain. The organisation decided to spring into action for the animals in St. Maarten, including those that are held at the various shelters due to the destruction of Hurricane Irma.
The 20 tons animal food and some other items, including trap cages to catch loose cats and dogs, will be distributed by Animal Defenders of St. Maarten and SXM Paws, other local animal welfare initiatives, shelters and veterinarians.
“We had space available on our next sailing to the Caribbean on Tres Hombres and we considered this to be such a great initiative of Animals in Need and Second Chance that we immediately decided to support it. We found it a beautiful theme. Naturally, the first attention after a disaster goes to human beings, but animals and their wellbeing are also important. We stand for improving welfare in the world,” said Saskia Poelman of Fairtransport.
Fairtransport sails between Europe and the Caribbean twice a year, taking organically-produced goods such as olive oil from Portugal and wine from France to the Caribbean, and taking back organic rum from the various islands, cacao from the Dominican Republic and coffee from Colombia to Europe.
The 32-metre restored wooden brigantine Tres Hombres, built in 1943, left the port of Den Helder on October 1, and after a stopover in the Canary Islands will sail directly to St. Maarten, which will take about a month because the ship uses the wind as its only source of energy and is completely dependent on the trade winds. Solar energy is also generated on this 100 per cent emission-free ship.
On board are a crew of seven and eight passengers/trainees. In total, the ship carries a load of 35 tons, including the 20 tons of animal relief goods for St. Maarten. The other 15 tons mostly consist of gin and wine which will be brought to other Caribbean islands.
Besides transporting organic, traditionally crafted products, Fairtransport aims to raise awareness about the huge amounts of pollution created by the modern shipping industry and affect positive change in the way goods are shipped around the world. The company also has one other engineless sailing cargo ship, the Nordlys, which sails the European coastal waters.
Animal Defenders has taken on the immense task since the hurricane to feed the very large number of pets that have lost their homes in St. Maarten, in addition to the already large number of stray animals on the island that were already cared for by the volunteers of the organisation for years. Then there are also countless cats and dogs whose owners departed after the hurricane and left their pets to fend for themselves, or counting on a friendly neighbour for care.
Animals Defenders is in need of a lot of food to feed the animals, which are in great need, especially in the poorer districts. The organisation has already received a much-needed and appreciated donation from a friend of the organisation in the Netherlands and the Rescue Paws Curaçao. These goods were transported to St. Maarten on one of the Sea Shepherd ships and were brought to the animals in need last weekend. Long-term assistance to feed the animals is essential.