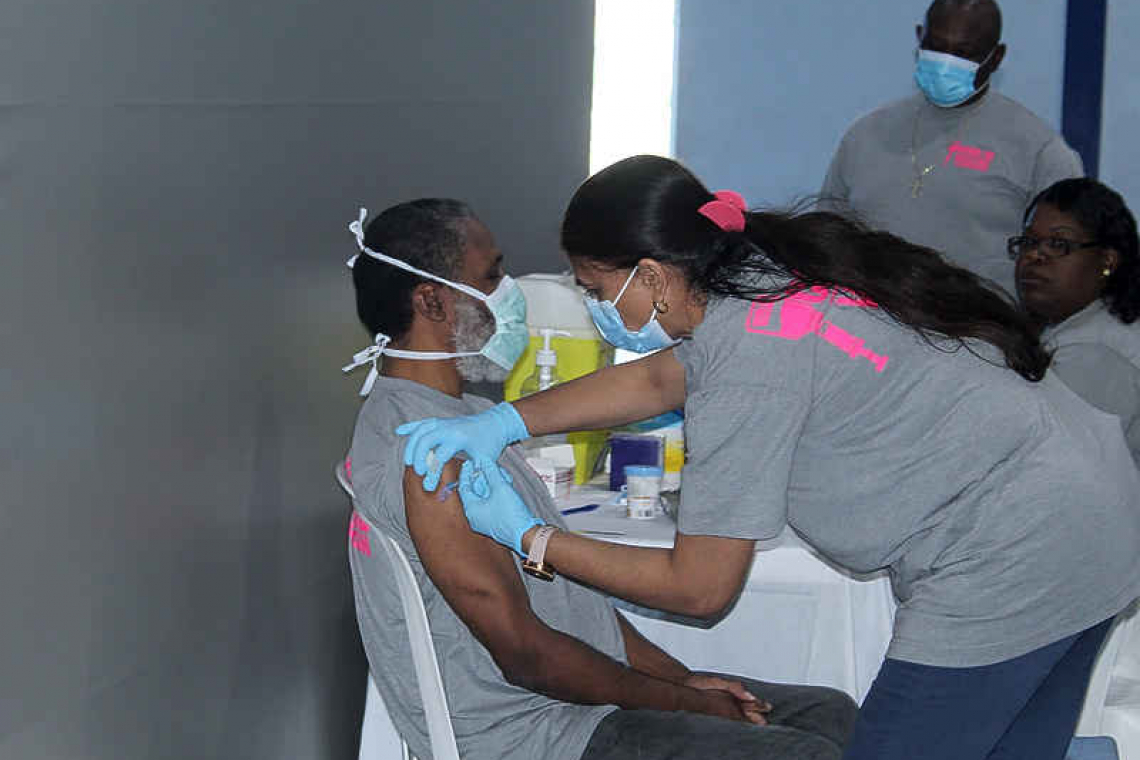 ST. EUSTATIUS–Health officials came out in force Monday for the kick-off of the vaccination programme in St. Eustatius at Earl N. Merkman Sports Hall, where health officials were out in force. Health Department unit manager Dr. Gerwin Schobbe was the first to receive the Moderna vaccine, administered by Dr. Sharda Baboe. The vaccination drive will run February 22-26.

The first vaccinations were broadcast live on GIS. Security officers guard the location where the vaccines are stored and the vaccination site. A nurse monitored persons who received the vaccine in an observation area. Residents received notification about the day and time of their first and second dose of the vaccine. A total of 118 persons were vaccinated on Monday.

Alvin Courtar Sr. (87) was the first senior vaccinated with the Moderna COVID-19 vaccine.

“It is about 10 minutes now since I took the vaccination and I’m feeling fine. No reaction, no pain in this arm, it’s just like another day,” said Schobbe after he received the vaccine.

He said the Moderna vaccine that has been made available to Statia by the Ministry of Public Health, Welfare and Sport VWS has a “very good” track record. “We know that the vaccine seems to work against the variants that are going around right now, such as the South African, English and the Brazilian variant.”

Deputy Government Commissioner Alida Francis was the first woman to take the vaccine. She also did not feel any pain during the vaccination. “New mutations are known to spread the virus faster, so it is in everyone’s interest to vaccinate,” Francis said.

She said she knows that people still have a lot of questions about the vaccine, but encouraged everyone to put their trust in science. “The hope is that the vaccinations will allow Statia to reopen so that visitors can return to the island to stimulate the economy and residents are able to travel.”

Francis said she used the opportunity to be 95-per-cent protected against COVID-19. “I am taking responsibility to protect myself and others I will come into contact with,” she said.

Government Commissioner Marnix van Rij and his wife were the next persons to take the vaccine. Van Rij said he had no side-effects. “We are all very privileged that we have received the vaccines. There are only 200 million vaccines administered so far in a world population of eight billion.”

He said Statia is prepared for the situation in which more than 800 persons sign up for the vaccine. The VWS ministry promised a second shipment if that were to happen. It is the goal to have 2,000 persons register to take the vaccine, which would account for 80 per cent of the population 18 years and older. “The more people are vaccinated, the higher the chance that the island can return to normal life,” Van Rij said.

Alvin Courtar Sr. (87) was the first senior to take the COVID-19 vaccine. He said he had come out to get the vaccine because it benefits his health. He had no ill effects from the vaccine and encouraged Statia residents to come out and take the vaccine.

“Statia has the lowest number of registered persons for the vaccine, even less than Saba, which has a smaller population,” he stated. Courtar said there is a lot of ignorance on the island and encouraged everyone to go out and take the vaccine. He commended the island government for the “very good job” it has done during the pandemic.