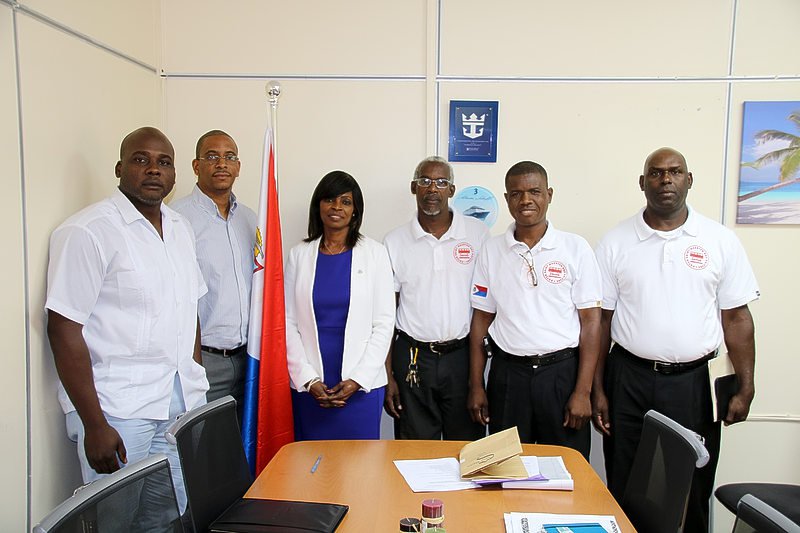 Servicing the Sucker Garden to Middle Region route came up during the discussions and the Association presented its solution to eradicate gypsy drivers presently charging patrons living in the areas. The group proposed that all 7-seat buses be diverted to service the route. This will give residents living in the area the chance to finally use proper and safe public transportation.

Association President Omeus Claude said in an invited comment that the meeting had been fruitful and the Minister had been very receptive of the Association’s plans for its transportation sector. The meeting also focused on Dutch bus drivers using the French-side routes, Back Street road repair updates and the much-needed bus terminal routing system.

The Association was given two weeks to find a location in Philipsburg that will be suitable to house the terminal. The group proposed the current taxi stall in front of the Government Administration Building, but the Minister told them this already was used by the Taxi Association.

Claude also mentioned that the board planned to introduce certification that will be mandatory for all Dutch-side bus drivers. A meeting is set for this week with University of St. Martin (USM) to create a programme for drivers to follow. The certification will include proper dress code, knowledge of St. Maarten’s history and knowledge of approved routes.

Presently only 10 bus drivers allowed to use the French-side route. The Association said the Minister would allow 20 more permit changes in consultation with the board.

Bus drivers are encouraged to sign up with the Association, as several benefits can be utilised by the drivers such as a discount card and medical insurance for them and their families.

Claude also called on the public to use the bus stops on the road when stopping the buses. Unnecessary traffic congestion is created when operators stop at an unapproved bus stop.