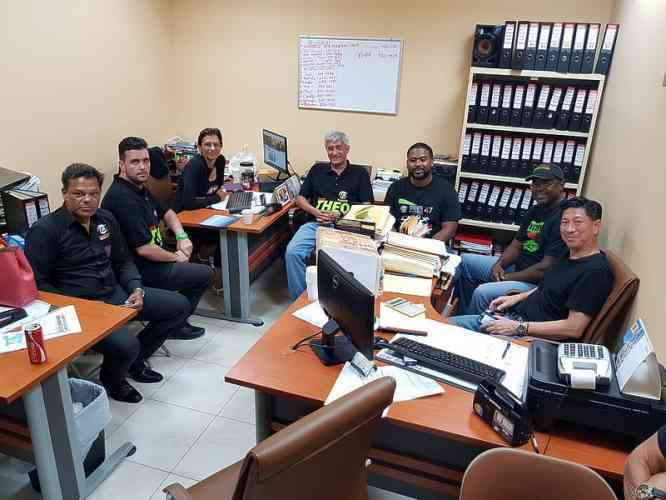 PHILIPSBURG–St. Maarten will have a coalition government again after all parties failed to secure a full majority of eight seats in Parliament. United Democrats, a merger of United People’s (UP) party and Democratic Party (DP), came close with seven seats, one short of governing by itself.

National Alliance (NA) maintained its five seats in Parliament while United St. Maarten Party (US Party) lost one of the three seats it earned in the 2016 snap election.
St. Maarten Christian Party (SMCP) will be a new party in Parliament, earning its first-ever seat. This was the party’s second election. It fell short of earning enough votes in the last election.
The seat allocation presents the country with several possibilities for a coalition government. Talks among parties were said to have started after the results were delivered by Central Voting Bureau Chairman Jason Rogers after 2:00am today, Tuesday.
No coalition had yet emerged at press time.
Overall, United Democrats earned 5,749 votes across the 20 polling stations, NA 4,139, SMCP 1,181 and US Party 1,788.
The combined votes the two parties making up United Democrats earned in 2016 were 5,943. The party can be said to have lost 194 votes, but as a combined party it maintained the seven seats earned in the last snap election – UP had five and DP two.
NA captured 361 votes more than it did in 2016.
US Party lost a whopping 996 votes since the last election.
SMCP gained 333 votes more than it did last time.
Total ballots cast were 13,932. This means 650 people fewer voted than in 2016 when the total was 14,596.
Of all ballots cast, 13,553 were valid, 98 were blanks and 303 were invalid.
The results of the election are preliminary until the Central Voting Bureau has a public sitting in Parliament House on Monday, March 5.
The vote tally has produced four first-time Members of Parliament – Luc Mercelina (United Democrats), Egbert Jurendy Doran (NA), Rolando Brison (US Party) and Wycliffe Smith (SMCP).
Currently serving MPs who retained their seats are Theo Heyliger, Sarah Wescot-Williams, Franklin Meyers, Sidharth “Cookie” Bijlani and Chanel Brownbill (United Democrats), Ardwell Irion (NA) and Frans Richardson (US Party).
Previously-elected MPs who are not currently serving in the legislature, but have recaptured a seat, are Public Health Minister Emil Lee (United Democrats) and former Ministers Silveria Jacobs, Christophe Emmanuel and William Marlin (NA).
Not re-elected are Tamara Leonard and Claret Connor who were elected with UP and Perry Geerlings (DP), George Pantophlet, Hyacinth Richardson, Rodolphe Samuel and Romeo Pantophlet (NA).
The MPs come April when the new Parliament is sworn in may reflect different faces than those elected on Monday. This change will depend on coalition formation and MPs-elect possibly opting to become Ministers, thus making way for the next highest vote-getter on their parties’ slates to become lawmakers.
The two other parties in the race for Parliament – St. Maarten Development Movement (SDM) and People’s Progressive Alliance (PPA) – both failed to capture a seat.
SDM of Benjamin Ortega got 416 votes. The party had count of 346 in 2016.
PPA, headed by former Parliament chairwoman Gracita Arrindell, received 280 votes. The orange party had 234 votes in the last election.
The usual Election Day festivities were subdued due to residents, voters and non-voters alike, still struggling to recover from the ravages of Hurricane Irma, a category five-plus monster that slammed into the island on September 6, 2017.
St. Maarten headed back to the polls due to a shift in Parliament that occurred in late October 2017 when three parliamentarians pulled their support from the then-NA-led Government with primary reasons voiced as the refusal of then-Prime Minister William Marlin to accept Dutch conditions for recovery aid and the overall handling of the Irma crisis.
Marlin responded to the loss of majority support in Parliament with a decree, signed by Governor Eugene Holiday, to dissolve Parliament and hold a new election.
There was a general outcry from many sectors of the community against an election at this time, but the election moved ahead.

Turnout
The voter turnout of 62 per cent for the second snap election in 17 months was the lowest in recent history. The 2016 election had a turnout of 65 per cent, 2014 had 69 per cent and 2010 had 71 per cent, a consistent downward trend.