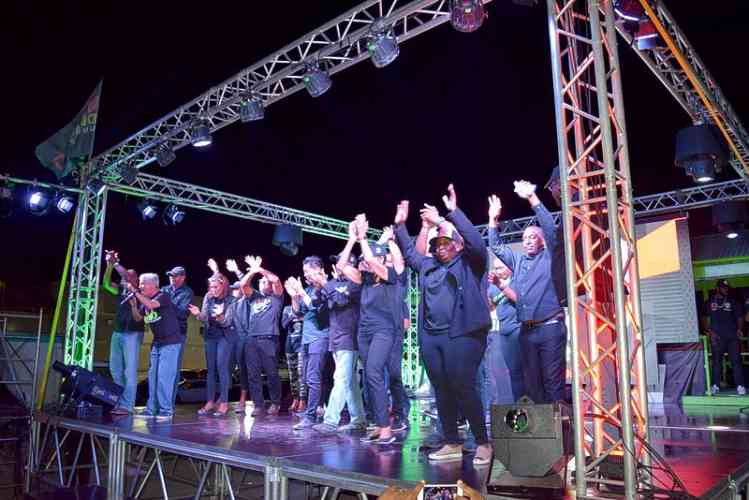 PHILIPSBURG–United Democrats means “stability in government” and the proven ability to move projects from “paper to reality” was the platform United Democrats candidates expounded at the party’s final rally of the election campaign on the ring road Saturday night.

All candidates called for voters to give the party the full mandate of eight or more seats in Parliament to truly bring stability to the country.

Party leader Member of Parliament Theo Heyliger told supporters who braved the rain or sheltered under umbrellas when the rains came that the focus of the party is real progress and stability for the country after years of shaky coalitions.

The merger of his United People’s (UP) party and MP Sarah Wescot-Williams’ Democratic Party into United Democrats has as its foundation stability and the drive to rebuild the country, Heyliger said.

He, the party’s #2 candidate Wescot-Williams and #3 Franklin Meyers said they and the other 20 candidates on the slate for today’s snap election have worked to build and push the country forward.

“We will do what needs to be done for the people of St. Maarten,” said Heyliger, the party’s #1 candidate. Highlighting the party’s ability to get projects going, he said affordable housing is a top priority and once the party’s representatives continue in office, a massive housing project encompassing some 100,000 square metres of land will start soon.

That project will be in addition to the long-awaited start of construction of houses on the Vorst property in Cay Hill, land bought by Government some three years ago when the party’s #23 candidate Maurice Lake was Public Housing Minister. The land was given to the General Pension Fund APS to develop.

Removing all taxation from seniors is a goal Heyliger said he intends to champion when returned to Parliament and Government.

The need to rebuild St. Maarten for the people is paramount, he said, calling on voters to remember the chaos the country was in under the former National Alliance (NA)-led government following Hurricane Irma.

That party, he said, needs to be asked about the Pearl of China project it had promised about two years ago and the “Plan B” former NA leader William Marlin had when he snubbed the Dutch Government’s assistance at a time the country was in dire need.

Wescot-Williams said the “biggest nightmare” for NA came on December 22 when United Democrats was formed as a political party. It, like the parties from which it emerged, represents the Dutch side and French side equally and is embracing to everyone, she said.

Her record of standing up for people speaks for itself, Wescot-Williams said, noting that she always brings “class and representation” for St. Maarten.

Looking ahead to today’s elections, she told supporters: “Together, we can make it happen.”

Meyers said the election had not been wanted by the people, but was forced on them by the NA after it lost majority support in Parliament in October 2018. He urged voters to not forget that Marlin “called elections on the people at our worse time” – after Irma.

He also placed with Marlin responsibility for the blocking of the border with the French side, a move that separated not only families but the people of St. Maarten.