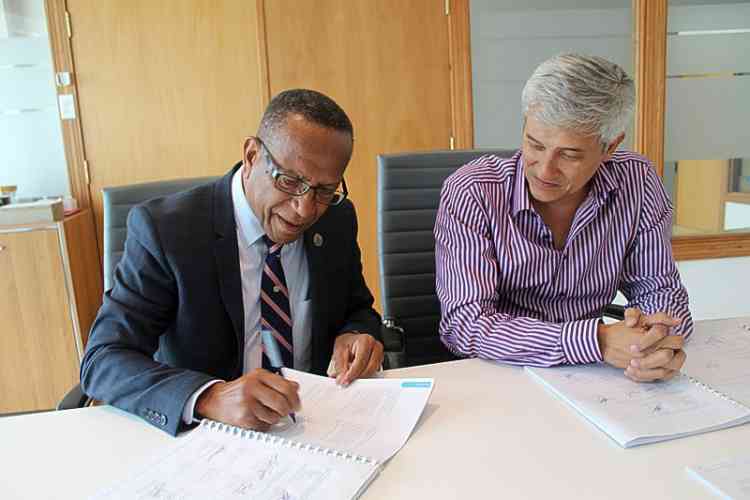 PHILIPSBURG–Almost three months after the formation of the United Democrats/St. Maarten Christian Party (SMCP) coalition, the two party leaders have signed the “Building a Sustainable St. Maarten” governing programme that will serve as a roadmap for the Leona Romeo-Marlin Cabinet II set to take office on Monday.

United Democrats leader Member of Parliament (MP) Theo Heyliger and SMCP leader MP Wycliffe Smith signed the document on Friday afternoon, ahead of Heyliger, as formateur, presenting his final report on the new cabinet and the programme to Governor Eugene Holiday.

The eight MPs supporting the “St. Maarten United Christian Democratic Coalition” and the nine incoming members of the Romeo-Marlin Cabinet II have also affixed their signatures to the programme that covers the 2018-2020 parliamentary term, according to a press statement from Heyliger.

This governing programme and the National Recovery and Resilience Plan (NRRP) will serve as the roadmap for the incoming Council of Ministers.

Priorities for the incoming cabinet include repairing of roofs and boosting the economy, according to the press statement. Critical to achieving the latter goal is the reconstruction of Princess Juliana International Airport and hotels damaged by Hurricanes Irma and Maria. Focus will also be on a final clean-up campaign and the preparations for the in-progress 2018 hurricane season.