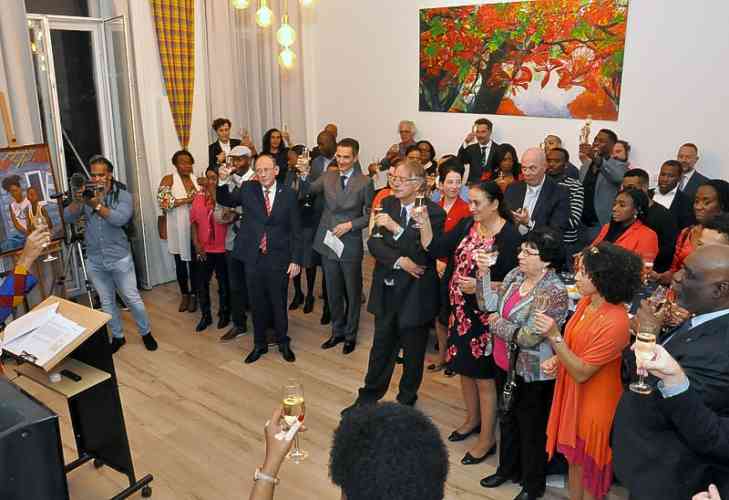 THE HAGUE–Words of commitment and cooperation to restore St. Maarten to its former glory and the message of unity sounded at the St. Maarten Day celebration at the Cabinet of the Minister Plenipotentiary of St. Maarten in The Hague on Friday evening.

This year’s theme “Resilience is our trademark” describes St. Maarten and its people; the resilience to bounce back, to continue working for a better island, said Minister Plenipotentiary Jorien Wuite in her address to the 65 invited guests, including representatives of the governments of the Netherlands, Aruba, Curaçao and the Council of State, the French ambassador and representatives of international organisations.

Wuite said there were yet many hurdles to be taken. “As the saying goes, Rome was not built in a day, so St. Maarten cannot be at its best within a year. The process is long, but with patience, hard work and good faith we will get there together.”

She remarked that this called for unity and the willingness to work side-by-side. “The ability to have constructive dialogue in an open and transparent manner by all stakeholders is now needed more than ever. We all have a part to play in making this a reality.”

On the 55th anniversary of the joint celebration of the Northern and Southern parts of the island and the 370 years of friendship between the two parts of the island, Wuite felt honoured that French ambassador to the Netherlands Philip Lalliot was present at Friday’s event at her cabinet.

“We not only share one island, we have a shared destiny, which is to make St. Maarten/Saint Martin strong again. We are in the recovery process together. Recovery is for both sides of the island,” said Wuite.

Ambassador Lalliot agreed, using the words of French President Macron: “Both sides of the island must move forward together.” Lalliot called for intensification of the cooperation to accelerate economic recovery.

Paying tribute to the victims of Hurricane Irma, he said his government was there with them to rebuild what had been destroyed. “President Macron was on the island late September to meet the people and to see how reconstruction was going. We know how difficult it is to recover from such an unprecedented disaster. We are well aware of the suffering, the frustrations and expectations. We know whatever the efforts, results never come fast enough.”

Lalliot recognised that even though St. Martin, through a huge collective mobilisation, had succeeded in ensuring the return of public services such as roads, water, electricity, telephone and public health, some things were “not going fast enough.” He said that was especially true for housing and schools. “A lot has been done already, but a lot remains to be done in the coming months. We have to do more and faster.”

He said the ambition to rebuild better, working on a sustainable economic development model that takes the island’s fragilities into account should be one for the entire island, implemented through renewed cooperation. He mentioned the cooperation agreement that was signed in Paris in June 2018 in areas like reconstruction, security, public health and the fight against illegal immigration.

Van der Stelt said it was important to cherish traditions, pay tribute to heritage and know one’s roots. “The strong bond of the two sides is used as a driving force to overcome the disaster of Hurricane Irma together. You need that basis of friendship to get further.”

Curaçao’s Minister Plenipotentiary Anthony Begina also spoke of the importance of unity, especially in hard times. “If you want to be strong, you have to stick together and think big,” he said.

Aruba’s Deputy Minister Plenipotentiary Eddy Paris told the audience he had a special bond with St. Maarten, as his parents had lived on the island for a few years.

During Friday’s event, a silent auction was held for two paintings, one by Roland Richardson and the other by Tes Verheij, with the proceeds going to a good cause. Anastacia Larmonie and Quinsel Adolphin were in charge of the music Friday evening.

The Cabinet of the Minister Plenipotentiary was not able to celebrate St. Maarten Day in the Netherlands last year so soon after Hurricane Irma struck the island. “This year we can and we are celebrating. We celebrate our resilience, our unity, our friendship and our strength,” said Wuite.

A special, separate event took place in The Hague on Friday afternoon, organised by the Cabinet and BuZBEE Events of Adrien Busby. Close to 40 people participated in a flash mob in The Hague’s city centre, dancing the ponum to the rhythm of a drum, showing their freestyle moves and displaying the national flags.

Passers-by were pleasantly surprised and many stood still to observe. Bystanders received a goodie bag from the St. Maarten Tourist Office in the Netherlands, encouraging them to come to the island on vacation.