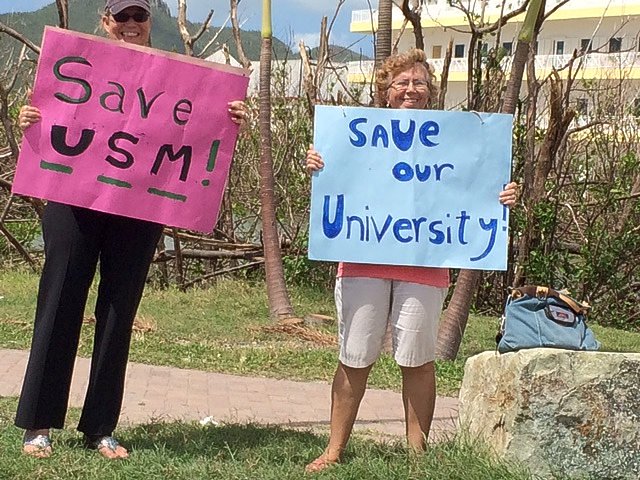 POND ISLAND–University of St. Martin (USM) has confirmed that it will be ceasing its operations at the end of this month.
The closure is due to compounded financial constraints following the passage of Hurricane Irma on September 6. USM had asked government to increase it subsidy to NAf. 3 million to remain afloat, but Education Minister Silveria Jacobs has said this is not possible. USM’s confirmation of its closure comes on the heels of government’s approval to grant the institution the 10 per cent of its subsidy funds for 2013 and 2014, that was withheld until financial reporting obligations were lived up to.
President of USM’s board Valerie Giterson-Pantophlet said notwithstanding a petition signed by well over 3,000 supporters of USM, the institution has yet to receive a positive reply from the Ministry of Education on its request for a subsidy increase. “Given this fact, the institute is forced to cease its activities within one week,” Giterson-Pantophlet said.
USM is exploring two options that will not leave its student population stranded. The first is the transfer of students to Tulane University in New Orleans where they will be taken care of for one semester at USM rates. The other is to have the UVI take over the operation in St. Maarten. This will guarantee that those students who wish to remain on the island will be able to complete their studies. “Even though USM is forced to close its academic doors as of October 31, the Board is still keeping its door open for further discussions with the Minister of Education and the Government of St Maarten,” it was stated in a press release on Wednesday.
Giterson-Pantophlet said the closing of USM will leave St. Maarten without an institution catering to tertiary education. “This leaves St. Maarten students with no other option than to go abroad to pursue an education that would make them managers, consultants and professionals in the hotels, banks, insurance companies and other businesses of the land. Equally, St. Maarten will be fully dependent on teachers trained abroad. The closing of the USM, founded by Ambassador Husang Ansari and Claude Wathey, is a blow to the people of St. Maarten,” she said.
She said the decision to cease operations was not an easy one to make. USM presidents over the past decade have addressed the institution’s financial challenges to government. “Various Ministers of Education, after St. Maarten achieved its separate status on 10-10-10, have made promises to adequately support the institution. They promised to enact a law of tertiary education as was the case in the Netherlands and other countries within the Kingdom that would secure funding for the USM.”
During a parliament meeting on May 20, USM called for a law on tertiary education and also explained that it needed an increase to NAf. 3 million to adequately run the institution. “Public promises were made, but real funding was never received. Anonymous benefactors have over the years tried to temporarily assist to fulfil demand, but have lost trust to co-finance as government funding and the law of tertiary education is still forthcoming. Supported by the opinion of various financial experts that advise the board and staff, this has become an untenable situation.”
She said the fact that USM was in financial difficulties and needed government support should come as no surprise as the university’s requests for assistance have not only been officially directed to Ministers of Education, but were conveyed to the public as well. Hurricane Irma, she noted, did not cause the demise of the institution. It only exacerbated and accelerated the challenges that the university faced. “The lack of proper funding on an island where most make just above minimum wage created the impression that the USM was an expensive school, while in comparison to other institutions this was definitely not the case.
“Most of the students attending the institution have had to hold a steady job next to their studies. They had delays whenever they fell out of a job or the employer’s time schedule did not jive with that of the USM. Proper government funding would have alleviated this. Today as many of the USM students have lost their jobs or face job uncertainty many are seeking relief or considering cancelling.” She said the Board cannot respond adequately to that plight as it has not received a positive response from government after they sounded the alarm on October 2, 2017.
The Board said it regrets the decision even more as USM has accomplished various successes over the past three years. The USM Board thanked its past and current staff and faculty, St. Martiners including government officials, who have sought to put the matter of the law of tertiary education and guaranteeing the viability of the USM on the public agenda and have it be part of government’s budget.
Giterson-Pantophlet said the Board was humbled by the sympathetic reactions of persons of all walks of life to its press statement sharing the current state of the university. “I hope that the closing of the USM is a wakeup call to everyone that we need the law of tertiary education in place, we need to give our young people who remain on the island a chance to better themselves, and we need to secure the future of our children. We need to create a new civilization. It cannot be business as usual anymore,” she said.