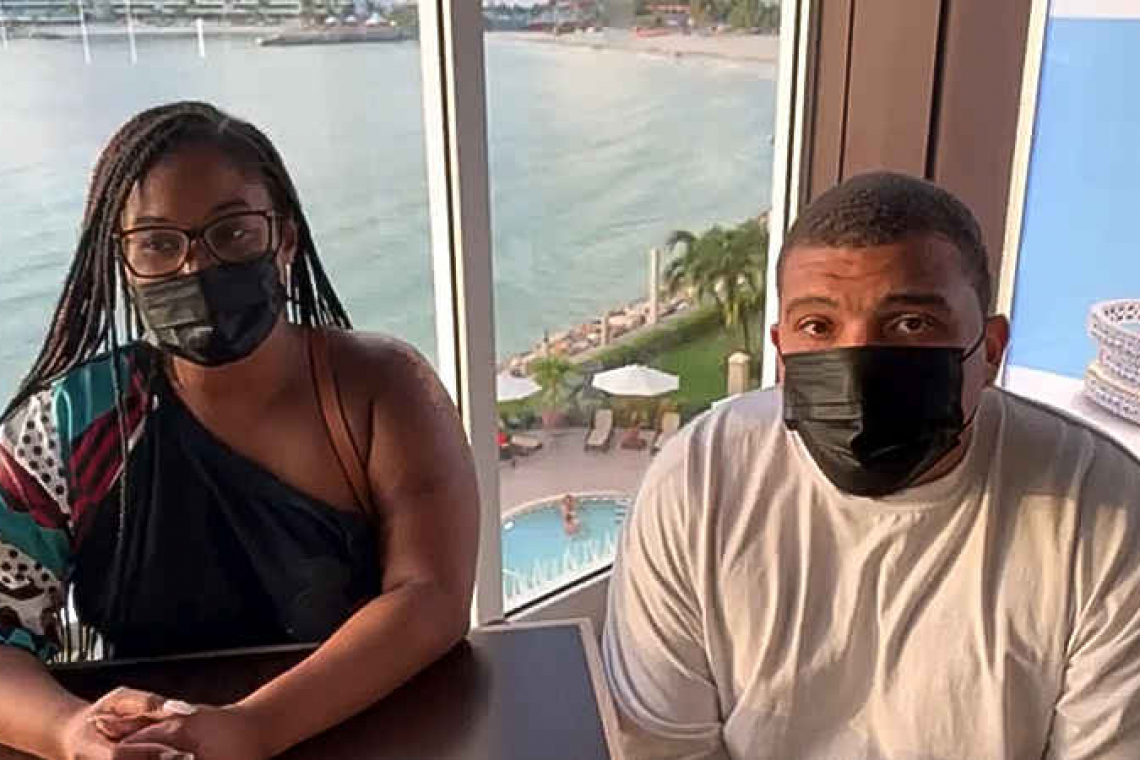 A still image taken from the tourists’ apology video.

PHILIPSBURG–The American tourist couple who were arrested on the night of May 23 for disorderly conduct, destruction of property and assaulting a police officer have been released from jail following an out-of-court settlement with the Prosecutor’s Office.

In the settlement, the couple had to pay a hefty fine and an amount for damages. They also signed an agreement that bans them from returning to the country for three years. The settlement means the couple will not face trial in St. Maarten.

The couple’s lawyer Sjamira Roseburg said on Tuesday that the settlement is voluntary and “does not constitute an admission of guilt.” She also said her clients have already flown back to the United States (US).

Before leaving, the couple apologised to community in a 20-second video released by Roseburg. The couple had previously apologised in a prepared statement.

“We apologise for the chaos we caused in St. Maarten, the beautiful island. We truly did not mean to do any of this, and we are sorry to the police officers for assaulting them,” said the woman.

“It was a terrible mistake, something that got out of hand. We apologise to the police and to the people, for the disrespect,” said the man.

The settlement should not be seen as the tourists escaping punishment, said the Prosecutor’s Office in a press release on Tuesday.

“Rather, this route was chosen by OM SXM [the Prosecutor’s Office – Ed.] to attend to the case as soon as possible, as heading to court in approximately three months would not have been effective.

“Heading to court would have meant that the tourists [could] have left the country without any definite punishment. They would have also been back in the United States, therefore out of the jurisdiction, and would not appear in court when called in the coming months. Allowing such a scenario would have been a disservice to the community, the image of St. Maarten, and might have even created the impression that hurting a police officer [is] easily escaped in St. Maarten. …

“Therefore, instead of allowing the tourists to leave the country with no consequences for their unacceptable actions, the fines, repayment for damages, and the travel condition were imposed by OM SXM. These avenues resulted in the tourists being hit severely in their financial purses and in their travel possibilities,” it was stated in the release.

The now-infamous incident started after the man reportedly forced himself into the kitchen of Topper’s Restaurant and Bar that night, destroying plates and glasses and threatening the workers with a knife. He was said to be heavily intoxicated.

Bystanders captured videos of the arrest on their mobile phones, which circulated widely in the hours after the incident. The videos caused widespread condemnation of the couple’s violent actions.

While the man was visibly resisting arrest and declaring himself to be a “gangster”, his partner was caught on camera kicking a police officer in the groin and stomach.