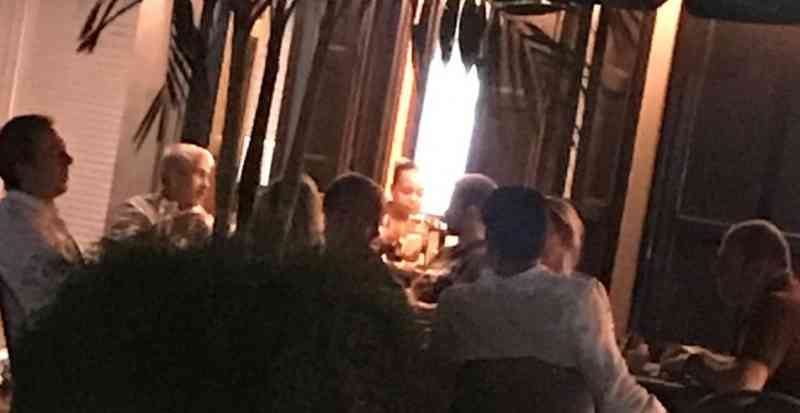 PHILIPSBURG–The Daily Herald has obtained video and photos of Judge of Instruction Johannes Schols, his court recorder, Prosecutor Joris Belien and three officers of the special anti-corruption taskforce TBO having dinner on January 17 after a witness hearing in the high-profile Emerald case earlier that day.

The Judge and the officers of the court had a two-hour dinner and it is “unusual” for a judge to meet with a prosecutor and investigating officers during an ongoing case with which the prosecutor and officers are involved.

Witnesses in the Emerald investigation (see related story) were heard in the Court of First Instance in Philipsburg on January 16, but the location of the hearings had to be changed due to lack of space. On the agreement of all parties involved, the location was changed.
This newspaper reached out to the Joint Court of Justice for comment on the photo late last night and due to the unavailability of its president and representatives in St. Maarten, Vice-President of the Joint Court of Justice for the Curaçao and Bonaire branches Judge Mauritsz de Kort spoke on behalf of the Joint Court.

“This situation was not normal, but we did have discussions about this matter. On January 17, due to lack of space at the Courthouse it was decided by everyone involved to change location of the hearings. Judge Schols and the court recorder after the session went to dinner at Greenhouse.

“Upon their arrival they saw the Prosecutor and three police officers there having dinner and joined them on opposite tables. They did not go into particulars of the Emerald case. They only discussed the continuation of witness hearings. The judge and court recorder paid for their own dinner and saw one of the suspects present at the same restaurant and greeted them,” stated De Kort.

“Because of the urgency of the hearings and the fact that the judge resides on Curaçao, the continuation was discussed, but not the case itself. The photo should not be deemed speculative.”

This newspaper contacted the lawyers in the Emerald case for comment, but they had no comment. It should be noted that photos and videos show all officials sitting together and not away from each other. The Emerald case will begin tomorrow, Tuesday.