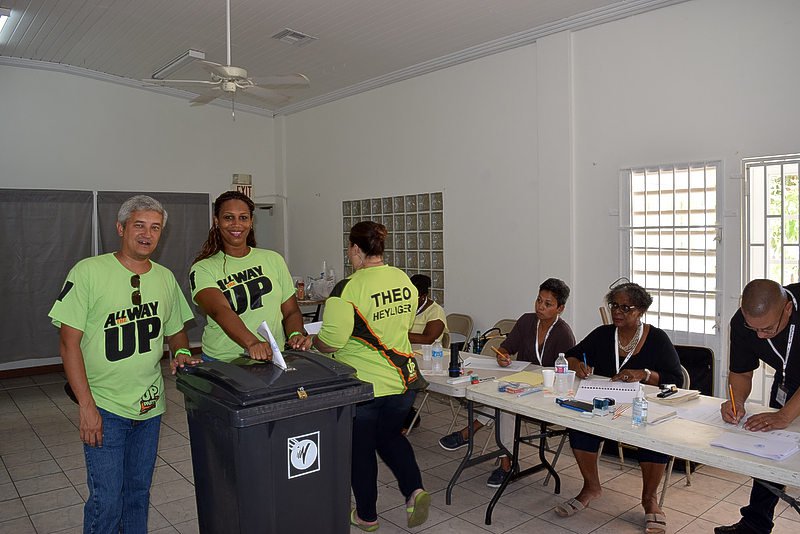 PHILIPSBURG–The United People’s (UP) party captured the most votes, but National Alliance (NA) and United St. Maarten Party (US Party) can be considered the winners, as they each picked up an additional seat, while the Democratic Party (DP) remained constant with its two seats after Monday’s Parliamentary election.

Coalition talks among the parties with seats are said to have already started. No information about the formation of a new Government was available at press time.

The results of the election are preliminary until the Central Voting Bureau has a public sitting on Monday, October 3.

The tallying of the votes has produced six new presumptive Members of Parliament (MPs).

Heyliger was the higher vote-getter, as he has been for multiple elections, but his votes fell from 2014 when he received 1,945 votes.

NA leader Prime Minister William Marlin has again been elected an MP with 775 votes, same as Education Minister Silveria Jacobs (778 votes). Both were elected in the 2014 Parliamentary election, but resigned to become ministers last year. Their seats were taken by current MP Rodolphe Samuel who was the fifth-highest vote-getter on the party’s slate.

Samuel did not get into Parliament, as his party only earned four seats in that election. It was the same scenario with current MP Hyacinth Richardson. However, the two differ in this election in that Samuel (211) is a presumptive MP in the Parliament decreed to take its first sitting on October 31.

MP Christophe Emmanuel (NA) has been re-elected with 258 votes.

The absolutely new MP from NA is Ardwell Irion (190).

Like with the NA where the number two on the slate Jacobs earned more than the list-starter Marlin, the DP slate saw a similar outcome. Current Public Health Minister Emil Lee, in the number two spot, earned 667 votes and party leader Parliament Chairwoman Sarah Wescot-Williams received 444 votes. Lee will be a first-time MP. He fell short of going into Parliament after the 2014 polls. At that time the red party’s second seat went to incumbent MP De Weever, who later went independent.

The four other parties in the race did not win any of the 15 Parliamentary seats, although St. Maarten Christian Party (SMCP) of retired pastor Wycliffe Smith came close, earning 856 votes, 110 votes less than needed for a seat.

UP had earned seven seats in the 2014 Parliamentary election, but lost two seats without an election on September 30, 2015, when MPs Silvio Matser and Maurice Lake went independent. That caused the UP-led coalition to collapse and the current NA-led coalition to take office a short time afterward with a mandate to execute electoral reform and prepare for snap elections.