Home Local News UP and DP merge as ‘United Democrats’ 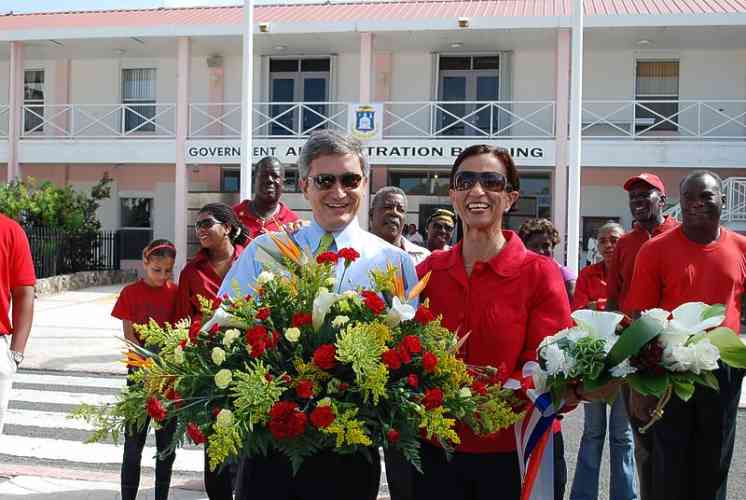 PHILIPSBURG–A new party is set to appear on the ballot for the February 26 snap Parliamentary election. The faces of the United Democrats will not be unfamiliar to the St. Maarten community, as the party is the “unification” of the United People’s (UP) party and the Democratic Party (DP).

Described by party board president Stuart Johnson as “a powerhouse political movement formed to take St. Maarten through the critical reconstruction phase” following Hurricane Irma, the new party is seen by some as the sewing back together of the DP. The country’s oldest party was torn in two in 2009 when UP leader Member of Parliament (MP) Theo Heyliger resigned from DP, the more than half-century-old party cofounded by his grandfather the late Dr. Claude Wathey.
Heyliger followed up his departure by launching UP in 2010. That move came after he had worked in a coalition with National Alliance (NA). UP won six of the 15 Parliament seats in the 2010 elections; DP took two. Together, they formed a coalition Government. That Government lasted until May 2012.
Heyliger will lead the United Democrats slate with DP leader MP Sarah Wescot-Williams in the number two spot.
The country’s “unaddressed realities” since Irma’s passage on September 6, 2017, the “crippled economy” and people “desperately needing leadership and hope” have all led “to the coming together of the United Democrats,” said Johnson in a press statement issued Thursday evening.
The announcement was made ahead of Nomination Day, today, Friday. The new party will submit its “full” slate of 23 candidates and request for the party colour to the Central Voting Bureau at Parliament House at 3:00pm.
Johnson calls on all UP and DP supporters as well as the entire community to join in the march to submit the list. “Let’s stand united for St. Maarten and its future,” he said.
The meeting point for today’s gathering is the statue of the late Dr. Wathey in front of Clem Labega Square at 2:30pm.
United Democrats is one of six parties expected to contest the upcoming elections.