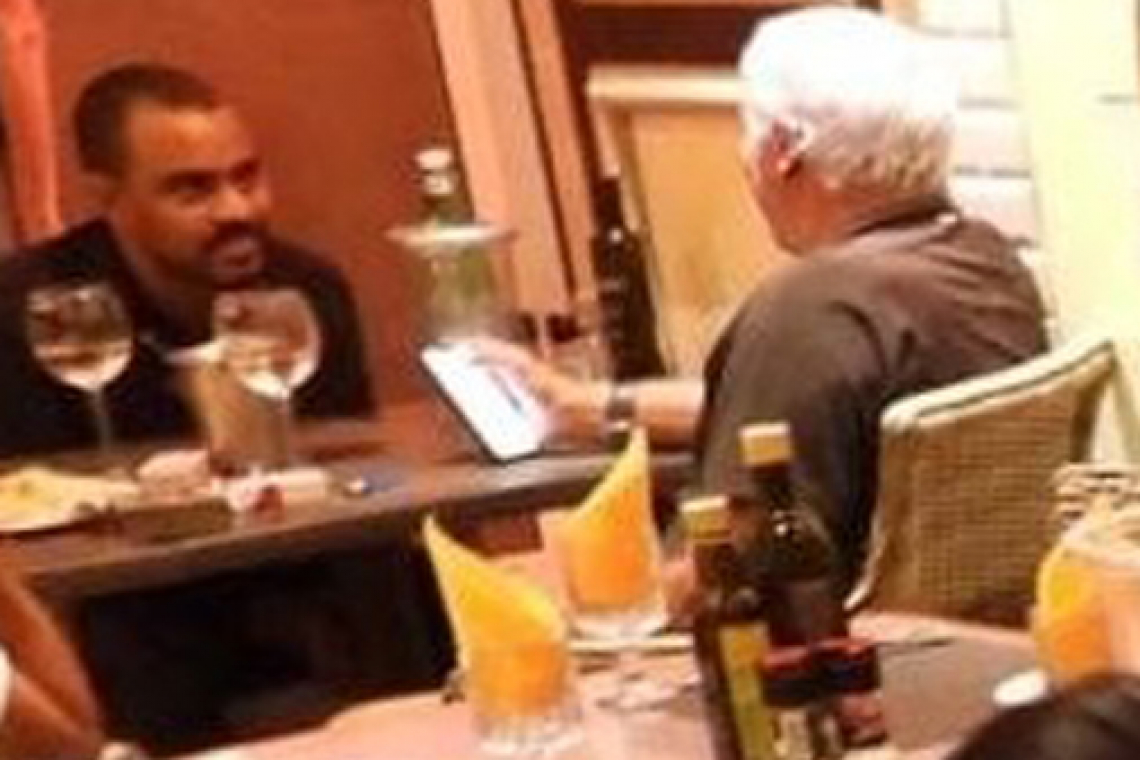 Rolando Brison and Francesco Corallo sitting at a table in this photo of November 2020.

PHILIPSBURG–United People’s (UP) party on Sunday criticised the questions posed by Dutch political party Christian Democratic Appeal (CDA) in the Second Chamber of the Dutch Parliament about a photo that shows Parliament Chairperson and UP party leader (MP) Rolando Brison in a restaurant with casino owner Francesco Corallo in November 2020.

“To read an article that shows a Member of Parliament in The Hague questioning our party’s leader for interacting with a citizen of St. Maarten, and making that a focal point for discussion, at a time when our people are suffering through a global pandemic, economic decline, job loss, homelessness, and an uncertain future, belittles the integrity of our elected leaders,” said UP in a press release on Sunday evening.

In the release, the party said it “portrayed an arrogant insistence by Dutch politicians that they can dictate every action our elected officials take, without regard for the masses whom they represent.”

“The honourable Rolando Brison, as President of Parliament, has a responsibility to all citizens of this country and no one should be telling grown people whom they can and cannot be in contact with. Whatever the Dutch government’s gripe or burden with Francesco Corallo, it is not for the citizens of St. Maarten or its politicians to carry. It is unreasonable to assume that as members of our small community, we cannot be cordial with each other or risk ridicule by the Dutch government,” it was stated in the release.

The UP party characterised Corallo as a major contributor to St. Maarten’s economy through his various business initiatives, which they argue have kept/given jobs to hundreds at a time when many have been laid off and unemployment has jumped.

Corallo was arrested in 2016 on orders of the Italian authorities in connection with tax evasion and bribery of several politicians.

UP party hinted at these allegations in the press release.

“We remind the Dutch government of the European Union (EU) directive … which requires member states to ‘take the necessary measures to ensure that, until the guilt of a suspect or accused person has been legally proven, public statements made by public authorities and judicial decisions other than those on guilt do not condemn the people as guilty’.

“We, the United People’s party, formally declare this to be an insult to the intelligence of our people. The Dutch government, through its financial assistance, has made many unreasonable demands in exchange for helping the people and government of St. Maarten address its financial shortfalls.

“Challenges that were magnified because of COVID-19 forced us to accept these conditions, which we are well-aware constantly change after being met. However, to tell our politicians and parliamentarians they cannot associate with certain citizens of this country, or to suggest that by doing so they are doing something wrong/illegal is not a condition we will accept,” said UP.

The party said that Brison has “nothing to hide and has a responsibility to represent and serve the people of this country, whether they elected him or not.” It added that the nature of Brison’s conversation with Corallo could have been about anything, including “ensuring that the people in his employ are being cared for and have job security.”

UP said it stands firmly in support of its MPs in their pursuit of decolonisation and in their efforts to bring public and private sector organisations together, especially in these dark economic times.

“To do this is to besmirch one’s character. As far as we are aware every citizen has a legal right to a defence, and [deciding – Ed.] innocent or guilty is the role of the Court. This is neither democracy or politics, but rather a petty attempt at slowing the process of rebuilding St. Maarten and keeping us dependent,” said UP.

The party said it has not been critical of the Dutch government after its cabinet fell over the child allowance scandal. “But it does teach a valuable lesson. When your neighbour’s house is on fire, don’t celebrate before you wet yours down,” it was stated in the release.