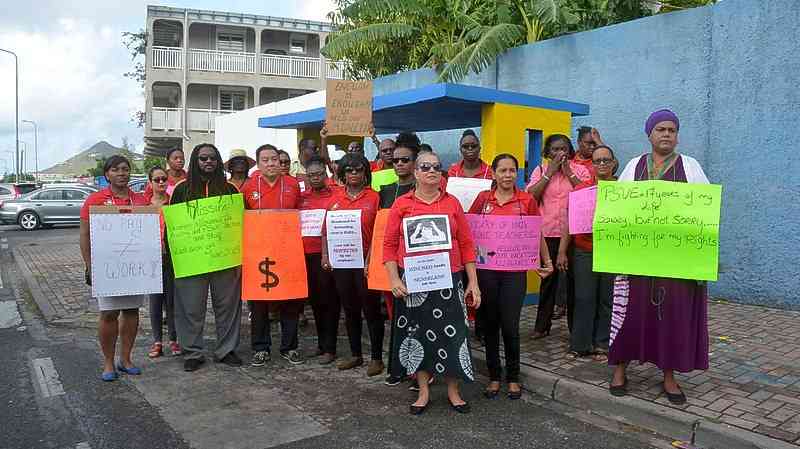 Teachers of both sections of St. Maarten Academy during their silent protest on L.B. Scott Road early Monday.

CUL DE SAC–A number of infuriated teachers of the two sections of St. Maarten Academy stormed out of a meeting with Foundation for Academic and Vocational Education (FAVE) Chairperson Roland Duncan before noon on Monday after they were told that it could not be ascertained when they will be paid their 2019 vacation allowance.

A number of placard-bearing teachers from both sections had taken to the streets near the school’s Academic section in a silent protest earlier in the day to send a strong message that they want their 2019 vacation allowance paid.

“Why are we the only teachers without vacation pay,” “I got 99 problems and my vacation allowance is one of them,” “Arm me with my money. Cries cannot pay bills,” “Don’t build the school at the expense of the teachers. Give us our money” and “FAVE teachers just wanna have funds,” were among the placards teachers displayed during their silent protest, which began after 7:00am and continued until just after 8:00am.

Several vehicles honked their horns in support of the educators as they drove past the protesting teachers. Some drivers slowed down to give a quick word of encouragement. “We support you” and “Keep up the fight” were some of the comments made to teachers by passing motorists.

Duncan said during the meeting with the teachers, which began around 11:05am with a Community Police Officer (CPO) present, that while he is cognisant that teachers have to be paid, he does not know when this will happen. Tensions ran high and many teachers walked out of the meeting.

About one third of the teachers from both schools boycotted the meeting, one third walked out of the meeting and one third remained to the end of the approximately 40-minute-long meeting. Teachers of both campuses were said to be furious.

Duncan also told the educators that permanent teachers will be sent home with severance packages, but said he does not know where the funds for this will come from either, as he will have to “take from Peter to pay Paul, and Peter would still have to be paid back.”

The teachers plan to continue their previously-agreed-to strategies as they continue to lobby for the payment of their vacation allowance.

Windward Islands Teachers Union (WITU) sent a letter to the FAVE board on Saturday, giving it an ultimatum of up to June 28 to pay the vacation allowance to teachers. WITU President Claire Elshot told The Daily Herald on Monday that the union will decide its next course of action if the allowance is not paid by this date. Teachers are entitled to their vacation pay, she stressed.

The union also addressed Duncan’s “no work, no pay” statements in its letter, noting that this cannot be applicable to teachers who took a few hours to sit in for information on the status of their vacation allowance, which they have not received to date.

She said also that while nothing can be done if the work agreements of workers on contracts are not renewed, there are procedures and financial consequences if the board wants to terminate the contracts of permanent workers.

Elshot called on MPs to “flex their muscles” during the ongoing budget debate to ensure that teachers are paid their allowance.

PSVE teachers held a sit-in for several days last week and Academic section teachers joined later with a go-slow over uncertainties regarding their vacation pay.

Duncan had said last week that that the “no work, no pay” rule would be applied to teachers who do not work, while the teachers contend that for them it is “no pay, no work,” meaning that if they are not paid their vacation allowance, they will not be working.

The FAVE board has so far contended that the lower subsidy it has been receiving from government as a result of a drop in enrolment at the PSVE section affects its ability to pay the allowance, and has indicated that measures will be taken as a result of the lower subsidy, including not renewing the work agreements of teachers who are on contracts.