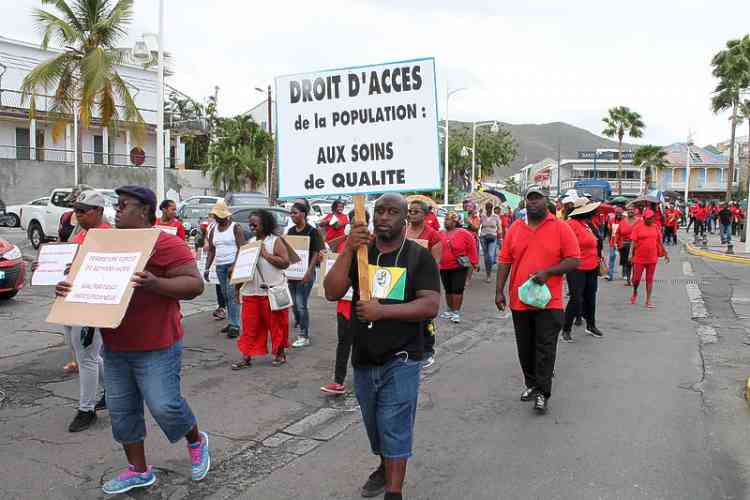 MARIGOT–Demonstrators taking part in Thursday’s start of an indefinite general strike called by unions occupied the Agrément roundabout yesterday morning for some five hours, preventing any vehicle access to Marigot and in the other direction to Rambaud and Grand Case, leaving motorists with no option but to turn around or wait.

Around 100 demonstrators had gathered at the taxi stand on the Marigot waterfront by 7:00am. They marched along the Galisbay back road towards the Agrément roundabout where the request was made to hold a gathering. A smaller-than-expected number of participants suggested a division among unions, as not all of them supported the cause.

Attempts to block the main roads occurred as early as 5:00am and Gendarmes reacted swiftly to remove barricades composed of pallets, car wrecks and rocks in St. James, Lowtown, Galisbay and Friar’s Bay.

Jean-Sebastien Hodge and Victor Paines of Soualiga United Collective were restrained by Gendarmes following altercations, but were subsequently released. The latter reportedly tried to prevent a barricade from being removed.

There was a heavy Gendarmerie presence at the roundabout, but with an already tense atmosphere Gendarmes acted with restraint to not provoke a more serious situation. Lt. Col. Sébastien Manzoni was seen frequently in dialogue with protestors in what were mostly cordial exchanges. The march and the protest at the roundabout passed peacefully despite one or two confrontational verbal exchanges with Gendarmes.

“The worst part about this situation is the total disrespect from our leader,” said Opposition Territorial Councillor Bernadette Davis who was marching with the strikers.

“It’s not just the CTOS situation, there’s a problem in every sector – education, the seniors, unemployment, with reconstruction. It goes on. By not having the manners to sit down and negotiate and communicate with his own people, he is disrespecting the same people who voted him into power. There’s something seriously wrong with that. As political leaders we have to listen to the population. And when that doesn’t happen this is what you get.”

One or two scooters unwisely attempted to pass through the roundabout and the drivers were told by protestors in no uncertain terms to turn around and leave. Only emergency vehicles were allowed access. A small bus containing schoolchildren from Emile Choisy School returning from an outing in Friar’s Bay was not allowed through. The teacher was forced to escort the children to the school on foot.

Various union members spoke at the roundabout to get their message across to the population and to demand opening of negotiations with the Collectivité and Préfecture. They declared the turnout a success, saying today’s strike action was “just the beginning.”

“We are saying this is not a budgetary problem, but a political decision that has to be made,” she said. “The strike starts today but doesn’t end today. It ends when we sign final agreements. Our objective is to get everyone around the table to negotiate what we deserve.”

Lenny Mussington of Soualiga United Collective urged the marchers to remain vigilant and keep up the pressure.

“Only when we are united and mobilised will we get the ears of the government and those in authority,” he said. “If we suffer silently, we just get more of the same treatment. What St. Martin will be is what we the people will make of it.”

The unions requested a meeting with Préfète Sylvie Feucher. This was granted verbally on the condition that the roundabout was reopened. But they wanted written confirmation. Confirmation was then sent by e-mail, which was accepted. The meeting was due to be held at the Préfecture at 5:00pm. President Gibbs was off-island but was expected to arrive back in time for the meeting.

The roundabout was finally reopened to allow traffic circulation at around 2:30pm. Marchers planned to make stops at the Bethany Home, the Rectorat, the Collectivité, and other locations to submit the unions’ grievances.

It was understood from a source close to the afternoon meeting between the union delegation and President Gibbs and Préfète Feucher that no agreements had been reached. It was not known what specific points were discussed.