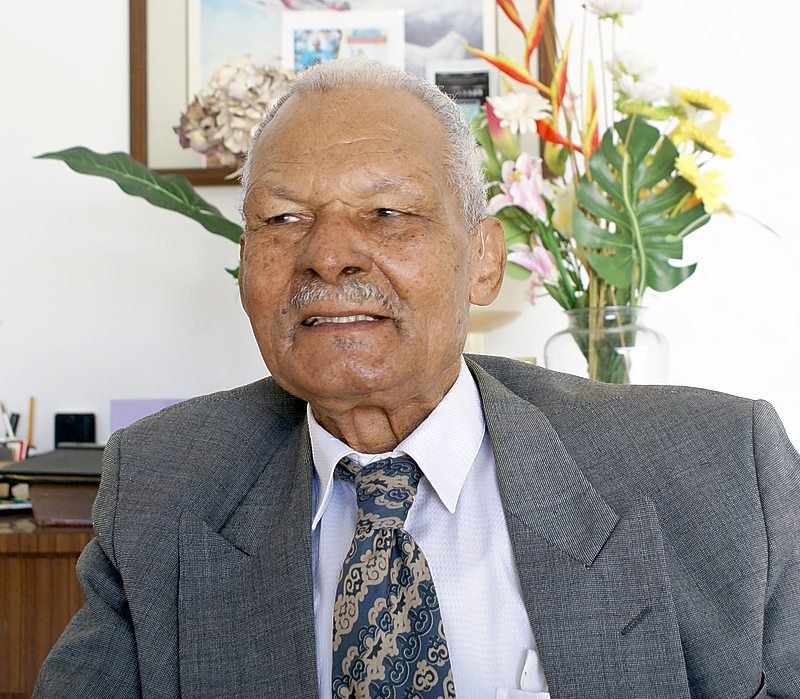 ANGUILLA–The country is in mourning following the death of the “Father of the Nation” James Ronald Webster. On Friday, December 9, flags were flown at half-mast following his death earlier in the day, and all Government offices were closed from 1:00pm.

Chief Minister Victor Banks spoke in an address on Radio Anguilla, saying the nation is in a state of sadness. He said it is especially sad that Webster has died on the eve of the 50th Anniversary of the Anguilla Revolution, and he is sorry he will not hear the many accolades he will be given on that occasion.

Banks said his thoughts are especially with Webster’s wife Cleopatra Webster, and his prayers are with her and the entire family during this very difficult time. He said Webster has affected all Anguillians through his service and generosity, and thanked him for the humility of his leadership.

Governor Christina Scott said it was a privilege for her to meet Webster. She reported that he told her that countries do not develop people, but that people develop countries. She noted that even in recent years it was clear he had not lost his passion to see a better Anguilla. “Today everyone in Anguilla unites to remember the “Father of the Nation”, James Ronald Webster, who has sadly passed away.

Webster, Anguilla’s first Chief Minister, played a pivotal role in the revolution, stepping up with courage to lead his people to a brighter, better future. He demonstrated how, through force of character, nations can be formed and grow through peaceful, purposeful actions. By coming together, and looking to the future with common intent and for the good of all, fairness and opportunity can prevail. My thoughts and prayers are with Mrs. Webster, his family and friends, and all those who mourn his passing today,” the Governor said.

Minister of Social Development Evans McNiel Rogers, who is currently Acting Chief Minister as Banks is overseas, spoke on behalf of the Government and people giving condolences to Webster’s wife and family. He noted that Webster was born on March 2 1926 under harsh conditions, which led him to go to St. Maarten at the young age of ten. “Webster was firstly a good shepherd, who was willing to give his life for his sheep.

Secondly, he was a visionary, a man with a mission; a burning desire to see Anguilla go forward. Thirdly, he was a man of steel. All these qualities contributed significantly to his emergence as Leader of the Anguilla Revolution of 1967,” said Rogers. Rogers said this is the time to reflect on all that Webster has done for Anguilla. Webster will be given a state funeral at a date to be announced and that day will be a public holiday.

Leader of the Opposition Palmavon Webster also gave a radio address, expressing her “great sadness at the death of the beloved Father of the Nation.” She noted that when Anguilla faced its darkest hours and was in despair for the future, Webster came to the fore to lead the nation. She suggested that the people of Anguilla should give thanks for knowing him and loving him and the fact that he loved Anguilla. “With our grief, let there be gratitude for the keen interest he took in Anguilla’s destiny,” she said. She expressed condolences to his wife and family saying what he did for our people will never die.

Former Chief Minister Osbourne B. Fleming has been in contact with the Ministry of Home Affairs with a view to conveying condolences on the passing of the Father of the Nation James Ronald Webster to his wife Cleo, children and extended family, as well as to the people of Anguilla. Fleming has indicated that his thoughts and prayers are with the family and all Anguillians mourning the death of this outstanding Anguillian at this time.

Ronald Webster was Anguilla’s first Chief Minister and a genuine revolutionary leader. He was one of the early recipients of the Anguilla Badge of Honour and Queen’s Certificate for his outstanding contribution to the Anguilla Revolution. Flags will also be flown at half-mast as a mark of respect on Monday, December 12, and on the day preceding the funeral and the day of the funeral.