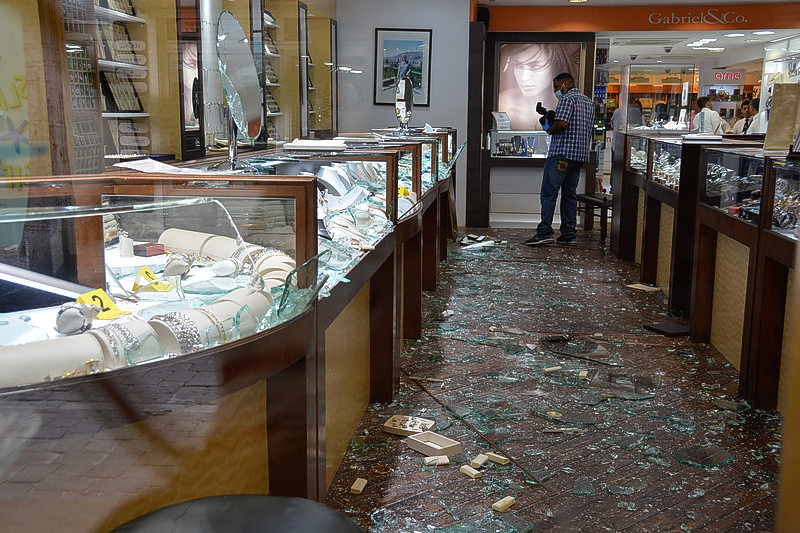 A police forensic officer conducts his investigation at the robbery scene shortly after the incident on Thursday.

PHILIPSBURG–Three masked armed robbers stormed into a crowded Ama Jewelers on Front Street around 1:40 Thursday afternoon and robbed the establishment of an undisclosed quantity of jewellery.

Owner of the establishment Arun Bijlani told The Daily Herald after the incident that three armed men stormed into the store while it was filled with about 15 customers. One of the men held up the security guard at the entrance, while the other two further entered the establishment.

One of the men was armed with a sledge hammer and began smashing the glass counters of the store. About eight counters on one side of the store were completely destroyed. The men then began grabbing jewelry from inside the smashed counters as well as jewelry that had been hanging on the wall behind the counters.

After grabbing a quantity of jewellery the three men fled the scene in a white Suzuki Celerio that had been waiting outside the store with the doors open. The Daily Herald understands that the car bore the number plate 555C, which is believed to be a St. Barths number plate. This newspaper also understands that the vehicle in question was stolen from Concordia in French St. Martin, Wednesday night.

The getaway car with two doors open outside the store, while the robbery was in progress.

At the time that Bijlani spoke to this newspaper, he was still unaware of the quantity of jewellery that had been stolen. “We really don’t know where to start,” he said. “We are just trying to clean up all the glass at the moment.”

Luckily no one was hurt during the incident which Bijlani said was a blessing. “We are very blessed that everyone is ok.” This was the first time the establishment had been robbed in this manner.

In the meantime, Police Spokesperson Chief Inspector Ricardo Henson confirmed to this newspaper that the establishment had been robbed and a quantity of items had been stolen.