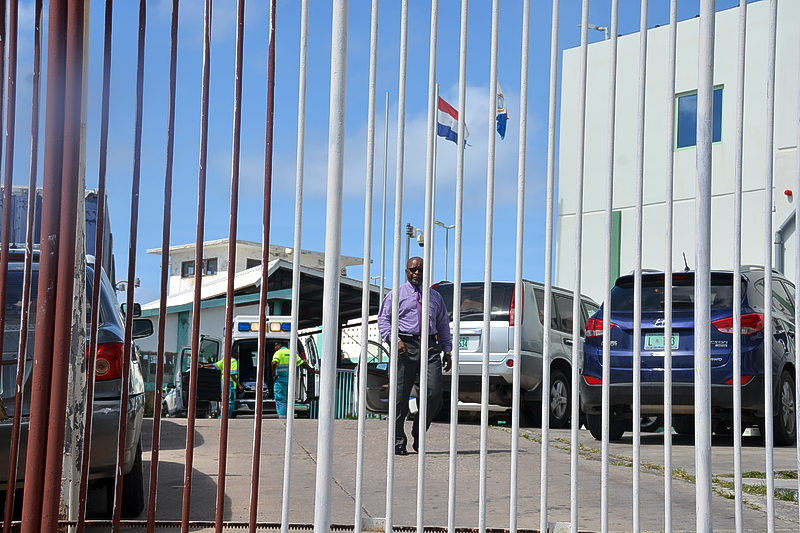 PHILIPSBURG–Prisoner Omar Jones (41) was shot and killed by a fellow inmate in the Pointe Blanche prison close to 9:00am Wednesday.

Eleven inmates are said to have been involved in the shooting while the gun used in the murder was found far from the scene.

Jones was shot in the head and back. He was seen as the leader of the notorious Bling Bling crew. On their arrival, ambulance personnel applied CPR in an effort to save him, but to no avail. Questions already have started to surface as to how a loaded gun got into the hands of a prisoner.

Multiple searches in the prison were conducted by the Police Arrest Team and the K9-Unit was summoned to search the cells for any contraband. During an extensive search, the pistol was found far away from the scene where Jones had been murdered.

The Daily Herald understands that authorities conducted a search last week after they received a tip that a gun was circulating in the prison. Management ordered the search, but no weapon was found.

In a press statement on Wednesday evening, Minister of Justice Edson Kirindongo expressed his concern about the shooting.

Immediately after receiving the call about the shooting, the Emergency Dispatch sent several police patrols, paramedics, detectives and Forensic Department to the scene to initiate a criminal investigation.

“On the scene all necessary steps were taken by the prison guards on duty along with the assistance of the police officers to maintain the situation ‘status quo’ in order for the Forensic Department to collect evidence and for the detectives to interview potential witnesses,” according Kirindongo’s statement.

The Prosecutor, head of the Pointe Blanche prison and Police Chief were all at the prison. The victim’s body was confiscated for further investigation and transported to the morgue. Kirindongo said the investigation was in its preliminary stage and many details remained unavailable at this time.

Family members of the victim will be notified of the situation as the investigation progresses. Kirindongo expressed his regrets for this type of conduct within the system at the Pointe Blanche prison and said he had been doing all possible to give the prison guards all the necessary tools to raise the level of security in the prison during his short term as Minister of Justice.

Guns at the prison

Two guns were found in the prison in September 2014 and one man was arrested for attempted murder. The man, who was said to be one of the main players in the prison disorder at the time, was identified as 33-year-old U.L.W., known by the nickname “Nuto.” Nuto is said to be a lieutenant in the Curaçao gang “No Limit Soldiers.”

Authorities conducted another search on September 11, one day after the two guns were found at the prison, and numerous homemade weapons such as cleavers, machetes and knives or shanks, cellular telephones and many other illegal items, including female G-string underwear, were removed from the cells. No guns or ammunition were found during the second search.

Jones and triggerman Carlos Richardson were sentenced by the Court of First Instance to life in prison on November 15, 2012. Their sentences were reduced to 29 years and nine months by the Joint Court of Justice on December 20, 2013.

Jones was involved in the infamous Vesuvius case, which involved four murders, two attempted murders, firearm possession and membership in a criminal organisation with seven suspects.

The crimes were committed between April and August 2011 against the backdrop of a war between two gangs involved in the drug trade. Violence erupted after the late Omar Jones’ brother Amador was shot dead on April 16, 2011.

The crimes included the attempted murder of Omax Bay and Kennedy Fergus in Dutch Quarter on April 20, 2011, the murder of Miguel Arrindell in Cole Bay on May 25, 2011, the murder of Arrindell’s brother Rodolfo on Fort Willem Road on July 7, 2011, and the killing of Eric Lake and Kevin Gumbs in Madame Estate on August 17, 2011.

The identity of the Jones’ shooter remains a mystery and none of the inmates are talking to investigators about the incident. It is believed to be an assassination by Jones’ rivals.