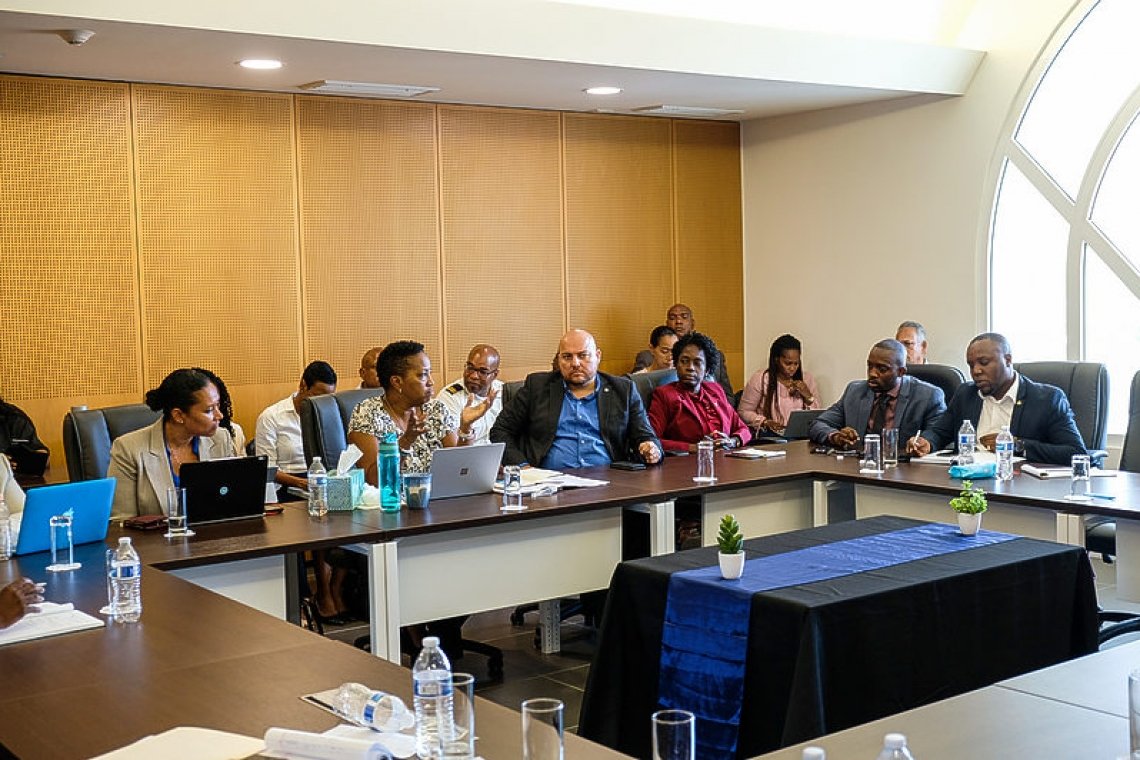 Prime Minister Jacobs (second left, seated at table) addressing the EOC and MPs during an emergency meeting on Thursday.

PHILIPSBURG–Prime Minister and Chair of the Emergency Operations Center (EOC) Silveria Jacobs has made the decision to postpone Carnival 2020 until further notice in response to the rapid spreading of coronavirus COVID-19 around the world. This was decided after emergency meetings held with the EOC and Members of Parliament (MPs) on Thursday.

The emergency meetings were called because of the announcement by the World Health Organization (WHO) on Wednesday, March 11, that classified the current COVID-19 outbreak as a pandemic. A pandemic is the “worldwide spread of a new disease,” according to the WHO.

Jacobs had also invited MPs to the meeting so they could be updated and give feedback on the current state of affairs. A meeting was then called with St. Maarten Carnival Development Foundation (SCDF) President Alston Lourens and SCDF Treasurer Michael Granger to inform them of the decision.

SCDF said in a Facebook post on Thursday evening that it agrees with the decision and that public safety comes first.

“SCDF will issue a series of notices to the public and all Carnival stakeholders in the coming days. Please monitor the media for updates,” said SCDF in the post.

“The decision to postpone Carnival was taken in keeping with the WHO recommendations, which advise persons to avoid large crowds. Carnival involves the gathering of large crowds over a long period of time, involving close contact between persons. This is a scenario which would pose a threat to the safety and well-being of the staff, participants and the community at large,” according to a press release issued by the Office of the Prime Minister on Thursday evening.

“While St. Maarten currently has no confirmed cases of COVID-19, we continue making all necessary preparations to prevent the spread of the virus, as well as to prepare for the possibility of an outbreak. Government is taking all necessary precautions to ensure public health,” said Jacobs.

“In the interest of safety and security of the community, government has also put a hold on the issuance of permits for events catering to large crowds. The maximum number of persons allowed to gather during this critical period will also be established. This decision can also impact gatherings which do not require a permit, and the general public will be informed once other such gatherings have been identified. These measures, together with travel restrictions, are being encouraged to prevent exposure to the COVID-19 virus,” according to the press release.

“As government, we understand that some may be affected by the decision taken. However, the health and safety of the population outweighed the postponement of our largest cultural event and we will look forward to a time when the threat has been minimised enough for us to return to normalcy,” concluded Jacobs.