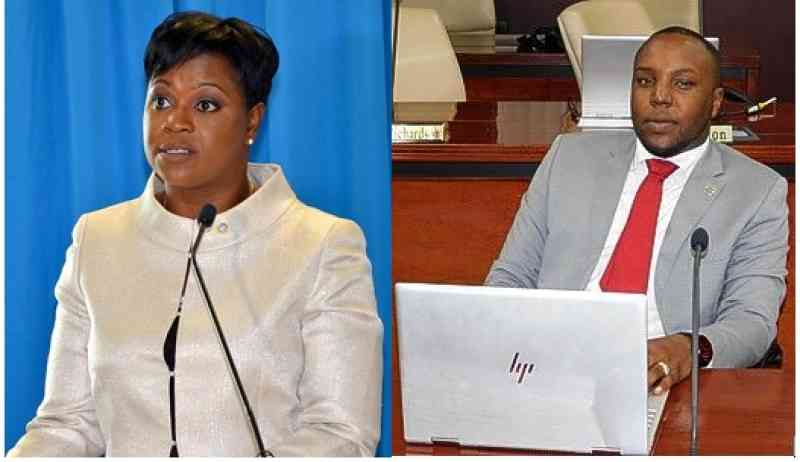 PHILIPSBURG–Opposition Member of Parliament (MP) Egbert Doran (National Alliance) says he was threatened by Prime Minister Leona Romeo-Marlin prior to the start of Friday’s aborted sitting on the 2019 draft budget and intends to file a complaint with police report against her.

Romeo-Marlin has denied that she threatened Doran in any form, but she is taking his allegation against her very seriously. She told The Daily Herald on Friday evening that she did not approach the MP in any threatening manner and is prepared to defend herself should he take any action.

Commenting on the conversation she had with Doran in the foyer of Parliament House, Romeo-Marlin said she had asked the MP to refrain from putting her life in jeopardy with comments about her on the radio.

“What I can say is, the MP has a personal vendetta against me due to me carrying out my duties as Minister of General Affairs in a matter involving his mother,” Romeo-Marlin said.

He said the prime minister, in front of witnesses, had threatened him “by saying ‘keep talking and you are going to see’.”

Doran said: “I don’t know what that means, but I will keep talking, because ‘parley’ is the French word for talk and we are in Parliament and I will talk to represent the people of St. Maarten. I remain unfazed and they can’t keep a good man down.”

Ending his notification, Doran issued a warning of his own to the prime minister: “Do your job and stop selling out the country. That is my opinion and that is how I feel, and I will continue to represent the people of St. Maarten, which you should do as well.”

Prime Minister Romeo-Marlin has come under increasing fire from MPs across the aisle for what many have labelled as her pro-Dutch stance. She is seen as giving in to the ever-increasing demands of the Dutch government in returned for recovery funds, much needed to rebuild the country following the devastation of Hurricanes Irma and Maria in September 2017.