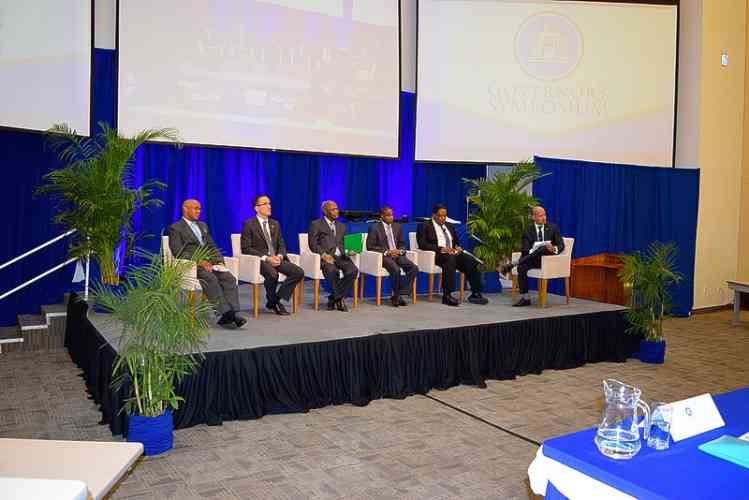 ~ Govt. urged to get proactive ~

CUPECOY–The critical question for a small island developing state such as St. Maarten is: “Do we have the time needed to effect the required strategic actions to tackle climate change,” Governor Eugene Holiday questioned at the opening of the seventh Governor’s Symposium, themed “Climate Change and Small Island States: A Call for Strategic Action,” at American University of the Caribbean (AUC) campus in Cupecoy on Friday morning.

A strategic climate change governing agenda must be discussed, and a climate change response unit is necessary. This unit must be a “separate,” yet integral part of the government’s apparatus.
That unit will focus on executing strategic climate change priorities by engaging government, the private sector and residents to become more aware and active participants in bringing about positive change.
Collaboration with regional and international institutions and entities is a must for the climate change response unit, said Holiday. The unit “must be mandated” to make this a priority.
Tackling climate change requires tangible actions such as “increased investments in greater energy and infrastructure resilience.” This can materialise by completing the underground utilities project throughout the country and taking a large step to clearer, sustainable sources of energy such as solar power.
The unit and government must “secure financing from an effective mix of private insurance, national first response funding and regional disaster risk facility.”
St. Maarten is “very susceptible” to the global impact of climate change and this is a “major governance challenge” for the country.
The country does not significantly contribute to the negative impact on the earth’s climate; it is nevertheless amongst the most vulnerable, Holiday said.
“We are already at risk,” he said, pointing to the ongoing drought, the devastation of two unprecedented hurricanes – Irma and Maria in September 2017 – and Nature Foundation’s sea level rise prediction that puts the country’s capital Philipsburg and other low-lying areas under water in the next two decades.
Holiday left attendees with this strong statement: St. Maarten is “running out of time” to enact timely climate change measures. However, he is optimistic that “acting now, we can save the day for future generations.”
Prime Minister Leona Romeo-Marlin built on the governor’s call by telling the symposium government is “tackling climate change from several angles,” including through striving to attain the sustainable development goals (SDGs). Government is “committed” to working on climate change challenges.

Data needs
Meteorological Department of St. Maarten head Joseph Isaac called in the symposium’s “Climate Change, Weather and Environmental Patterns” segment for improved weather data collection, perhaps in collaboration with the French side of the island to effect better planning and mitigation.
The formation of a network of weather stations/radars is required “to assist in early warning systems” for natural disaster planning, Isaac pointed out.
Sea level monitoring is also vitally critical for St. Maarten to plan for the impact of the planet warming up and the melting of polar ice caps, he said.
Rounding off the segment, Climatologist Cedric van Meerbeeck of Caribbean Institute for Meteorology and Hydrology outlined the science behind climate change to attendees and left behind the very frightening thought that by the end of the 21st century the Caribbean region is heading to a one- to five-degrees-Celsius increase in temperature, at least a one-metre rise in sea level and the lengthening of the annual hurricane season.

Yes, climate matters
Windward Islands Bank General Managing Director Derek Downes, speaking in the “Climate Change effects on socio-economic development” segment, urged government to establish a “disaster fund” that will be activated following a climate change event to cover clean-up and reconstruction of the country. This fund can be financed by an “environmental levy.”
He also called for improving and building of coastal defences, updated environmental laws, improved drainage systems and improving and enforcing building standards. Building on the latter, Downes unapologetically stated the country has “too many shanty towns.”
University of the West Indies Faculty of Science and Technology Deputy Dean Michael Taylor pressed home the point that “climate matters” because the climate has already changed and will continue to change.
Climate matters because it “demands change” through a change in attitude to the phenomenon, change of approach and for people “to act with respect” to climate change, he said.
On the current climate change path, Taylor said, “We are heading towards water deficit” aggravated by less rainfall. This also endangers food security as crops struggle in higher temperatures and drier conditions, impacts already-burdened health care and the wiping out of coastal areas and infrastructure.

Proactive
Caribbean Community Climate Change Centre Director Kendrick Leslie, the symposium keynote speaker, described the impact of climate change on the region as “devastating is an understatement.”
Adaptation is the “only option” for small island developing states to battle against the hurdles of climate change, but they are not economically positioned to do without help from developed countries, Leslie said.
Adaptation suggestions include storm-proofing of schools to ensure less impact to educational development, securing water harvesting routes (wells) for water security, protecting the central emergency operating centre, putting all utility cables underground and planting category-five hurricane-resistant light poles.
Governments should be more proactive in tackling climate change, Leslie said, as he urged all to take the examples of measures Bermuda, the British Virgin Islands and Aruba, among others, have taken to mitigate the growing impact of climate change.
The symposium concluded with a panel discussion with all speakers, moderated by Nature Foundation Managing Director Tadzio Bervoets.

October 20, 2021
0
MARIGOT--To prepare the 2021/2022 tourist season with a satisfactory level of health security, Préfet Serge Gouteyron has decided to implement the health pass in...

October 20, 2021
0
PHILIPSBURG--All travellers, both residents and tourists, who are fully vaccinated with vaccines approved by the National Institute for Public Health and the Environment RIVM and the World Health Organization (WHO), will no longer require a COVID-19 test to enter...
Read more
Local News

October 20, 2021
0
PHILIPSBURG--All travellers, both residents and tourists, who are fully vaccinated with vaccines approved by the National Institute for Public Health and the Environment RIVM...