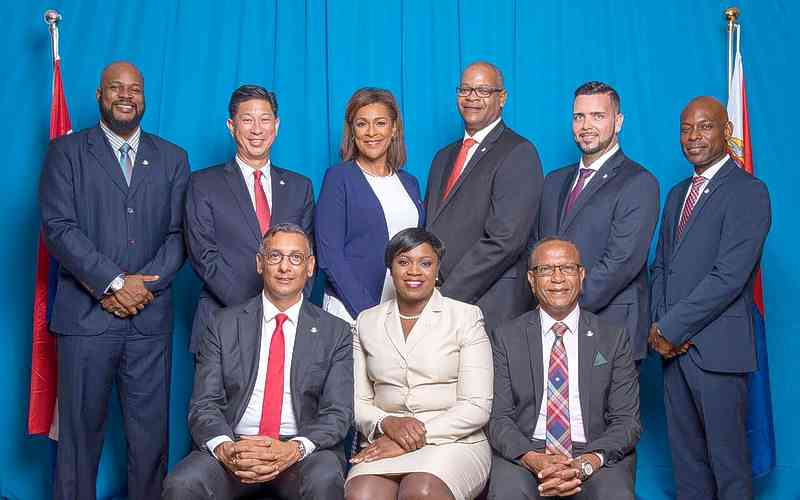 St. Maarten’s seventh cabinet in less than eight years since the attainment of country-within-the-Dutch-Kingdom status took the oath of office on Monday, a week shy of the four-month mark since the February 26 snap elections. It is also days before the constitutional deadline of July 2 for current Public Health Minister Emil Lee to relinquish one of his dual posts – Member of Parliament and minister.

Holiday said in the first constituting meeting of the new Council of Ministers in the Government Administration Building that there is still “a whole lot of work to be done to meet needs of the people,” especially in employment and housing.

In tackling their Herculean task, he urged the ministers “to do so from the perspective of opportunities” and called on civil society and the private sector to support them “as they look to create opportunities … to rebuild a sustainable St. Maarten.”
The challenges, 10 months after the devastation of Hurricane Irma, “weigh heavy,” he said, “but opportunities give energy needed.”

Among the clear opportunities to build back better, according to Holiday, are strengthening the country’s infrastructure via a hurricane-resilient building code, tackling the constantly-burning landfill and implementing a sustainable waste-management plan, restoring Princess Juliana International Airport to its prominence, propelling and supporting the rebuilding of hotels and restaurants, better healthcare and revitalising the country’s capital and commercial centre Philipsburg.

The strengthening of a solid relationship with the Netherlands and the World Bank to reignite the economy is also a key opportunity, said the Governor.
The seizing of opportunities is not in a vacuum, it stems from “sound financial management,” a path he urged the new Council of Ministers to take to restore the country in this post-hurricane period.
Holiday said he trusts that in keeping with their oath, they will seize opportunities aimed at serving the people.

Not usual business
Romeo-Marlin said in her inaugural address as the country’s prime minister for a second time: “I am very cognizant of our present reality and if we are to take this country out of its devastation into a future of prosperity, we cannot take a ‘business as usual’ approach in our daily functioning as a government.”

Irma created “unimaginable challenges,” she said, echoing the sentiment of the Governor. “But, it has also brought with it new opportunities for growth and general improvements.”
The current times have given St. Maarten “a unique momentum to unite and rebuild” a country that meets the needs of the people, now and for future generations. “It opens new doors for setting it right and taking the government apparatus and this country to the next level.”

Outlining the plan of her administration, she said: “We will provide affordable housing, provide job security, revitalise the economy, strengthen our cultural heritage and ensure that everyone has access to quality education and sports activities. We believe primary healthcare should be available to all. Therefore, we will work consistently to make healthcare insurance and medical service more affordable and accessible.

“To set it right and revive St. Maarten’s economy, we must have a structured approach. We must take full advantage of the opportunity to enhance our public service and plan comprehensively to deal with our administrative challenges and restructuring needs. We will face the challenges ahead together.”

St. Maarten is grateful for all funding received for recovery, but these funds by no means meet the demands for reconstruction in the manner that is envisaged by this coalition, said the prime minister. “Our goal is to identify all potential funding sources in order to face the current economic realities.”

The Council of Ministers will be guided by the “Building a Sustainable St. Maarten” Governing Programme 2018-2022. This programme “reflects the shared vision of the need for urgent rebuilding and improvement of our economic viability, and of achieving our political and economic goals in a sustainable manner, fully aligned with the globally adopted sustainable development goals.”

The Leona Romeo-Marlin II cabinet replaced the five-month interim cabinet that was also headed by the current prime minister. That cabinet came into place following a shift in parliamentary majority after Hurricane Irma. The interim cabinet was installed to see the country into the February 26 snap election.

The swearing-in of the new ministers created two vacant seats in Parliament due to Lee and Smith becoming ministers. Those seats are to go to the next highest vote-getter on the United Democrats slate who is not already in the legislature – former MP Tamara Leonard and the one on the SMCP slate Claude Peterson.