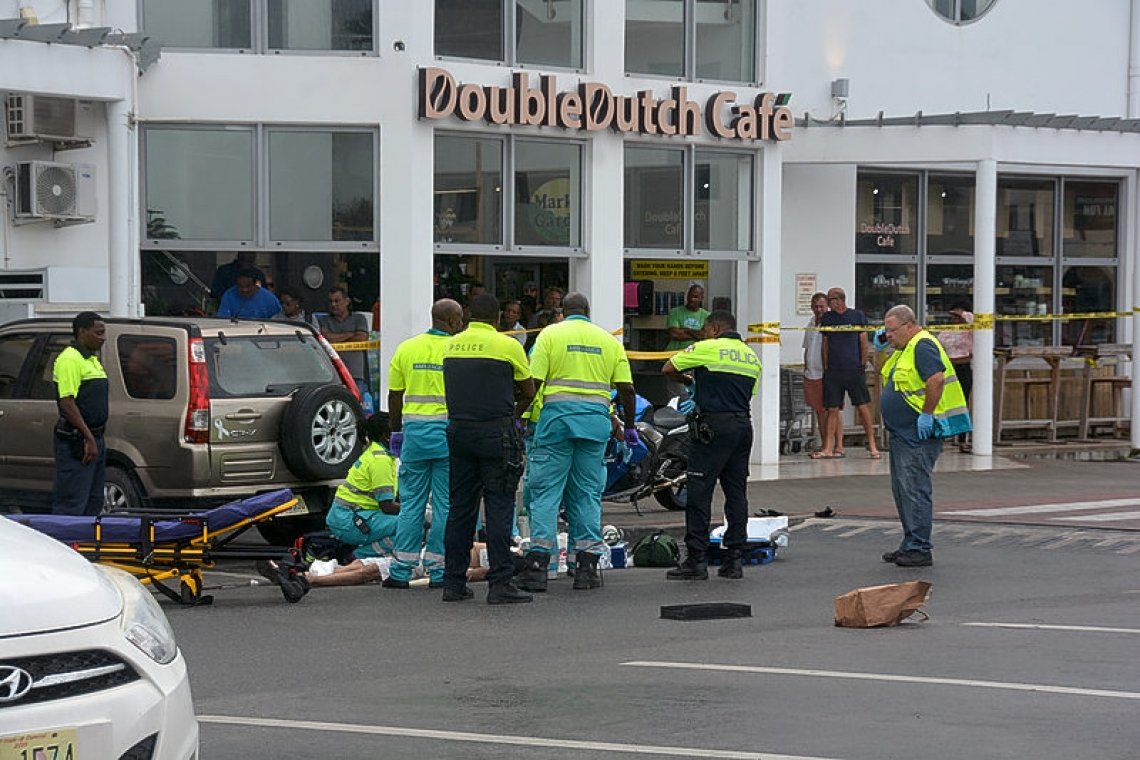 Paramedics trying to revive a man who was shot and killed in an armed robbery in front of Market Garden on Sunday afternoon. Story on page .

COLE BAY–A man was shot in an armed robbery in front of supermarket Market Garden near Pelican around 2:00pm Sunday. Ambulance Department personnel treated him at the scene, but the man succumbed to his injuries and died.

According to information gathered at the scene, the man was sitting on his scooter in the parking lot in front of the supermarket when he was approached by an unknown man who was brandishing a firearm. The armed man – who was dressed in short pants, slippers and wearing a bandana over his face – demanded that he hand over his scooter.

During the robbery, the man shot the victim in his upper body. After shooting the man, the robber fled the scene on the scooter in the direction of Simpson Bay.

Several persons in the vicinity of the popular supermarket witnessed the shooting. They described the shooter as between five-feet-five-inches and five-feet-nine-inches tall, light brown in complexion, with a slim build and between 18 and 25 years old. They also said he has braids or dreadlocks that hang down to his shoulder.

The St. Maarten Police Force KPSM and the Ambulance Department were sent to the scene shortly afterwards. They found the man lying in the parking lot and bleeding from the gunshot wound. Paramedics administered cardio-pulmonary resuscitation (CPR) on the man in an effort to revive him. However, the man died of his injuries in the parking lot.

A doctor arrived sometime later and pronounced the man’s death. The doctor said the man had been killed by the gunshot he received. So far this year, he is the fourth person to be killed in St. Maarten as a result of gun violence.

The Daily Herald understands the man was a worker in restaurant Sale e Pepe in Simpson Bay. He was reportedly at the supermarket to do grocery shopping.