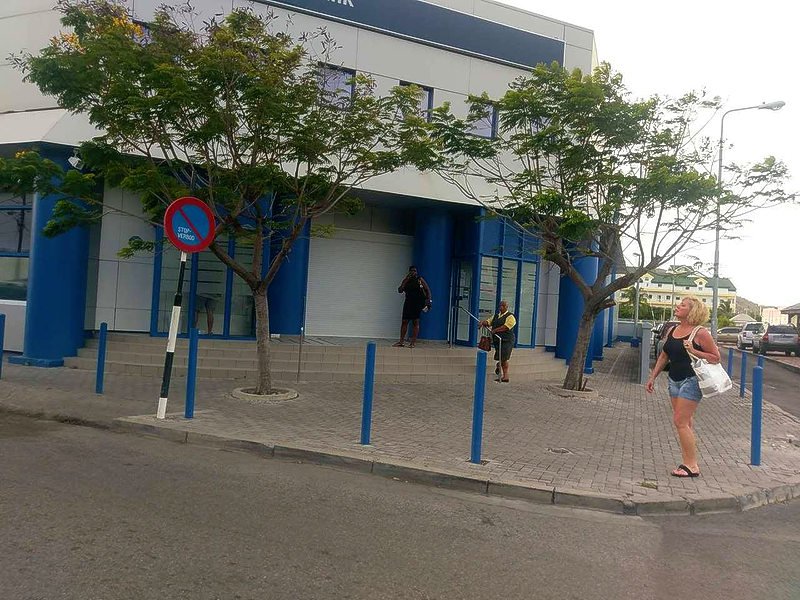 PHILIPSBURG–Police are investigating another robbery, this time at local bank RBC in Philipsburg on Friday afternoon. Reports suggest that an unidentified man stood in line like any other customer and when he approached one of the tellers, demanded cash from her and warned her not to make any sudden movements via a note he slipped to the teller. The note stated that he had explosive device on him.

The employee complied and handed a large sum of cash to the man. The robber who did not show any signs of having a weapon, walked out of the bank and security were only alerted after the man left the area. Police were notified about the robbery and stormed to the bank.

The Police is asking anyone who may have information regarding this robbery to get in contact with the police department by calling 54-22222 ext. 213-214, the anonymous tip line 9300 or 911.

According to persons who were in the bank, the man did not wear any mask and police should be able to identify the man on surveillance cameras from the bank.

RBC Senior Manager of Communications Hanneke Stomp-Harmsen said, “As this matter is currently under police investigation we cannot comment at this time. We take the safety and well-being of our employees and clients very seriously and are grateful that no injuries were sustained as a result of the incident,” she stated.

This is not the first time a robbery using a note took place on island. On February 5, 2016 a man who walked into Scotiabank on and handed a note to a teller stating that a bomb was in the building and demanding that the teller hand over money.

Polish national Gracian J. Furgala (35) confessed that he had used this method, which he had researched on the Internet via search-engine Google.

The bomb threat persuaded the teller to hand him US $8,730 and NAf. 9,220 in cash, after which he managed to leave the bank unnoticed.

No information was provided on the exact amount taken by the man on Friday afternoon.