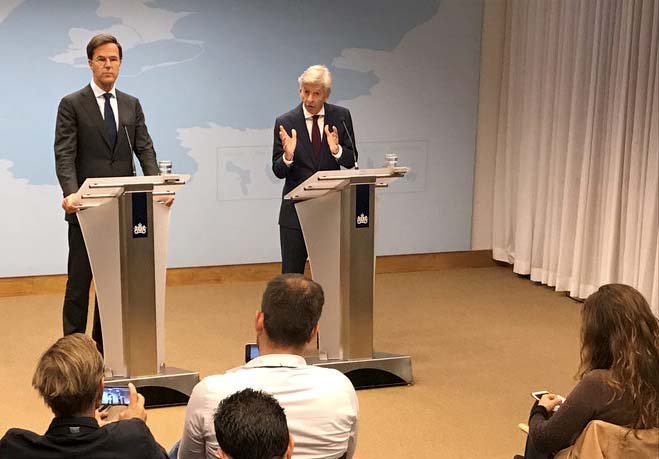 THE HAGUE–The Dutch marines stationed in St. Maarten have the full mandate to act harshly against looters and will apply force, if necessary, to maintain public order.
Dutch Prime Minister Mark Rutte and Minister of Home Affairs and Kingdom Relations Ronald Plasterk stated this during a press conference on Saturday. “Looters should be aware that we have the authority to act with force and that the marines will do so to keep the order. You don’t want to get in trouble with the Marines,” said Rutte following a meeting of the National Crisis Centre. The Dutch cabinet met about the St. Maarten situation for the third day in a row, and will meet again tomorrow, Sunday.
Rutte said that even though there was still a great sense of anxiety and extreme concern of the people in St. Maarten, the emergency assistance was progressing with speed, not only food and water wise, but also with more militaries on the ground.
On Saturday, an additional 100 militaries were brought on land. On Monday another 100 marines will be going to St. Maarten, and if necessary, another 150 on Wednesday. Up to Friday, the military capacity was 230. “The situation is grim, which we don’t want. Hence, the strengthening of the military capacity and the harsh acting against looters.”
The Prime Minister said that a successful operation was carried out to evacuate the 65 dialysis patients. He said that this was a matter of life and death for these patients and that the Kingdom carried the responsibility for its patients. The next group to be evacuated are other urgent patients, pregnant women, small babies, elderly persons in need, the families of Defence personnel station on the island, family members of some government employees and a number of tourists.
These persons will be evacuated on military or humanitarian flights. Commercial flights will not be possible for a while. “The evacuation possibilities are limited. I will repeat what I have been saying every day: we will not abandon St. Maarten.”
The first priority of the Dutch Government is emergency relief, Rutte reiterated at Saturday’s press conference, when asked about the wish of many St. Maarteners to declare Marshall Law and to have the Netherlands take over the task of governing the island. He stressed that now was not the time to have a constitutional discussion on who does what. “St. Maarten is an autonomous country with its own responsibilities.”
King Willem-Alexander and Minister Plasterk will be leaving for Curaçao on Sunday and will visit St. Maarten, St. Eustatius and Saba as soon as possible. “The King’s visit will hopefully put the people a bit at ease. He wants to show the people that the Netherlands is there for them,” said Rutte. The King stated in a short TV interview Friday that he and Queen Máxima are with the people of the islands. “It is devastating what has happened. Our hearts go out to the people,” said the King.
Plasterk stated during the press conference on Saturday that there was some communication now, even though very limited. He explained that the people have been informed via radio, flyers and megaphone of Hurricane José’s approaching. He said that an estimated 70 per cent of the homes and buildings were heavily damaged. Electricity was restored in a few areas and the main roads have been cleared.
Royal Dutch Airlines KLM made a cargo aircraft available which left for Curaçao on Saturday morning with relief supplies of the Red Cross. The aircraft of KLM Martin Air Cargo can move 60 tons of freight. The relief supplies will be flown to St. Maarten in smaller aircraft. The supplies include 8,500 tarpaulins, 9,000 jerry cans, 2,000 kitchen sets, four large generators and ten large solar panels. KLM President and CEO Pieter Elbers stated that the airline fully supports St. Maarten and expressed solidarity with the St. Maarten people, also on behalf of his personnel. “The islands are a special destination for KLM which we very much care about. We are with the people of St. Maarten,” he stated in a press release.
The goods on the KLM Martin Air cargo aircraft were funded with donations that the Red Cross has received. By Friday, the Red Cross had already collected 850,000 euros for St. Maarten, and this figure will continue to rise in the coming days. A delegation of Red Cross personnel left for Curaçao on Friday and will be transferred to St. Maarten as soon as possible.
St. Maarten will need financial assistance because it can never get out of this state without structural help, said Chairman of the Committee for Financial Supervision CFT Raymond Gradus on Saturday in an interview with deVolkskrant newspaper. “St. Maarten will need budget support or the possibility of acquiring low-interest loans,” he said.
St. Maarten’s financial resilience is limited and carrying the millions that are needed to rebuild the island cannot be provided by the local government, especially when considering that the destruction caused by Hurricane Luis in 1995 amounted to about US $2 billion.
Gradus, who was in St. Maarten up to last week Sunday for his first official visit, pointed out the importance of the upcoming tourist season. He said that with a failed tourist season and the loss of income of the people would result in reduced revenue for government, which means that there would be even fewer funds for the reconstruction.