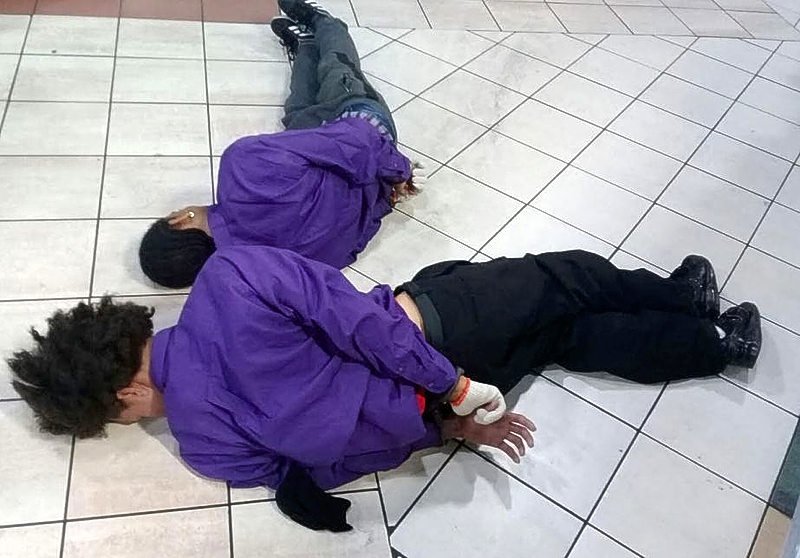 COLE BAY–Major supermarket Carrefour became the target of two masked robbers dressed in dark clothing who found their way into the restrooms of the business without being noticed and waited for the security guard on duty to use the restroom. The two men were arrested thanks to the quick response of police in the area.

The manager noticed something was off with the guard, who gave him a hand signal indicating that something was wrong. The manager quickly left the restroom and called the police. Officers came into the business in less than two minutes and spotted one of the robbers coming out of the restroom.

Police spokesman Chief Inspector Ricardo Henson said: “When the officers entered the building, they were confronted by one of the suspects coming out of the restroom with a gun in his hand. The officers ordered the suspect to drop his weapon, but he did not comply immediately, at which time one of the officers fired a warning shot.

“Both suspects chose not to resist and they were immediately arrested by the officers. They were taken to the Philipsburg police station where they are in custody for further processing. The weapon that the suspects were in possession of was also confiscated for further investigation. No one suffered any injuries during this incident.”

Sabnani commended police for the swift response and their professionalism during the incident. “The store manager who noticed that something was wrong needs to be commended also for a job well done,” he said.

This is not the first time criminals have attempted to rob Carrefour. Four masked men also tried to rob the supermarket around closing time on Sunday, November 27. They failed to get inside at the time and fled the scene before police arrived.