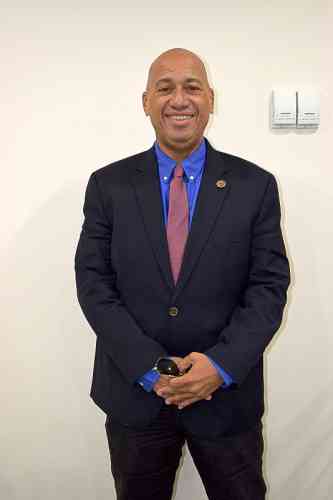 PHILIPSBURG–Member of Parliament Silvio Matser (51) was convicted by the Court of First Instance on Wednesday to a prison sentence of eight months, two of which were suspended, on two years’ probation. He was found guilty of buying votes among eligible inmates of the Pointe Blanche prison while campaigning for the August 2014 parliamentary election. He was also banned from running as a candidate for five years.

The Court said that vote-buying was a serious crime aimed at the “foundation of parliamentary democracy.” Voters were influenced to elect the most well-to-do, instead of casting their votes for the best or the most convincing candidate. This “tarnished the reputation of the democratic order in Country St. Maarten,” the Judge said in the verdict.
Pointe Blanche prison Interim Director Edward Rohan (52), who was the only suspect present to hear the Judge pronounce the verdicts, was sentenced to 160 days, 80 of which were suspended, on two years’ probation. The Court found him guilty of providing Matser with a list of eligible voters.
The Prosecutor had called for a prison sentence of nine months, three of which were to be suspended, on three years’ probation, during the January 31 hearing.
Matser, who was sentenced by the Court for tax crimes in January 2015, ran as a candidate on the United People’s (UP) party slate in the 2014 election.
Prison inmate Edeson Fleming (37) was found guilty of being an accomplice to the scheme. The Court found it proven he had recruited votes among fellow-prisoners, who received US $100 in canteen money from Matser in exchange for a vote.
Fleming was sentenced to six months, three of which were suspended, on two years’ probation, whereas the Prosecution had called for six months unconditional.
Matser, whom the Court held for the main perpetrator in this case, received the maximum sentence of eight months for election fraud, but was acquitted of membership in a criminal organisation. The Court also did not find it proven that Matser had promised licences or jobs to inmates, for lack of evidence.
Under the former electoral law, perpetrators of election fraud could be sentenced to six-months in prison, but because the Court found it proven that amounts of $100 were paid out to at least nine inmates, the maximum eight-month prison sentence was imposed.
Under the new electoral law, which came into effect in 2015, electoral bribery carries a maximum penalty of two years’ imprisonment, which was equal to the Prosecutor’s demand in Matser’s case.
Prison Director Rohan, who is currently on suspension, was convicted as an accessory to election fraud and for breaching his pledge of secrecy as a civil servant.
Rohan was found guilty of providing Matser with a list containing the names of 80 eligible detainees among the prison population of 135. In his turn, Matser, aided by inmates, Fleming among them, bribed these detainees with $100 payments to vote for him. The monies were distributed by one of Matser’s campaign-team members, who is also a suspect.
Rohan’s statements that he had also provided the list to other candidates, were dismissed by the Court, as he did not have contact with campaigners for other parties or candidates.
The Court added that Rohan had a “personal interest” in Matser, as he had requested a $15,000 loan, even though he might never have received any money.
Investigations into the results of the 2014 election revealed that UP leader Theo Heyliger was the biggest vote-getter of his party in 19 of the 20 voting districts, except in district #19 – the Pointe Blanche prison – where Matser attained the highest number of preferential votes, the Judge stated.
The combined “Octopus” and “Grastelchi” investigations involve a total 21 suspects. The cases against nine other suspects will be dismissed, while six others are still to be prosecuted, the Prosecutor’s Office said Wednesday.
Two suspects have been murdered in the meantime and are, therefore, dismissed from prosecution, whereas one suspect has remained untraceable.
The Prosecutor’s Office said earlier that it will be extra-vigilant about signs of vote-buying and -selling before and during Monday’s parliamentary election.