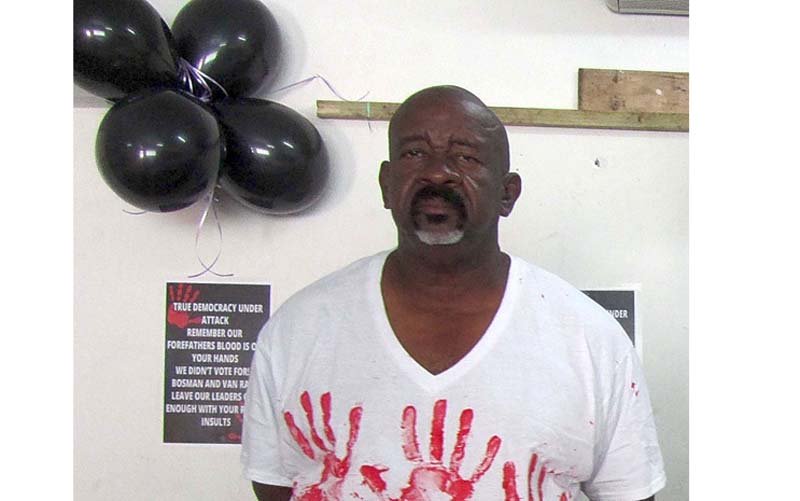 PHILIPSBURG–Despite a well-organised protest at the Courthouse on Monday with protestors calling for the release of brothel owner Etienne “Tochi” Meyers, the main suspect in the Pompei investigation, the Judge of Instruction decided on Tuesday afternoon to keep Meyers in detention for the next sixty days, after the closed door session that took place on Monday.

Meyers is the owner of adult entertainment clubs Le Petit Chateau and El Capitan. His assistant manager D.F.’s detention also was extended by 60 days, while the third suspect, brothel manager Louella Rog (50), was released. She is the second suspect to be released in the investigation. R.L.R. (47) was the first suspect released three days after the November 1 arrest.

However, the Prosecutor’s Office stated in a press release that Rog must remain available at all times for the ongoing investigation, as she is still considered a suspect. She is hence not allowed to have contact with the other suspects, is not allowed to leave the island and must refrain from having contact with employees of El Capitan and Petit Chateau.

Officers of the Kingdom Detective Cooperation Team RST assisted by members of the St. Maarten Police Force KPSM, the Dutch Royal Marechaussees and the National Detectives Agency held searches at El Capitan and Le Petit Chateau and at Meyers’ house on Monday, November 1.

The suspects were arrested that same day in connection with human trafficking (exploitation of girls working at the brothels – “animeermeisjes”), illegal confinement (locking up the girls), illegal employment and human smuggling.