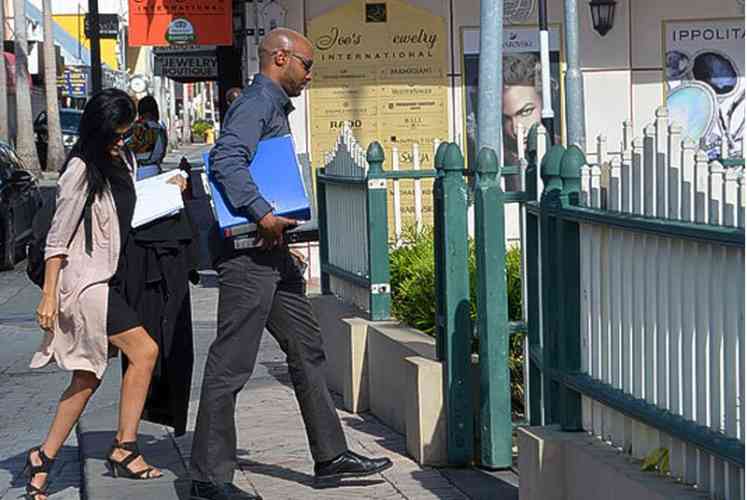 The Prosecutor’s Office is accusing Brownbill of having failed to declare income and turnover tax for US $1,262,078 in invoices paid by the St. Maarten Harbour Group of Companies to Country Construction Company’s bank account. These payments to the company, of which the MP is the sole proprietor, were allegedly made between 2009 and 2016.
The Prosecutor called for a prison sentence of 18 months and payment of a conditional fine of NAf. 250,000, on two years’ probation. The Court will present its decision in Brownbill’s case via video-conferencing on April 17.
In the Emerald investigation, seven proprietors of one-man construction businesses are accused of income and turnover-tax evasion in a corruption ring at the Sint Maarten Port from 2013-2016. In total, the companies deprived country St. Maarten of over NAf. 6 million in tax revenue, according to the tax office.
In two other cases, which were handled by the Court in February, the Judge imposed suspended prison sentences of 12 and 6 months, on three years’ probation, with 240 hours and 120 of community service, respectively.
The Prosecutor’s Office called for a higher prison sentence for Brownbill as it was held against him that while obtaining a Government salary of NAf. 12,000 per month “for a part-time job,” he had failed to pay “one cent” in taxes. “He does not provide one syllable in explaining himself while he has to answer in public,” the Prosecutor said.
Even though Brownbill will not be prosecuted for fraud, the Prosecutor said the Emerald case “unfortunately” fits in the “image of fraud and corruption” on the island, and “especially in the construction business.”
Brownbill and the other owners of one-man construction companies involved in this case were hired to carry out work in and around the St. Maarten Port.
The Prosecutor demanded “firm” sentences in an attempt to send a “clear message” that corruption cannot be tolerated, as well as to prevent further corruption in the construction industry in St. Maarten, particularly in light of the 550 million euros in recovery funds from the Netherlands which are reserved for the island post-Hurricane Irma.
“The money needs to be paid properly and should not end up in the wrong pockets. That’s the signal we want to give,” the Prosecutor said in formulating his demand.
Brownbill did not respond to questions posed by the Judge and the Prosecutor concerning the nature of the invoices submitted to the Port on behalf of his construction company. He also did not provide an explanation as to why he had sent invoices to the Port concerning work done on behalf of construction companies Devcon Ltd. and Windward Roads, and not to these companies directly.
“I make an appeal to my right to remain silent,” was Brownbill’s mantra in response to these and other questions. His attorney Zafira Ibrahim pleaded with the Court to declare the Prosecutor’s case against her client inadmissible.
The defence also made an appeal to the so-called repentance regulation (inkeerregeling) for taxpayers who had failed to file for taxes, but were willing to settle the matter out of Court.
According to the Prosecutor’s Office, however, Brownbill had started the process too late and when he already was a suspect in the criminal case.
Besides, the tax papers submitted to the tax office did not concern Brownbill’s construction company, but a sports bar, the Prosecutor said.
According to Brownbill’s lawyer, the case against her client should be dealt with by the tax authorities and not by the Prosecutor’s Office.