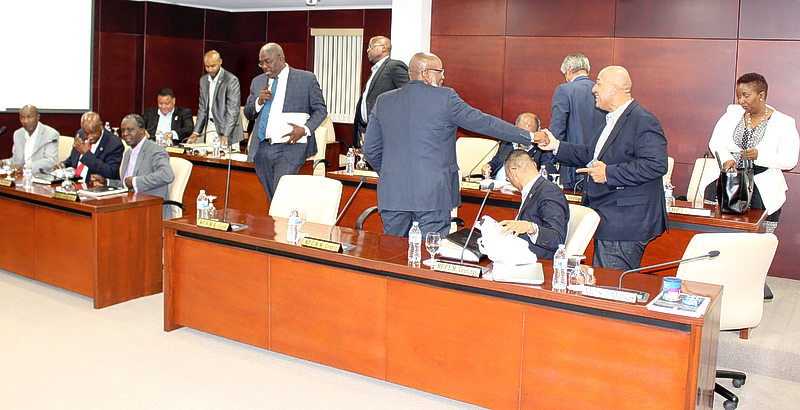 PHILIPSBURG–Having no objections to the conditions for aid from the Dutch government and amending the draft national ordinance on the Integrity Chamber to include the matters raised by the Dutch Government were amongst the resolutions included in two of three motions passed by Members of Parliament (MPs) on Thursday.

The motions were passed during an urgent sitting of Parliament on November 2, in which a motion of no confidence was also passed against six of the seven governing Ministers (see related story).
In the first motion, MPs committed to follow the principles of integrity, transparency and good governance; to devise a clear and actionable economic plan developed in cooperation with the community; and to manage the labour market and skill development programmes to ensure maximum employment of residents. They also agreed to work together to bring about stability, tranquillity and hope through fast-track and sustainable economic development, and pledged to “spare” the people of St. Maarten any political uncertainty and any talk of elections at this time.
MPs also agreed to amend the draft national ordinance on the Integrity Chamber and to include matters raised in the letter of the Dutch Minister of Kingdom Relations dated October 13. The motion also calls for the Justice Minister to be instructed to negotiate a mutual agreement with his Dutch counterpart to realise cooperation as recommended in the letter by the Dutch Minister of Kingdom Relations, as well as the draft presented by the Dutch government to St. Maarten on October 31.
This motion takes into consideration the island-wide devastation and destruction caused by Hurricane Irma; the need for immediate aid and long- and short-term reconstruction funding; the commitment from the Kingdom Government to provide aid to St. Maarten; the impasse surrounding the distribution of reconstruction funds from the Kingdom Government to St. Maarten for the welfare of people of St. Maarten; the need to rebuild and the wide scale need for reconstruction.
The second motion was also passed by the eight members of the new coalition of eight. MPs in the minority fractions were not present in the hall during voting.
In the second motion, MPs agreed to not express any objections to the draft Integrity Chamber ordinance with the amendments recommended by the Dutch Government in its letter to St. Maarten on October 13, and presented in draft to Prime Minister William Marlin on Tuesday, October 31. They have also agreed to express no objections to the draft mutual agreement on border control as presented to Minister of Justice Rafael Boasman on October 31.
The second motion takes into consideration the ongoing negotiations between the St. Maarten and Dutch governments regarding reconstruction aid and conditions attached to this aid. It also considers the “uncertainty,” due to lack of clarity by the Government of St. Maarten on the conditions, “put the receipt of the funds slated to be in hundreds of millions of euros in serious jeopardy.”
MPs said in the motion that they understand the implications of the deadlock between the Netherlands and St. Maarten on the conditions imposed by the Dutch government. These conditions are agreed-on Integrity Chamber ordinance and agreed-on mutual agreement on border control, the motion says.