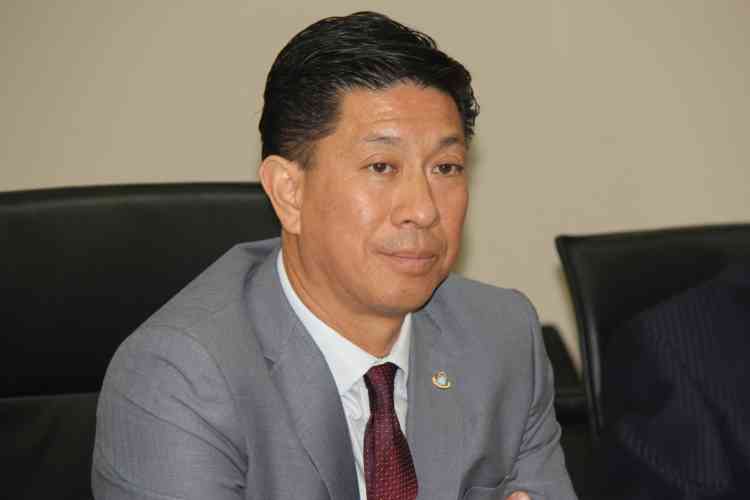 PHILIPSBURG–Members of Parliament (MPs) sent Minister of Health, Labour and Social Affairs VSA Emil Lee packing when they passed a motion of no confidence in him late Tuesday evening.

The motion, which was presented by governing coalition member United Democrats (UD) MP Luc Mercelina, was passed by all seven members of the opposition and Mercelina voting in favour and the seven remaining members of the coalition voting against. The passing of the motion goes down in history as the first time an MP in St. Maarten initiated a motion to dismiss a minister appointed by his own coalition.

Prior to the passing of the motion Lee sought to have Mercelina abstain from voting on his motion. He quoted Article 53 of the constitution, which states that MPs shall refrain from debating and voting on issues, including appointments, suspensions and dismissals, that personally concern them, their spouses or relations by blood or affinity to the second degree, or in which they are involved as mandatories.

Lee said that considering that Mercelina and his spouse both are employees of St. Maarten Medical Center (SMMC), that Mercelina has expressed strong opinions on Lee’s policies regarding SMMC, that Mercelina mentioned matters concerning SMMC on eight different occasions in his consideration accompanying the motion of no confidence against him, and that the motion further explicitly mentions a prohibition on Lee as “caretaker Minister” taking any decisions that will bind St. Maarten to the construction of a new hospital, Mercelina should not participate in the voting on the motion.

“We bring it to the attention of the Chair of Parliament that in the opinion of government, any vote on above-mentioned motion of no confidence by MP Mercelina would be in contravention of Article 53 section 1 of the constitution.

“In light of his and his spouse’s clear and strong personal interest in matters concerning the hospital, and the clear connection that is made in the motion between matters concerning the hospital and the motion, government seeks an authoritative interpretation by Parliament of Article 53 section 1, pertaining to the situation of MP Mercelina voting on the motion of no confidence against the Minister of VSA, tabled by the same MP,” Lee said.

After consultation, Chairperson of Parliament Claude Peterson, sitting in for Sarah Wescot-Williams, overruled Lee’s concerns and permitted Mercelina to vote.

In motivating his vote, United St. Maarten Party (US Party) MP Frans Richardson said he believes a message must be sent that ministers need to take their responsibilities more seriously. He said Finance Minister Perry Geerlings, who survived a motion of no confidence, “got away today,” but cautioned ministers to respect the House of Parliament and when parliament calls on ministers.

United Democrats (UD) MP Sarah Wescot-Williams referred to the late Roy Marlin, who she said was short of being executed for a project he had initiated with Intaquin, only to hear that had that project been executed, St. Maarten would have been further today with the issue of sewage in St. Maarten.

Wescot-Williams said the biggest issue affecting parliament is the matter of double standards. She said the xenophobia being displayed in parliament “will come back to haunt us big time.”

NA MP Christophe Emmanuel said he too had been a young minister when he was ousted from government. After the then-NA-led government received a vote of no confidence after the 2017 hurricanes, Emmanuel said Lee had become a “monster,” adding “but today, it will come back to bite you. What is good for the goose is good for the gander.” He said it was amazing that persons can only remember certain things, and referred to Lee as “a bad minister for St. Maarten.”

NA MP Ardwell Irion revealed that after Hurricane Irma he personally had visited the home of the Chairperson of Parliament, without the knowledge of his fellow MPs, and called for parties to work together because he did not want an election. He even had offered to give up his seat to force parties to work together, to no avail. “Today, it comes back to haunt you,” he said.

Lee had said in closing remarks after answering questions in the second round that if the coalition had asked him to step down, he would have gladly done so.

He said Mercelina seemed to be struggling with blurred lines, balancing his diverse and conflicting perspectives.

“As a matter of fact, for the record, I believe that an actively practicing MD [medical doctor – Ed.] that disagrees with the vision and actions of the Minister of Health, despite being in alignment with the governing programme, is using his other function of MP to exert influence, and ultimately to bring a motion of no confidence against the minister,” Lee said.

Lee also debunked the points made by Mercelina in his motion.

Regarding the point that there was no evidence of results in restoring a strong social fabric through the Ministry of Social Affairs and Labour post-Irma, Lee said the regular activities – financial aid, medical aid, legal aid – all support the social fabric and post-Irma projects such as the Emergency Income Support Training Programme, Reintegration Shelter, and basic necessities vouchers that have all been aimed at supporting the social fabric.

On the issue of labour and the abuse of the short-term labour contracts, Lee said the return to Parliament on this issue has been delayed due to discussions regarding maternity and paternity leave.

“It has taken time to get proper advices and consultation with stakeholders. We are ready to return to Parliament as soon as scheduled. Even during recess.”

Lee also addressed and debunked the other points in the motion.

Mercelina made clear in the motion that any minister who receives a vote of no confidence by parliament must make his or her position immediately available to the Governor of St. Maarten. “In other words, the minister has to resign immediately,” the motion read.

The motion also sought to prohibit Lee from signing off on any agreements and/or contracts or any long-term policies or financial engagements that might obstruct or encumber any new incoming VSA Minister “from functioning adequately and that may commit and/or affect and/or bind the country for a long time/term in whatever way.”

The motion also requested that Lee, as a caretaker minister if the motion of no confidence was passed, instruct the Social and Health Insurances SZV management and board to refrain from entering long-term financial commitments, hiring of new personnel in management functions, entering into long-term agreements and signing any contracts that might affect or bind SZV in one or the other way for a long time.

He is also “instructed” not to take any decision as caretaker VSA minister that will bind St. Maarten or entities in question to the construction of a new hospital.

Mercelina said in the motion that Lee is “being held personally responsible for any decision taken following this motion of no confidence against him that may have serious financial and administrative consequences for country St. Maarten and/or government-owned companies and/or entities such as the SZV.”