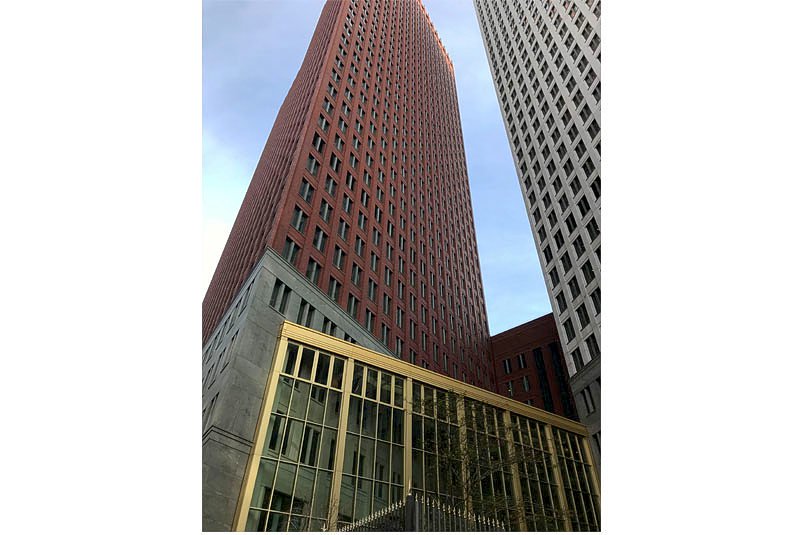 The Ministry of Home Affairs and Kingdom Relations BZK in The Hague. (Suzanne Koelega photo)

THE HAGUE–The Dutch Government will definitely not let up on the conditions that it has attached to the setting up of a Reconstruction Fund for St. Maarten. “The preconditions of an Integrity Chamber and a solid border control remain. There will be no fund if those preconditions are not accepted.”

Dutch caretaker Minister of Home Affairs and Kingdom Relations Ronald Plasterk, in the last days of his tenure, spoke clear words on Monday in response to the statement of St. Maarten Prime Minister William Marlin on Sunday who said that his government will not accept the Dutch preconditions, accusing the Netherlands of keeping the island hostage.

“In the interest of the St. Maarten people, the Netherlands will hold on to the set preconditions, which are supervision on integrity and reinforced border control. Prime Minister Marlin is always welcome for talks, but these logical preconditions will remain,” stated Plasterk in an initial statement to the media Monday morning.

In an interview with The Daily Herald later on Monday, Plasterk provided more clarity on the Dutch reasons. “Integrity is always a sensitive issue where ever in the world large sums are invested in construction projects. You don’t want the money end up in the wrong hands.”

The Minister referred to the different integrity committees which have assessed the situation in St. Maarten a while back and arrived at the conclusion that there are integrity issues. “It is that combination that we as Dutch Government cannot agree to invest a large sum without preconditions. Without those preconditions, the country will be worse off, instead of better,” he said.

The deployment of an additional 30 members of the Royal Dutch Marechaussee and the Customs under the authority of the local Minister of Justice would serve as an extra reinforcement to protect the borders against illegal immigration, the Minister said. “I am surprised that politicians are objecting in such a manner for we had already agreed that the Integrity Chamber would be established by October 31, and the considerable input in the border control only helps the island.”

According to Plasterk, who is in his last few days in government with a new cabinet taking the oath this Thursday, there was “never a moment of doubt” in the current Dutch Government that there would be preconditions. But there has also been the wish to “considerably contribute” to St. Maarten’s reconstruction. He expected no change of heart of the new government on this matter. “You can assume that the new cabinet will continue this policy.”

As for the amount that the Netherlands would invest, Plasterk said that he would not provide a ballpark figure until the preconditions have been agreed upon by Philipsburg, not the other way around as Prime Minister Marlin wants it. He said that the assistance would have to be justifiable. “Everybody has an interest that things happen the correct way.”

Intervention of the Kingdom Council of Ministers via article 51 of the Charter is a technical possibility, but the Minister didn’t want to anticipate on that. He said that both governments preferred to arrive at a joint agreement. “That proposal is now on the table. I am not going to anticipate on what will happen if St. Maarten does not accept this proposal. But let there be no mistake that the preconditions are dead serious and that the Netherlands will not deviate,” said Plasterk, who added that he made this aspect very clear in a long telephone conversation that he had with Marlin over the weekend.

The stand-off between the two governments puts the reconstruction of St. Maarten after Hurricane Irma in danger. Not only might the island miss out on much-needed financial assistance from the Netherlands, but also from the European Union (EU), as it is expected that The Hague and Brussels will work together on the execution of the reconstruction aid.

Asked if the Reconstruction Fund was indeed in danger, Minister Plasterk said this would not be the case if the St. Maarten Government would approve the preconditions. “Once they agree, we can have the fund up and running within a few weeks.” He said that he was under the impression when he visited St. Maarten after the hurricane, twice in fact, that the people were eager to see the Reconstruction Fund materialise.

According to unconfirmed reports, the Dutch would invest 200 to 300 million euros in the fund. Plasterk has said from the start that the Netherlands was most willing to assist with the reconstruction of St. Maarten, but that there would be hard conditions. These conditions were also demanded by the Second Chamber of the Dutch Parliament, which has an important say in this matter.

Member of the Second Chamber of the Dutch Parliament Ronald van Raak of the Socialist Party (SP): “It is terrible that St. Maarten’s reconstruction has become the subject of political games and the long toes of government representatives. We have to and want to help the people of St. Maarten. But the disaster will become even greater if those hundreds of millions of aid end up in the wrong pockets.” (By Suzanne Koelega)