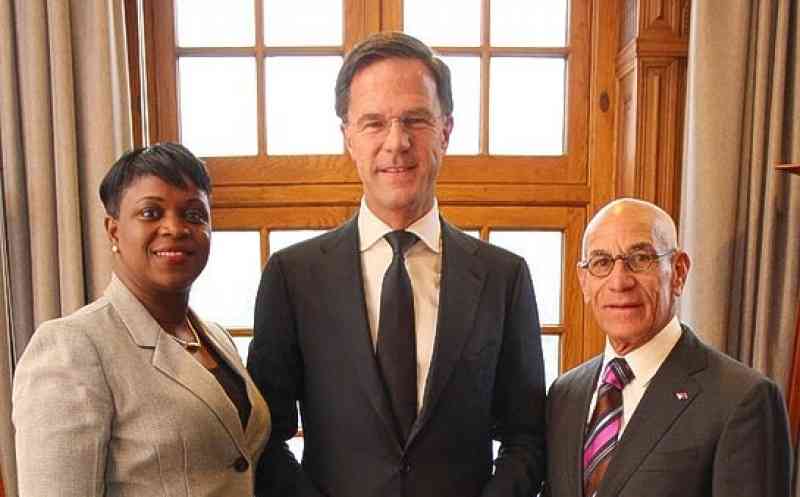 THE HAGUE–St. Maarten looks forward to clarity about the funds that are destined to finance St. Maarten’s recovery. That in a nutshell is the general message of Prime Minister Leona Romeo-Marlin and Minister of Finance Michael Ferrier in The Hague.

They met with Dutch Prime Minister Mark Rutte on Thursday and will have a meeting with State Secretary for Interior Affairs and Kingdom Relations Raymond Knops and Windward Islands Reconstruction Programme Director-General Hans Leijtens on Friday.
“This morning we had a great meeting with Prime Minister Mark Rutte. We gave an update of running processes, such as the Integrity Chamber, border control and the Recovery Fund. The meeting was very positive. He understands our plight and knows where we are coming from,’’ said Romeo-Marlin.
Explaining the current status to Rutte, Romeo-Marlin and Ferrier mentioned the National Recovery Plan which is practically completed.
“We have been proactive and set up the framework for a project bureau that will execute the National Recovery Plan. We are in the process of getting that approved by the Council of Ministers,’’ Romeo-Marlin said. “We are trying to formalise how this plan will be applied, but have to do this in a format that is acceptable by the standards of the World Bank. St. Maarten has no choice but to speed up things in order to get to that standard. Unfortunately, everything takes time. And until everything is in place, we simply cannot access the needed funds.’’
Another urgent issue is clarity about the 550 million euros that is available for the recovery. Ferrier said that to properly amend the 2018 Budget, he needs to know what part will be a grant and what part will be a loan. The more that is received by St. Maarten in the form of a grant, the better the country’s liquidity position will be. This in turn will determine the interest rates for all other loans, not only for the Government, but also for entrepreneurs who want to invest and rebuild their businesses in St. Maarten.
Both Ministers explained to Rutte that the people of St. Maarten are anxiously awaiting financial and other support.
“Prime Minister Rutte was extremely understanding of our situation and committed to do whatever he can do to help speed up the process, but his hands too are tied by the laws, rules and regulations,’’ said Ferrier.
Romeo-Marlin and Minister Ferrier also mentioned during the meeting the liquidity shortages for 2017 and 2018 with which they have to deal due to Hurricane Irma-induced income reductions and increased expenditures of Government. In the pipeline are spending cuts and efforts to increase income. Last week, the Dutch Government offered St. Maarten a 50-million-guilder loan to improve its liquidity position.
Marlin-Romeo and Ferrier will also use their visit to meet students and persons who were evacuated from St. Maarten to the Netherlands after Hurricane Irma. “We want to know how they are doing and to encourage them to come back home to help rebuild the country,” they said.
First and foremost, however, they want to express their gratitude for the help they received during and after Hurricane Irma.
“The people of the Netherlands have shown St. Maarten an outpouring of concern and love through various fundraising efforts. It is only right to come back to these people and say, ‘THANK YOU!’ This is one of the reasons we have travelled to the Netherlands,’’ said Romeo-Marlin.
She confirmed that the people of St. Maarten are benefiting from the money raised, through various programmes conducted by the Red Cross on the island.
“We owe a lot of gratitude to the Dutch people. Not only for their compassion, but also for their unrelenting raising of funds in aid of our battered community. A huge THANK YOU for the 13 million euros raised for St. Maarten and donated to the International Red Cross for distribution on our island,” said Ferrier.
Also a topic of conversation was the Dutch Government’s ongoing lack of trust in the body politic in St. Maarten. “Unfortunately, yet another member of the highest institution representing the people of St. Maarten is under investigation. However, the governments of both Holland and St. Maarten have confidence in the process of the legal system, which should be allowed to run its course,” Ferrier said.