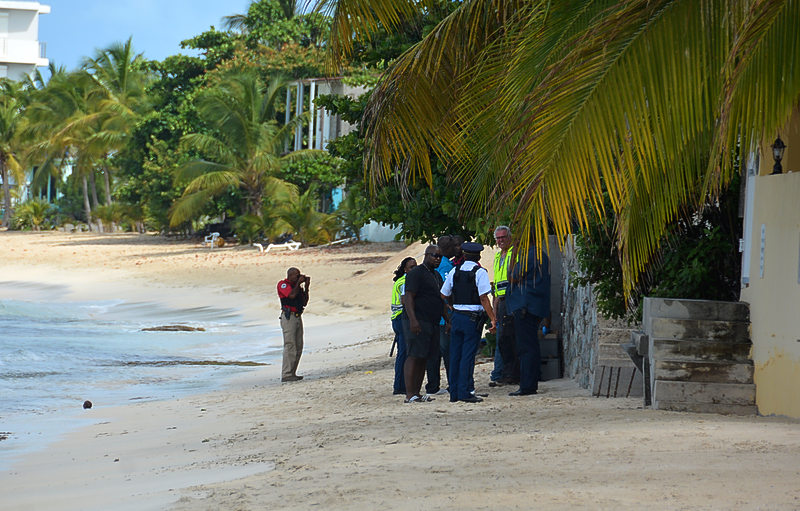 COLE BAY–Two men stormed into Scotiabank at Simpson Bay Yacht Club on Friday morning just before 9:00am, although four persons apparently were involved. One man was shot, one sustained a minor injury and all four were nabbed by police.

The two men smashed the entrance security glass door and took an unspecified amount of money from the bank. Scotiabank security officers and staff managed to sound the alarm and alert police that a robbery was taking place. The men ran to an unmarked Hyundai Accent with tinted windows that was parked outside the bank and drove away.

Off-duty police officers who were also following the messages from the dispatch centre got involved in the search for the vehicle and the robbery suspects. Phone calls flooded the Police Emergency Communications Centre with descriptions of the suspects and the vehicle.

Police spokesman Chief Inspector Ricardo Henson said, “A Hyundai Accent without any licence plate was spotted by police driving through Simpson Bay. A high-speed chase immediately followed at which time the suspects abandoned the vehicle and took off on foot. A foot chase followed on Simpson Bay Beach at which time one of the suspects pulled a high-powered assault rifle from under his shirt and aimed it at the officer in pursuit.

“This left the officer no other choice than to fire directly at the suspect. The suspect dropped his weapon and continued to flee, but had to stop because he had been shot. The suspect was immediately arrested.”

While fleeing from police the suspect also dropped a 45-calibre handgun. The suspect’s rifle was identified as an AK-47. Both weapons were confiscated for further investigation. The wounded suspect was treated on the scene by paramedics and then transported to St. Maarten Medical Center (SMMC) for further treatment.

“The search for the other suspects turned into a massive operation in the Simpson Bay and Cole Bay areas consisting of police patrols, Customs Department, Coast Guard and the Gendarmes who were situated on the borders.

“Due to the great working cooperation between these departments within less than half an hour three other suspects were arrested in this case. During these arrests a bag containing a large amount of cash that was stolen from the bank was found and confiscated,” Henson said in the police report.

Police Chief Carl John is said to be very proud and commends his police officers for a job well done and for demonstrating their level of professionalism. He also thanked all other organisations that were involved in the operation for their tremendous input and is looking forward in taking the working cooperation to the highest level.