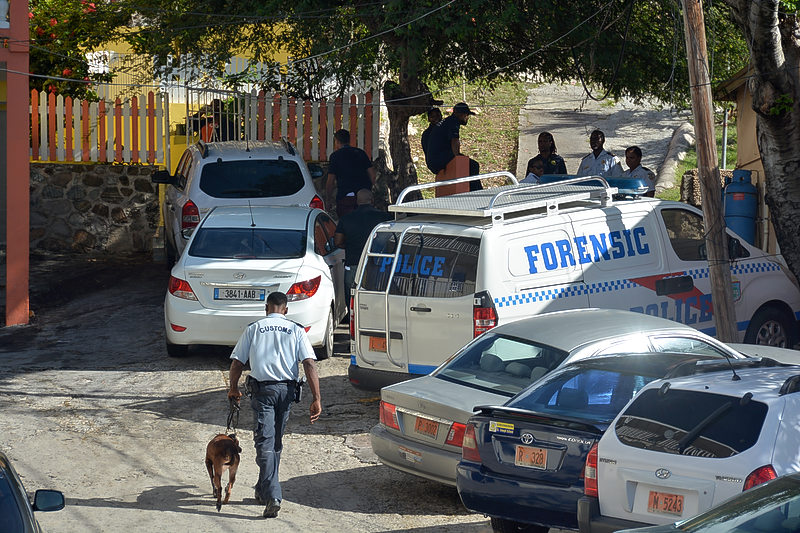 PHILIPSBURG–The Prosecutor’s Office painted a pitch-black picture Tuesday of the daily routine at Casa Blanca brothel in Oyster Pond between 2010 and 2015. In calling for prison sentences ranging from four to eight years, the Prosecution found it legally and convincingly proven that a large number of women were exploited for the financial gain of the adult entertainment centre’s owners and managers.

In the so-called “Papegaai” investigation, which was launched on November 16, 2015, with the arrests of suspects and a number of searches, Casa Blanca N.V., company director A.T.M.R. (39), his wife and assistant manager J.P.R. (45), assistant manager D.J.E. (32), owner of the Casa Blanca building C.J.P. (67), and then secretary/administrator M.J.P. (41) are suspected of human trafficking, illegal restraint at the brothel, illegal firearm possession, and of evasion of payment of turnover and profit tax to the amount of NAf. 430,000.

Prosecutors Maarten Noordzij and Danny Hazejager asked for eight years in jail for director A.T.M.R., and for seven years’ imprisonment for J.P.R. Both defendants may also have to pay NAf. 200,000 in fines for the tax crimes, or spend 365 days in jail, in case of non-compliance.

The Prosecutors called upon the court to sentence C.J.P. to five years and D.J.E. to four years in jail. Casa Blanca may also have to pay a fine of NAf. 30,000.

Due to the severity of this case, the Prosecution also demanded the immediate execution of prison sentences. The case against M.J.P. was postponed until further notice for medical reasons.

During the investigations some 23 women accused Casa Blanca’s management of abuse and keeping them against their will while employed at the brothel. In their statements some of the women said they were forced to work during their menstrual cycles and were abused by management. According to the Prosecutor’s Office the women hardly ever had the day off and had to work for six to seven days per week.

Witnesses testified extensively about the deprivation of their liberty, a fine system, and debts of up to US $3,000 because of unreasonable cost which they had to pay off by having sex with customers against a $50 fee, threats of violence, extortion, misleading, exploitation and human trafficking.

Prostitution may be legal in St. Maarten, Prosecutor Noordzij said, but according to him, part of the women were lured to come to St. Maarten under false pretences, after which they felt they had no choice but to prostitute themselves as they had become financially dependent on their employer.

The Prosecutor agreed that the Government of St. Maarten had failed in monitoring and controlling the prosecution sector, but said this would not help the suspects as they are responsible for their own acts.

He said they did not care about government rules as the women were employed for periods of between 10 and 14 months, whereas they were officially allowed to work on St. Maarten for six months only. But with inside help from workers at the Immigration and Border Protection Service and the Inspectorate of Public Health, Social Service and Labour persons were allegedly put on the list anew. Also, the brothel’s management was allegedly tipped-off about imminent inspections.

The suspects denied the allegations, and said the women working at the brothel were not deprived of their liberty and only had to pay off the cost for airplane tickets, their visa and work permits. C.J.P. told the Judge that she had no idea why she had to stand trial as she was not involved in the club’s daily operations.

The prostitutes, who hailed from the Dominican Republic, Colombia and Venezuela, stated they had to pay for almost everything, even for condoms. Besides, mandatory lunches and dinners at Casa Blanca’s restaurants were prescribed. They also had to go to the Club’s hairdresser once a week, had to have their nails done, and buy clothes and shoes. They were also charged a daily rent of $60 for their shared room, which were described by the Casa Blanca director as “hotel rooms.” The Prosecutor quickly calculated that this yielded Casa Blanca the “astronomic” amount of $4,000 per month per shared room. The women also had to pay for their weekly doctor’s visits.

In 2010, Border Bar, which was owned by C.J.P.’s brother, was investigated. In March 2012, Angel Priest was sentenced to 54 months, 18 of which were suspended, for the sexual exploitation of women from the Dominican Republic at the bar for a period of six months.

According to the Prosecutor, the bar had the same modus operandi as Casa Blanca where it concerned the hiring and exploitation of women. Furthermore, certain women were transferred from Casa Blanca to Border Bar as part of Casa Blanca’s extensive fine system.

Casa Blanca also manages Zeelandia Lounge on St. Eustatius, which was recently closed on the Island Governor’s orders. Even though there are indications that women working on Statia were also exploited, this court case only deals with the situation on St. Maarten.

Rats in a trap

The women working at Casa Blanca cited horrendous conditions under which they were forced to work and live. They were housed, two on two, in small underground rooms without ventilation or air-conditioning. They also had sex with their clients in these same rooms.

A.T.M.R. told the Court that he had not agreed with many stipulations in the worker’s contracts, but said it had been beyond his control to prevent other persons in management to act otherwise.

The women worked Sunday-Thursday from 8:00pm to 4:00am, and Friday and Saturday from 8:00pm to 5:00 or 6:00am. After that they were locked in the brothel’s basement section. They had nowhere to go until the day crew arrived at 9:00am. In case of a fire the women were like rats in a trap, as one of them had told the police.

By contrast, defence lawyers Shaira Bommel and Sjamira Roseburg focussed on the women who had given statements in which they said they had enjoyed working at Casa Blanca and had never been forced or coerced. They said only a small portion of the women had actually complained, and pleaded for their clients’ acquittal.

Lawyer in the tax cases Richie Kock claimed that the cases against his clients should be thrown out. Citing a High Court ruling he claimed his clients could not be charged with human trafficking and with having a taxable employment relationship with the women at the same time. The Court will give its decision April 4.