Home Local News UPDATE: PSVE teachers down tools and sit in over uncertainties in vacation... 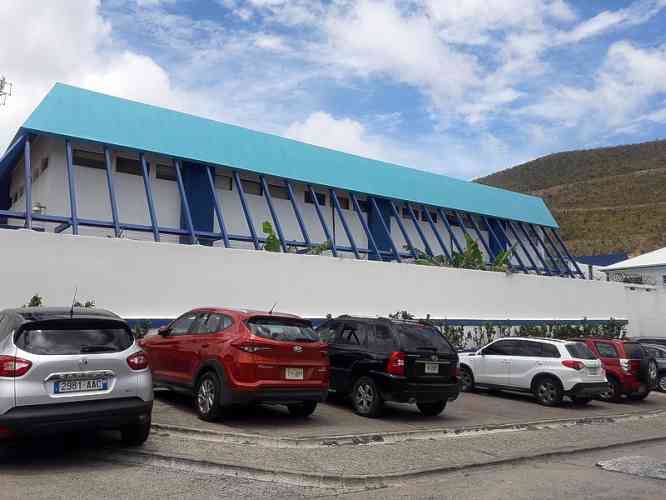 ~ Board wants official position from govt. ~

EBENEZER–An exam and classes at the Preparatory Secondary Vocational Education (PSVE) section of St. Maarten Academy were interrupted on Wednesday when the majority of the teachers downed tools and held a sit-in from mid-morning over uncertainties about whether their 2019 vacation allowance will be paid.

Teachers plan to continue their actions today, Thursday, as they received no definitive answer as to whether the allowance will be paid up to the end of the school day yesterday.

About NAf. 530,000 is needed to pay vacation allowance to those who are entitled to it at the two Academy schools. The two schools have a total of 140-plus staffers, most of whom are teachers.

When contacted for comment, Foundation for Academic and Vocational Education Chairperson Roland Duncan made it clear that the “no work, no pay” rule will be applied to teachers who choose not to work.

Regarding the vacation pay, he said the board is waiting on an “official position” from Education Minister Wycliffe Smith before it sits and decides how to proceed with the matter.

“I am planning to do nothing right now. I am waiting to see the response from government and based on that response I will sit with the board and decide what to do,” Duncan said. “I want a specific position from government.”

Teachers who participated in the action are furious over not hearing anything concrete about their allowance. During Wednesday’s sit-in, teachers sat in the staff room at their school and waited on word on the payment.

One teacher told The Daily Herald newspaper that the PSVE Principal had not addressed teachers during the sit-in. It is understood that the assistant principal, a human resource worker and Peter Gittens, Chief of Staff of the Cabinet of the Education Minister, addressed the teachers during their sit-in. None of the officials gave any concrete information on when payment will be made.

“Everyone is uneasy about what’s going on,” one teacher said. “We have no definite answer on when it should be paid.”

As a result of the sit in, one exam for students who are to be assessed for promotion to another class could not be held. Teachers also plan to not mark exams if they cannot receive concrete word on when they will be paid.

Duncan is expected to address teachers today on the issue.

In an invited comment on the effects of the sit in, PSVE Principal Lavern Nelson told this newspaper late last night that teachers have a legitimate concern.

“To lessen the impact on our students during this test week period, some teachers and support staff invigilated [exams – Ed.]. As such, the exams for our pre-exams level and second formers were completed today [Wednesday]. The one exam missed for the first form level will be administered during the make-up period already on the examination schedule of our students,” she said.

Principal of the Academy’s Academic section Tallulah Baly-Vanterpool has been communicating with her teachers on the matter. She told teachers in a memo dated June 18 that she has been checking in with the board for an update on vacation allowance and renewal of contracts, but she has not received any assurances this far. She promised to update teachers as soon as she received information.

“As management, we want you to know that we appreciate your continued commitment to our students and your responsibilities,” she said in the memo.

“I also pointed out to him that I am holding government liable for the funds that have to be paid for the vacation allowance,” Duncan said, pointing out that the drop in subsidy for the school has resulted in serious financial constraints.

“We have to reduce staff. We are trying to deal with it as expeditiously as possible. We have dropped in enrolment, which means we are offering fewer teaching hours because we don’t have the students. This also means that there are teachers who will be without hours to teach. We have to terminate those teachers and I have no trust in the minister, as he is acting now, that enrolment is going up in August and he will correct it.”

When asked about the matter during the Council of Ministers press briefing on Wednesday, Education Minister Wycliffe Smith said the Education Ministry ensures that subsidy is granted to schools and included in this is monies for salaries and vacation allowances. He made clear that schools manage the funds that they receive and they are the ones who have to ensure that teachers are paid salaries and vacation allowances.

He said also that he has not received any reports that teachers at PSVE will not be paid their vacation allowances.

Smith had said during a recent parliament meeting that vacation allowances must be paid by subsidised schools as scheduled, as this cost is covered by government in the lump-sum subsidy given to school boards.

He said at the time that taxpayers’ money must be spent wisely by government and, by extension, by those who receive the funds from government, adding that subsidised funds should not be misappropriated and therefore, the vacation allowances of teachers and school staff should be paid by all subsidised school boards as scheduled.

Government, through the lump-sum subsidy system, covers all the cost associated with personnel expenses at government-subsidised schools. This includes all salaries linked to functions listed in the function book as laid down in the education remuneration decree; vacation salary, which is an integral part of teachers’ basic salaries; as well as benefits and allowances, contributions to pension, widowers’ and orphans’ insurance premiums, Smith said at the time.

Commenting on the minister’s statements, Duncan said: “I don’t think the minister can count. We have sent monthly calculations to him. Vacation allowance is about NAf. 500,000, so every month, we [are supposed to – Ed.] take out between NAf. 45,000 and NAf. 50,000 and reserve that to be paid in June [for vacation allowance], but if you cut the subsidy by NAf. 100,000 where is the reserve? It is simple arithmetic.”

Duncan said that if the board is forced to pay the allowance in its current financial situation, then taxes, social insurance payments and utility payments will not be made.

“As we have told them, I am holding government liable,” Duncan said challenging the minister to investigate the school to determine whether it has funds or not.