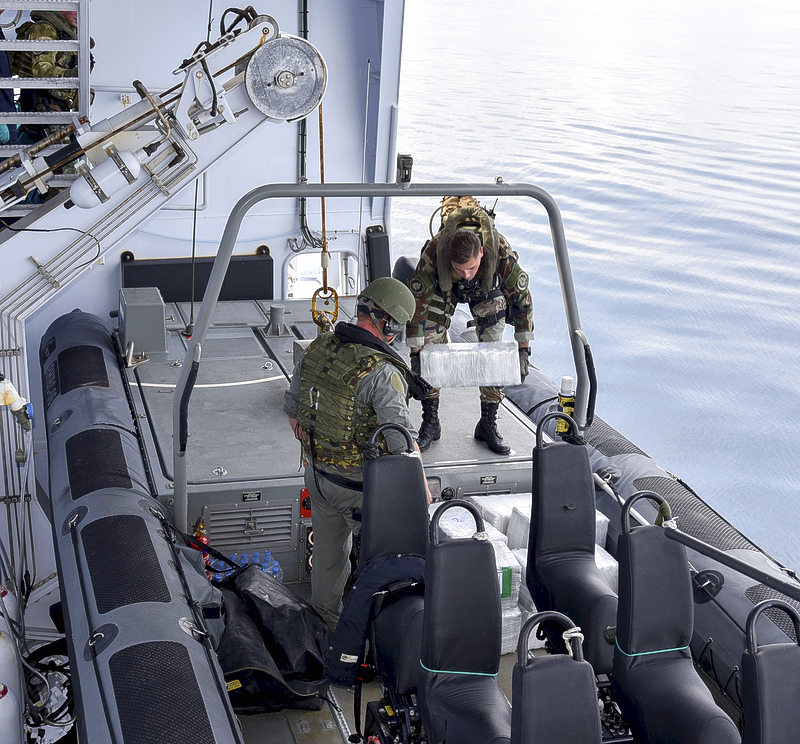 PHILIPSBURG–Zr. Ms. Holland, the Royal Dutch Navy patrol ship that is currently carrying out its duties in the Caribbean with a Coast Guard boarding team, intercepted 220 kilos of a “drug-like substance believed to be cocaine” near the Windward Islands on Saturday.

When authorities spotted the offloading of suspected smuggled goods onto a go-fast boat, two fast raiding interception and Special Forces craft (FRISCs) were launched from the Zr. Ms. Holland. After a high-speed chase, the FRISCS and the Dash-8 patrol aircraft managed to bring the go-fast to a stop. The three crew members were arrested and the contraband seized. The other boat got away.

Once the seized shipment was brought on board the Zr. Ms. Holland, further investigation showed that the shipment contained 220 kilos of a “drug-like substance perceived to be cocaine.” The Navy ship took the vessel used by the smugglers in tow and carried the drug traffickers, the seized bales and the vessel to the St. Maarten authorities. Police took the three men to the Philipsburg police station for further questioning.

The Prosecutor is tight-lipped about the investigation and said he would release more information about the arrests at a later date.

The Zr. Ms. Holland will continue to carry out its Coast Guard duties in the Caribbean during the coming period. Counter-narcotics operations are one of the ship’s most important tasks.