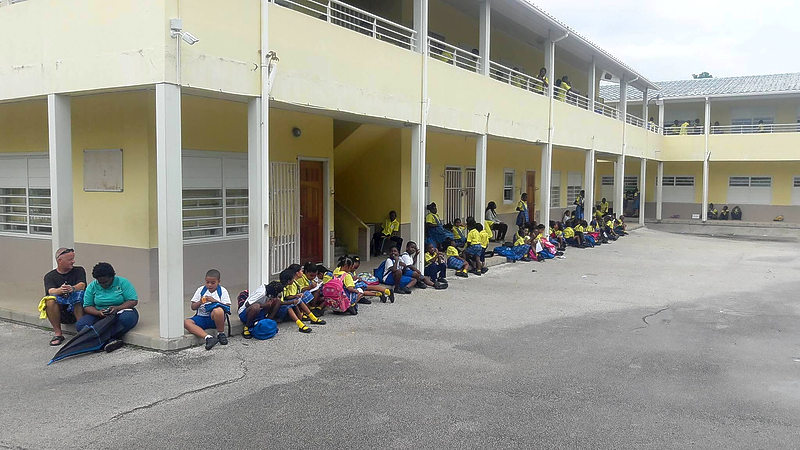 CAY BAY–Teachers at Leonald Conner Primary School were fed up with the health hazard at the campus caused by sulphur dioxide in the air and decided early Tuesday morning not to open their classrooms for pupils to attend classes.

The Minister explained in the meeting that she is dealing with the situation and is working with the Health Department and the Department of Education to place air conditioning (AC) units in each classroom to limit any exposure. She reiterated her statement that this situation clearly indicates the need for more in-depth investigation, assessment and monitoring by the Public Housing, Spatial Development, Environment and Infrastructure VROMI and Public Health, Social Development and Labour VSA Ministries.

Pupils were seen sitting outside the classrooms on Tuesday morning while parents came to pick them up to take them back home.

After meeting with the Minister, teachers continued discussions with their union and decided to not go back to work until the school is power-washed and each pupil is given a mouth-cap. Elshot said the teachers had her full support and it was time for something to be done at the school, as it was an occupational health and safety issue.

Minister Jacobs informed The Daily Herald that she wanted to make sure that all persons involved knew and understood that the challenges with air pollution negatively affecting the pupils and staff have the attention of the Ministry of Education, Culture, Youth and Sports. In a press release on Tuesday evening she outlined plans to address the issue head-on.

“The Inspectorate ECYS, VSA and VROMI as well as the Fire Department are actively seeking solutions to alleviate the symptoms being experienced at the school. Measurements of the levels of gases in and around the school and the surrounding Cay Bay areas have been made over the past six days at varying times during the day.

“The group of Inspectors and the Fire Department met again on Tuesday and recommendations will be sent in writing to the relevant Ministers as well as GEBE and other stakeholders,” stated the minister in the release.

Several actions being undertaken by the Ministry were discussed: Cleaning of the school to remove the fine dust started Tuesday to be finalised today, Wednesday. The electrical upgrade necessary to carry the load of the new units will take place. ACs will be installed – no emissions were measured in classroom currently equipped with ACs.